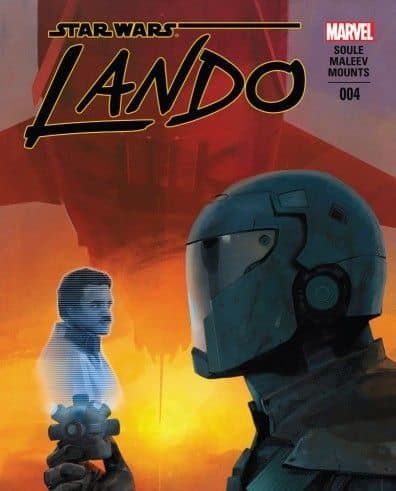 Lando’s gonna be rich! But, to quote Han Solo, “what good is all that money if you’re not alive to spend it?”

Sava Korin Pers, crotchety antiquities specialist and reluctant member of Lando’s crew explains to Lando that the store of ancient Sith artifacts they discovered could most certainly be worth a lot of money. Before they can celebrate, Aleksin and Pavol, the other members of Lando’s crew, learn the true cost of those Sith artifacts while Chanath Cha, the Emperor’s assassin, infiltrates the ship…

This is LANDO’s best issue yet. The writing is tight, the art plays a bigger role, and, as the scope widens, the story gets much more exciting. 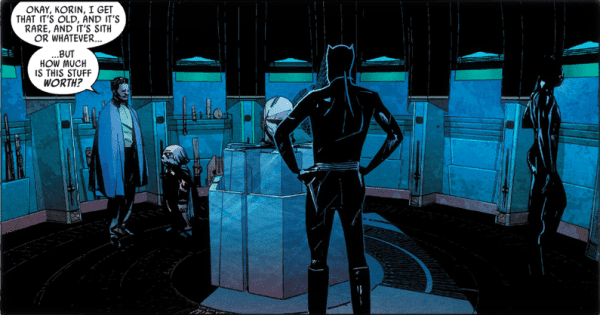 Aleksin and Pavol, Lando’s two panther-like assassins, are front and center this issue. After finishing this issue it became painfully obvious to me that if anyone was going to be the stars of the best issue so far, it was going to be those two. They were introduced as potential badasses in LANDO #1, gave us a taste of that in #2, followed-through on that promise in LANDO #3, and have done so while remaining cool and silent and imposing. Their skill and stoicism made them the effective stalwarts of Lando’s crew, thus making the events of this issue that much more surprising.

Furthermore, in only a few pages and a handful of lines of dialogue we learn a great deal more about them: the implication of the nature of their relationship in #1 is clarified here, and the implications of that revelation ramp the stakes way up, making for possibly the most effective plot-twist of the Star Wars comics yet. If you find me frustratingly vague at this point, I apologize, but it’s necessary: I don’t want to give anything away as it’s all worth experiencing yourself. 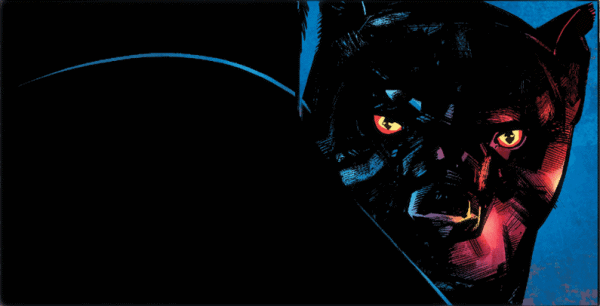 WANT MORE FROM A GALAXY FAR, FAR AWAY? CHECK OUT ALL OF OUR STAR WARS COVERAGE!

The care and pace with which their storyline (the whole issue, really) unfolds is remarkable. Few panels are wasted, each line of dialogue is necessary (even some are left out to allow the reader to fill in the blanks), and the tone is consistent throughout. That tone, by the way, is ominously underscored by the role of the Sith artefacts in this issue’s story. By grounding the events in mythology as old as the Sith, the scope widens and makes the story feel important. None of this would matter, of course, if the creative team wasn’t finally firing on all cylinders. 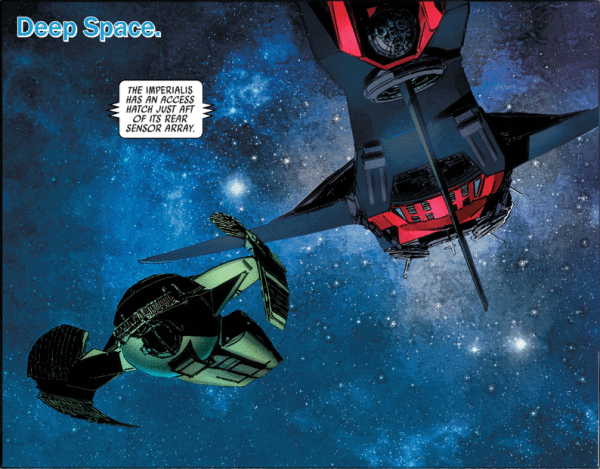 Maybe I’m being unfair–maybe they have been doing so the whole time, but it took the truly engaging story of LANDO #4 for me to realize that. There are so many highlights in this issue that I’m probably better served just pointing out the lowlights–what doesn’t work.

DO YOU PREFER YOUR WARS SECRET INSTEAD OF STAR-Y? CHECK OUT OUR SECRET WARS COVERAGE!

Four issues in (out of five, so, better late than never, I suppose), I realize that it’s not Alex Maleev’s artwork that gives LANDO it’s unique feel, but Paul Mounts’ color. Maleev’s work has been fine–in fact, the backdrops and spaceships and weapons and equipments are all expertly rendered giving the world a weighted, lived-in feel, but the character designs have always left something to be desired. As is the case with the other Star Wars books, the artists could just have their hands tied by having to honor iconic character designs and suffer within that constraint. Because of that (if that’s the reason), it’s hard to get a sense of what Maleev’s style really is (insofar as it is in LANDO). There’s little consistency to how detailed the faces are, nor does there seem to be any rhyme or reason as to when they are or aren’t: Lando’s face could just as easily be detailed in a close-up as it isn’t, or in a wide action-shot as it isn’t. Given perspective or depth, there are of course instances when detail might not be appropriate or necessary or even possible, which is understandable. In the pages of LANDO, however, there is no consistency, thus giving the art a rushed, incomplete feel.

That feeling is only highlighted when you consider the colors. Paul Mounts’ colors are so obviously the source of the book’s look and feel that I want to smack myself for not articulating it earlier. Mounts clearly and effectively reflects (and oftentimes dictates) the tone of each moment, panel to panel, scene to scene. The cool blues of space, the muted purples of the ship’s interior, the sinister reds of the Dark Side; each and more is employed expertly, not overpowering but contributing to the title’s overall dark, underworld feel.  The colors shine (figuratively) in the wordless panels (which are of the utmost importance in this issue) as they build upon and flesh out the foundational skeleton that is Maleev’s work. 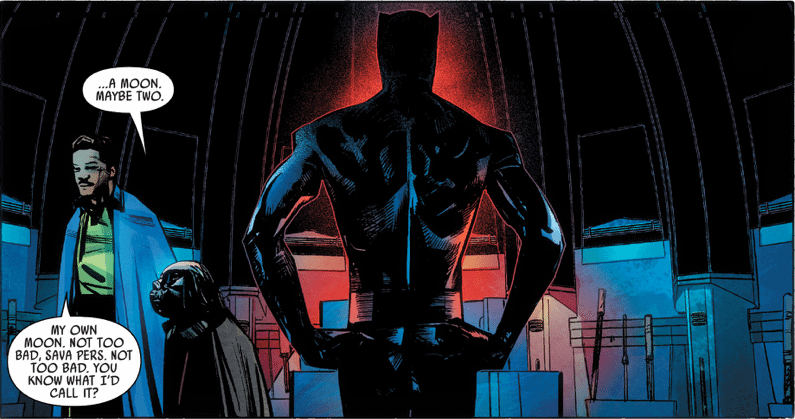 Those wordless panel’s wouldn’t exist if writer Charles Soule wasn’t confident enough to know when to use dialogue and when not to. It may be by virtue of this being the fourth issue that the writing is so economical and effective; without the need for world-building or exposition, each word can be aimed at the meat of the story. The pace does trip up sometimes, though: when panels reveal information through both words and images (or just images) so successfully, three successive panels of just Lando’s face while he talks, for example, stand out as unimaginative. Those moments, however, are few and far between. 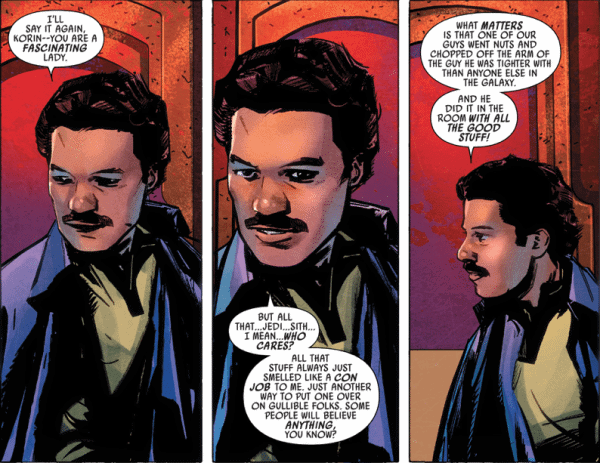 My only other big issue with LANDO #4 is the way it ends. Again, it’s ultimately not a big problem, but, as Pixar Story Artist Emma Coats once explained, “Coincidences to get characters into trouble are great; coincidences to get them out of it are cheating.” LANDO #4 comes dangerously close to cheating at the end, but since the characters are then put into a different kind of trouble, it’s not a total failure.

It is a credit to LANDO #4 that this review can say so little about the plot. I am of the belief that the best stories are immune to spoilers but, sometimes there are exceptions. Given the recap at the beginning of the issue, even newcomers can pick up LANDO #4 and appreciate it–newcomers, that is, that are still “Star Wars” fans. Make no mistake: the story is steeped in “Star Wars” mythology and may go over the heads of outsiders. Still, LANDO #4 is not just a highlight of the series, but of all the “Star Wars” comics.