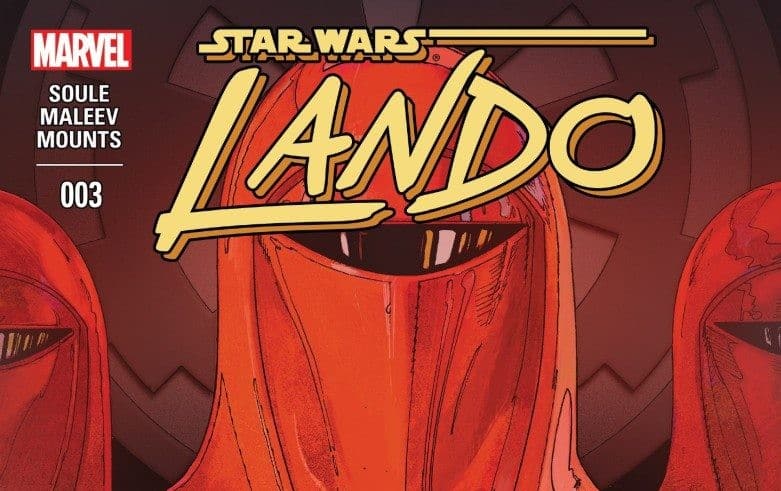 Lando fights off Imperial Guards! …Well, okay, he doesn’t. Expertly trained assassins he hired fight them. He… he runs.

Lando’s own bodyguards hold the Emperor’s Imperial Guards at bay as he and Sava Korin Pers rush Lobot to the ship’s medical bay. With Lobot safely in a bacta tank, Lando and Sava rush back to help in the fight, only to see those same Imperial Guards handily dispatched. With the ship safe, Sava and Lando explore the very cargo hold the Guards were protecting while the Emperor’s hired gun, Chanatha Cha, grows closer with every passing second…

There’s one moment in LANDO #3 that stands out among the rest. It isn’t necessarily a great moment within the comic itself, but within the Star Wars/Marvel comic book universe as a whole. I’ve stated before that the writing in these comics can try to not-so-gracefully shoehorn references to the movies into the dialogue, oftentimes just directly quoting the movies. It’s a nice bit of fan service… when it stays “a bit.” There’s a moment in LANDO #3, however, in which the Emperor’s bounty hunter, Chanath Cha, is pursuing Lando with a droid co-pilot and the droid is about to share with Cha the odds of jumping through hyperspace into a neutron star.

Here we go, I thought. He’s going to say, “Never tell me the odds.”

What he said meant the same thing, and, as such, was a reference to STAR WARS (the movie), but he didn’t directly quote it.

That pleases me greatly.

Now, it’s not great that the opportunity to cringe presented itself, of course, but by not directly quoting the films the way, say, STAR WARS (the comic book) might, LANDO #3 (and therefore Charles Soule, the writer, and the title as a whole) demonstrate a refreshing bit of self-awareness that could go a long way towards making LANDO a stand-out title. It could also not, but the potential is there, and that counts for much more.

Otherwise, the issue proceeds as you might expect it would. Lando takes credit for sheer dumb luck, Sava Korin Pers gripes about it, and, after overcoming one obstacle, Lando blindly walks into another. Soule is trying to employ dramatic tension the same way he did at the end of LANDO #2, but since we know Lando and Lobot will survive this comic while not doing any permanent damage to Emperor Palpatine, the stakes aren’t all that high.

If you’re still reading LANDO by this point, though, I doubt that matters all that much to you. Like I said in my last review, you’re reading this to go along for the ride, and LANDO #3 is actually the best ride of this title so far. The pacing and storytelling tightens, characters beyond Lando get a chance to be engaging and interesting, and there are fascinating bits of world building that give the proceedings some heft. On top of all that, there’s even a vulnerable moment from Lando that gave me a pause I truly appreciated.

It would seem Alex Maleev’s artistic deviations in the last issue were merely necessitated by the plot. The artwork is much more grounded this go-round, connecting nicely to the static, painterly work of LANDO #1. There’s a greater action sequence in this issue (featuring two supremely cool, silent, and ferocious assassins that look like they stepped right off the Wakandan throne and into a galaxy far, far away), and the work actually calls to mind the cinematic, montage-style action of Declan Shalvey’s work on MOON KNIGHT (if you read that, you know that’s a good thing). Pair that with the fact that Paul Mounts’ colors strongly call to mind Matt Hollingsworth’s work on THE WAKE and CHRONONAUTS and you’ve got some of the finest monthly artwork hands-down.

Overall, LANDO #3 does what you would want a third issue to do: it moves your story forward while giving us more of the characters we have, introducing new ones, and deepening and fleshing out the world in which the story takes place. It’s a good read–I just wish it felt more consequential.

DANNY WANTS YOU TO READ MORE OF HIS WRITING! OLD YOU WOULD’VE DONE IT!