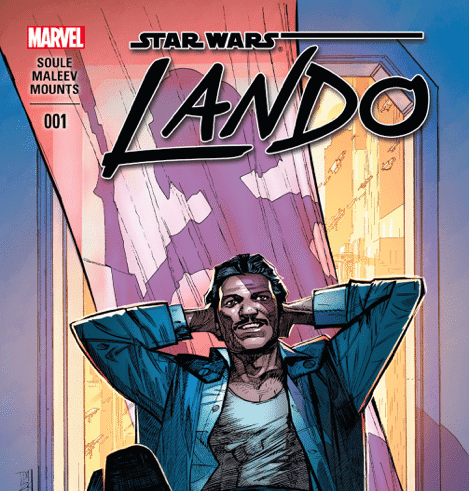 Everyone’s favorite gambler/pirate turned entrepreneur turned resistance fighter is back in his own mini-series! What trouble has he gotten himself into this time?

Expanding upon his appearances in STAR WARS REBELS, LANDO gives us a look at Lando Calrissian in ways only hinted at in the “Star Wars” movies. The issue begins with him seducing an Imperial Moff in a seeming long-con to get a valuable artifact. Said artifact was supposed to square his debt but, as for most scoundrels in the “Star Wars“ universe, the deal goes sour and Lando finds himself needing an even bigger score to save his skin. Oh-so-conveniently, his debtor has just the score in mind, and Lando dives in head first. The heist goes off without a hitch, but the owner of that property is the last person in the galaxy anyone should cross…

LANDO #1 moves fast. Considering it only has five issues to tell its story, LANDO’s speed isn’t surprising, but what is surprising is that it doesn’t feel rushed. Characters come and go, we bounce from place to place practically through hyperspace, and the plot unfolds at a blink-and-you-miss-it pace, but thanks to the art style, everything lands. Alex Meleev’s art is static and reflective (some of Dave McKean’s lighter work comes to mind); you’re practically forced to pause and study each panel as one would a painting in a museum. Because of this, the story never outruns you. The only time the art seems to move is in the issue’s single fight scene–which isn’t a fight scene at all, but a sparring match that goes on in the background. Anyone looking for blaster fights and dog fights will be sorely disappointed. As Lando says in the issue, “Blasters are for suckers. People with no imagination.” 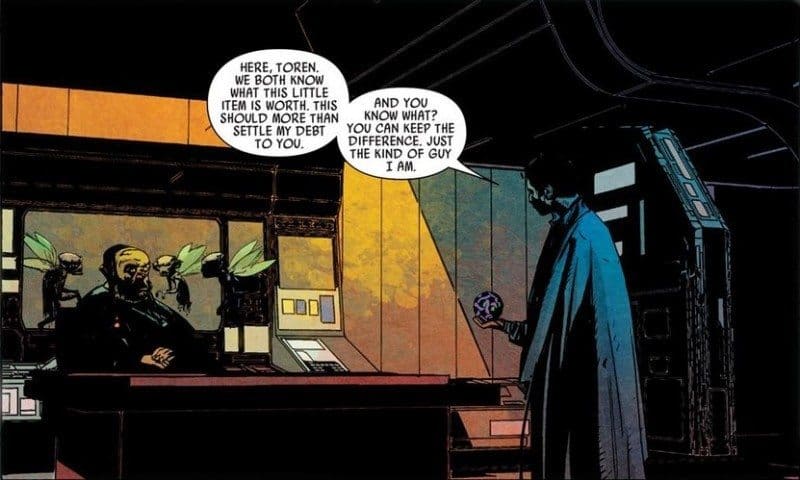 The contrast in tone between the art and story may rub some the wrong way, but it works for me. Lando’s charm pops off the page, especially when each panel seems to be drawn on a black background–an effect that highlights just how seedy and shady Lando’s world is. In fact, the art direction appropriately brings to mind Cowboy Bebop: everything seems dirty and lived in, but there’s a shade of cool to it all you can’t help but be drawn in by.

The reveal at the end of the issue brings to mind my concern with the “Star Wars” comics as a whole: the writers seem to face pressure to make every issue and/or series “count,” so they jack the stakes up when that may not be necessary. Lando is a fun and interesting enough character that just a story about him, no matter how “important” would be fun for “Star Wars“ fans, so making [SPOILER REDACTED] the antagonist in the series seems unnecessary.

On a similar note, as is the case with all the “Star Wars” comics, LANDO isn’t exactly inviting to people new to “Star Wars”. It’s not exactly fan service, but LANDO #1 does assume that you already like him, Lobot (featured here in a much bigger role, thankfully), and scoundrels in general.

I’m obsessively collecting all new-canon “Star Wars“ material, so I purchased LANDO #1, but anyone less obsessive might be able to pass. The art is certainly worth a look, there’s great banter between Lando and Lobot (and everyone else), and it’s fun overall–but that may just be it. It’s only the first issue, so check back next month to see if anything changes, but if you’re still debating, you can go ahead and put LANDO #1 back on the shelf.