LADYCASTLE #1 is one of the amazing female-fueled fantasy comics that BOOM! will bestow upon us over the coming year. Novelist Delilah S. Dawson weaves a gender-swapped Arthurian adventure, featuring a unique and fierce group of characters left in charge of the kingdom after the supposed demise of King Mancastle at the hands of an evil wizard. The story is accompanied by Ashley A. Woods’ incredible artwork, set to make this series an exciting and rewarding read.

Dawson ensures that we not only have a diverse group of characters, but that they are all relevant and have depth. We are first introduced to Aeve, Mancastle’s princess in the tower, awaiting her father to return with a suitor she finds bearable. Dawson depicts Aeve in a full splash, laying in a large purple bed with her long hair sprawled majestically around her. 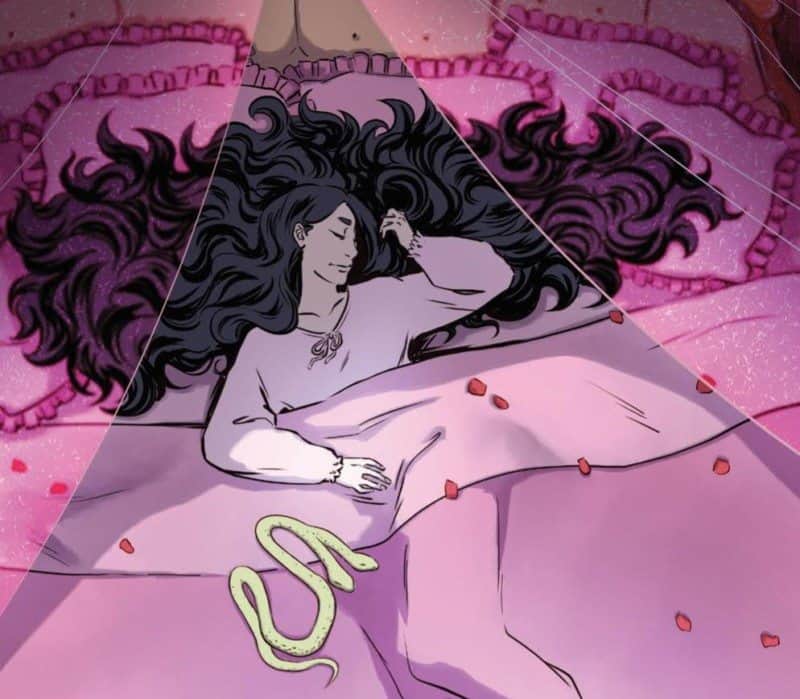 I was excited to find that Aeve was not brooding and helpless, but also not obnoxiously quirky and invincible. Aeve is a little odd, likely from having been in near solitary confinement since the age of 12, but cares for the citizens of her kingdom and shows emotional range. Her introductory sequence shows her cleaning and singing, but also exercising. Aeve is seen to have a dagger on her desk and two-headed pet snake which, beyond being adorable, has been associated with rebirth, power and knowledge across mythologies. Dawson seems to subtly set Aeve up for greatness, without sacrificing personality and depth for the causticness of a hero complex, by giving her the ability to be strong, patient and compassionate.

READ: How Andrew Wheeler and Paulina Ganucheau Created Their Own Badass Princess in ANOTHER CASTLE: GRIMOIRE

I was even more pleased to find out that Merinor, the blacksmith’s wife-turned blacksmith and ruler of Ladycastle, was far more than caretaker and POC side-pal to the main characters. Merinor is a kind but stern voice. She acts as Aeve’s only connection to the rest of the kingdom, sending and delivering letters of care, support and concerns from the other women. Merinor also attempts to act as a guardian to Gwyneff, Aeve’s younger sister, and as a mediator between the siblings, explaining the unfortunate responsibilities that come with being born into royalty. Merinor not only acts as a point of strength for her own family (despite allusions to a tense marriage), but also for the royal siblings and for the population of Ladycastle. 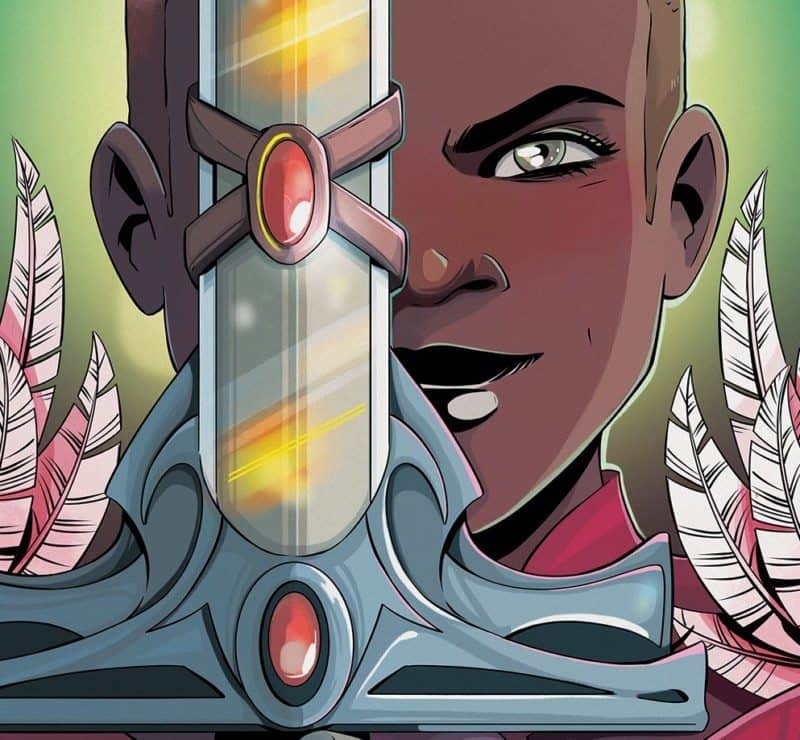 Merinor took over her husband’s forge in his absence and maintained the armory of the kingdom, which later proves incredibly useful. Her composure and intelligence are immediately recognized by the Lady of the Lake. There is definitely something powerful about the panel where Merinor, and not Sir Riddick — the only male left in the kingdom, and a seemingly sinister looking one at that — is handed the Lady’s sword and recognized as the kingdom’s true leader.

Try as Merinor may, Gwyneff, the Arya-esque younger sibling of Aeve, is disgruntled and has a less than amicable relationship with her older sister. The root of tension in their relationship is Gwyneff’s inability to understand the transactional nature of Aeve’s marriage to a stranger, and how she is doomed to the same fate. As the comic progresses, it will be interesting to see how they are forced to interact and develop some sort of relationship as Gwyneff ages alongside her sister and under a strong role model like Merinor. It will also be interesting to see the person Gwyneff grows into and what role she will decide to play. For now, she trains and acts primarily as an observer, as she is still a child. 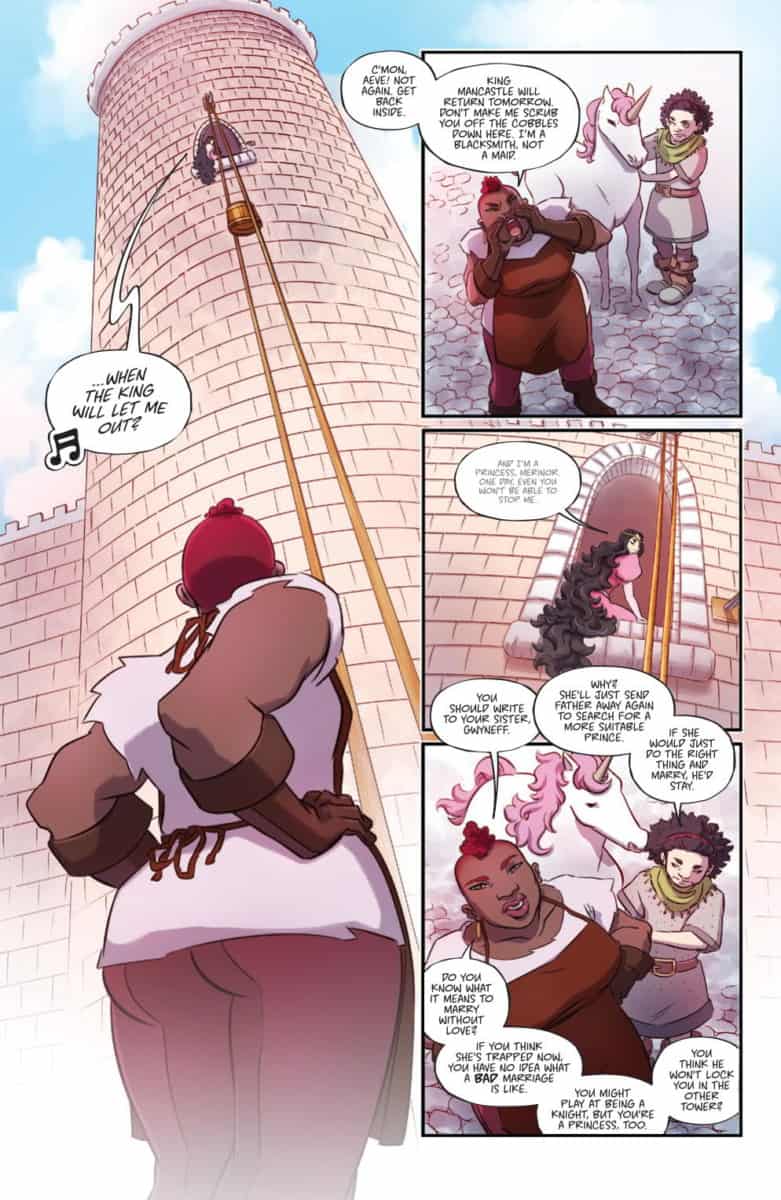 Although Dawson sets up such a wonderful universe for readers to explore, I found the pace of the first issue a too little quick for my liking. I was left wanting a moment to digest all that was happening: Aeve being locked in a tower, Sir Riddick returning with grave news, Merinor becoming the newly appointed ruler, and the women of the town preparing for the waves of cursed creatures. I think that the closing action sequence could have potentially been alluded to and then set in a separate issue, so as to leave the first issue to the establishment of Merinor’s new kingdom and exploring relationships between the characters. Having said that, I understand that the purpose of the first issue of a story like LADYCASTLE is to establish the foundation for the rich and unique characters. It’s meant to excite us into exploring the fantasy-adventure plot over the next couple of issues, even at the small expense of rushing readers a little.

READ: Some of the Best Titles BOOM! Studios Gave Us In 2016!

LADYCASTLE #1’s art is fun, bright and interactive, as to be expected from NIOBE artist, Ashley A. Woods. Woods is able to follow elegance with action, humor, and absurdity (anarchy would have to be my favorite flavor of cake as well) without abrasively interrupting the structure of the story to shift the tone. The characters, including those of lesser importance, are far from the fair female fantasy archetypes. Woods brings to life Dawson’s characters’ array of body types, ethnicities, and phenomenal hair styles in the most wonderful way. Woods’ work in the magic-heavy scenes of LADYCASTLE #1 is also captivating, where the ominous purple clouds behind the wizard, the bright flecks of light mixed with colorful droplets as the Lady of the Lake appears, and the flickering of the fire salamander horde as it approaches the castle all move through the pages, making it impossible for readers to put the issue down. 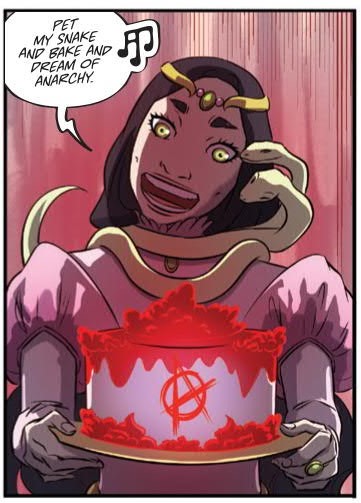 LADYCASTLE #1 is an amazing and promising tale of the strongest kind of magic – female strength and camaraderie. It’s the first of four issues to be released by Dawson and Woods, the next three likely to be as thrilling and beautiful as the first, with many, many more magical twists and turns guaranteed.