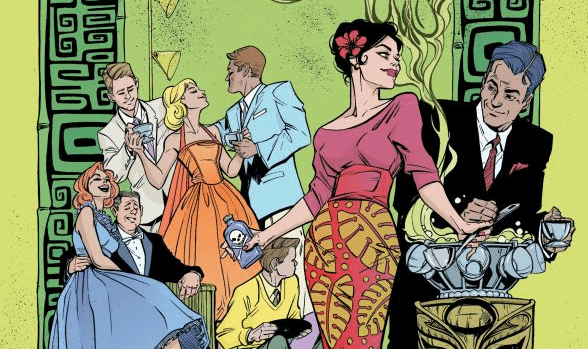 All good things, it seems, must come to an end. Issue #3 marks the halfway point for Lady Killer and goes down a familiar route: eliminating the agent.

The sense of unease from the end of Issue #2 is temporarily pushed to the background as #3 opens with a party at the Schuller house. Josie plays host while everyone celebrates her husband Gene’s birthday; when she heads upstairs to replenish snacks, the lively atmosphere changes as she runs into Mrs. Schuller. The old woman is still suspicious of Josie and says she will reveal the assassin’s true nature to her son.

Meanwhile, the boss Stenholm calls in Peck to dispose of Josie. While the suave-talking agent disagrees at first, he is put to the task when his abilities are questioned as well. It’s only when Josie goes after her next hit—a young boy—that the chase for her begins.

The meeting between Stenholm and Peck is when the story takes a turn for the cliché. The storyline of an agent going rogue (or suspected to, at least) and having an insider in the organization have to track them down and take them out is commonplace, and not very exciting or new. While there was plenty of action in this issue, the way it played out felt safe.

Jones and Rich have created a memorable character, a woman who against sexist circumstances has carved out (potentially quite literally) both a demanding career as well as a family. She’s stylish, intelligent and a bad-ass—it would be a shame to see her reduced to something less.