Whether they’re bouncing heat-vision off the face of the moon, soaring the skies side-by-side, or playing a game of super-fetch across the open fields of Kansas, there’s no bond quite as unbreakable than that of Krypto and Superman. From his days as a pup beside a baby Kal-El to his recent relationship with Clark Kent’s son, Jonathan Kent, Krypto’s companionship throughout the Man of Steel’s biography embodies the magical chemistry between person and animal.

Since his debut in 1955, Krypto’s adventures alongside the Man of Steel have grown into a history of their own. Stretching from his tales with the original Superboy (young Clark Kent) to the newly established Kent family in REBIRTH, Krypto’s longevity in Superman’s life speaks volumes about his importance to the legacy of the Man of Steel.

Krypto’s continual inclusion into some of DC’s major story arcs, including INFINITE CRISIS, SUPERMAN/BATMAN: PUBLIC ENEMIES, SINESTRO CORPS WAR, HUSH, and even Alan Moore’s WHATEVER HAPPENED TO THE MAN OF TOMORROW? is further testament to his value within the comic book community. Having gone paw-to-toe with some of DC’s greatest villains, such as Superboy-Prime, Mongul, and the Eradicator, Krypto has proved to be an equal among his fellow Super Friends. 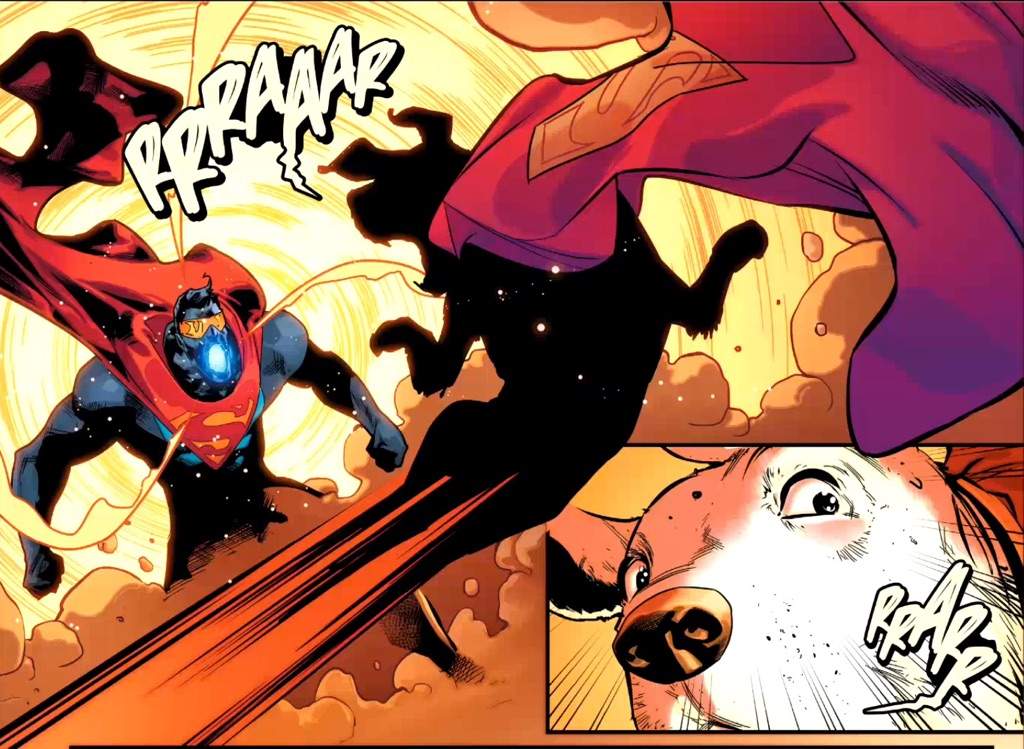 Krypto’s alien origins endowed him with the same extraordinary capabilities as his fellow Kryptonian comrade. Therefore, from the emissions of our yellow sun, Krypto is one of the strongest beings around; even with his power-level proportioned to his canine frame.

Krypto possessed various unique talents throughout his early comic exploits. For instance, much like Superman’s Fortress of Solitude, Krypto, also had a private sanctuary, his own “Doghouse of Solitude;” forged with passing meteor fragments. The white-haired Kryptonian canine spent much of his time traveling through space, even seen leapfrogging over meteoroids. Krypto’s most amazing ability, however, is one long lost in the Silver Age of comics. His most significant skill was his open stream of conscious to audiences. Silver Age Krypto’s thoughts engaged with the readers directly, unlike his modern iterations that remove his voice altogether.

READ: Want to catch up on DC’s new SUPERMAN series? Take a look at our review on the latest issue starring the Man of Steel!

A super-powered alien dog hop-scotching over meteors, and communicating to audiences through thought bubbles isn’t quite suitable for the edgier tone of most comic stories today. Nonetheless, that specific aspect about Krypto created an intimate relationship between fans and his character; allowing readers to perceive him as his own individual, rather than just a pet.

It’s this disconnected stream of perception that contributes to the countless injustices imposed against animals today. Whether it’s the illegal hunting for tiger fur, rhino horns, & elephant tusks, the accumulation of water pollution into marine habitats, the constant neglect of pets that leads to higher stray & euthanasia rates, the unethical practices of puppy mills for business interests, or the continually inhumane procedures used in farms and slaughterhouses; our inability to connect to non-human animals as equal living beings is the cause of their suffering. The root beneath every form of animal abuse lies within our perception of them as significant or not. 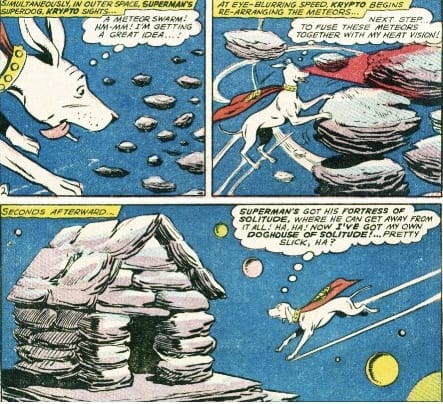 Intriguingly enough, however, is the contradiction between our love and mercilessness towards other animals. A fact clearly evident behind the peculiarities of our societal customs. Taking children to see turkeys at the farm, then teaching how to stuff them for a Thanksgiving dinner. Adopting a pet rabbit for the family, and wearing it on a coat for fashion. Even as a prideful hunting country, we place non-human animals at the heart of our children’s stories. We live in a time with countless animal protection programs, such as the ASPCA, WWF, and the Humane Society; meanwhile, we continue contributing to the extinction and endangerment of countless other species.

These hypocrisies reveal both a level of compassion and callousness towards non-human animal life. Somewhere along the line, we’ve managed to fool ourselves into existing within such a paradox. Impressively, we’ve not only developed an intentional disregard for non-human animal life, but we’ve broadened it through our language.

Colleen Patrick-Goudreau’s ANIMALOGY podcast discusses and analyzes such concepts to extensive depths. Goudreau describes the podcast on her site as “…a podcast about the animal-related words and expressions we use every day and how they reflect and affect our relationship with animals.” Each episode explores a variety of interesting topics, including one where she and a guest elaborate on words that objectify and diminish animals within our language. Examples include how we refer to the flesh of birds as “poultry,” pigs as “pork,” and cow, steer, & bulls  as “beef.”

Though ideas such as these seem of minimal importance, they’re of great value in awakening our compassion towards non-human animals. Our daily language is a powerful indicator for gauging subconscious thought. Questioning our terminology such as “bitch” and “animal” to degrade others is the first step in understanding our separation from non-human animal compassion.

Regardless of your beliefs about the circle of life, it’s certain that animals don’t receive the respect they deserve. Could our depreciation for animals correlate with the growing advancements in technology? Has technological convenience distanced us from our connection to other animals? It’s gotten to a point where shopping for meat is much like shopping for clothes; where the word “chicken” prompts an image of food on instinct. Yet, it wasn’t always like this.

READ: Discover more about undocumented immigration and its relation to the popular Man of Steel!

Perhaps, we can look to other cultures for progressive solutions. In studying the heart of more indigenously-rooted cultures, like many Native American communities, a high regard for non-human animals can be found. Contrary to popular, misconceived beliefs, most Native American communities live modernly; proving a culture can maintain an appreciation for other species within a contemporary society.

Cultures that show higher respect for non-human animal life recognize the relevance they have on the environment and people altogether. Whether it’s providing clothes for warmth, energy as food, or pollinating and fertilizing plant-life, everything intertwines. The beneficial cycle between plants and animals is forever revolving.

Thus, behind the same admiration shown for Krypto in the world of comics, people should seek to grasp the significance of our non-human animal companions. As beloved as Krypto is in his world of fantasy, he’s a symbol of the true power and influence all non-human beings retain. Outside the world of fiction, non-human animals might not possess heat-vision, super-speed, or flight, however, they do acquire extraordinary abilities that, like heroes, contribute to our protection and well-being. 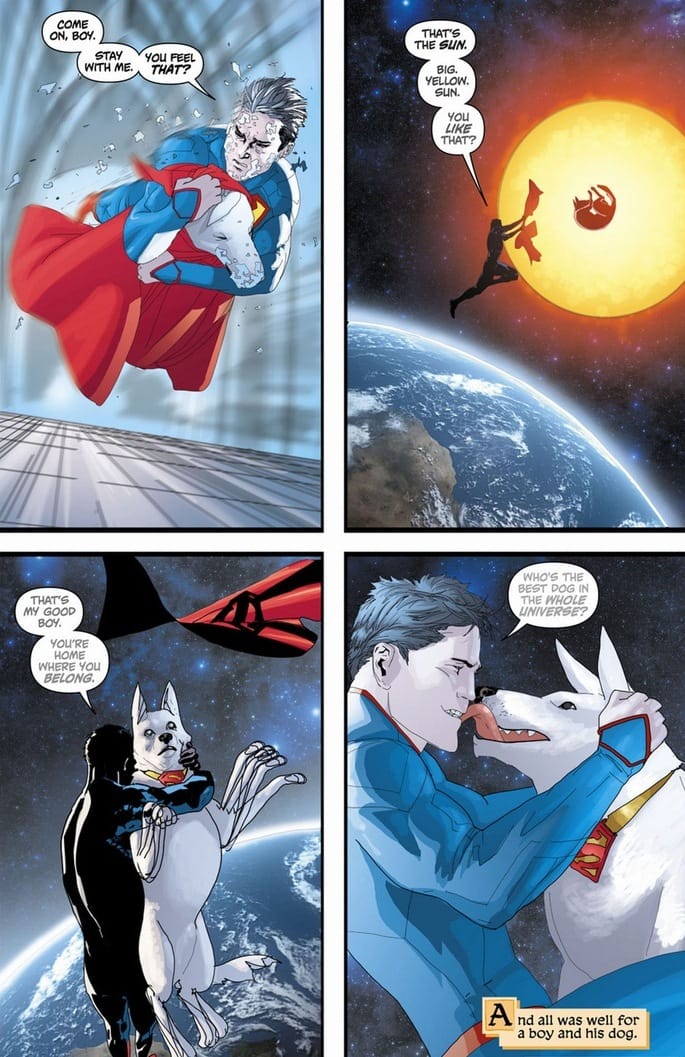 Hopefully, with a growing progressive mindset, and further insight into our language & culture, we’ll develop the same indestructible bond forged between a young Kansas boy and his canine companion for all non-human animals.

Dedication to my Personal Krypto 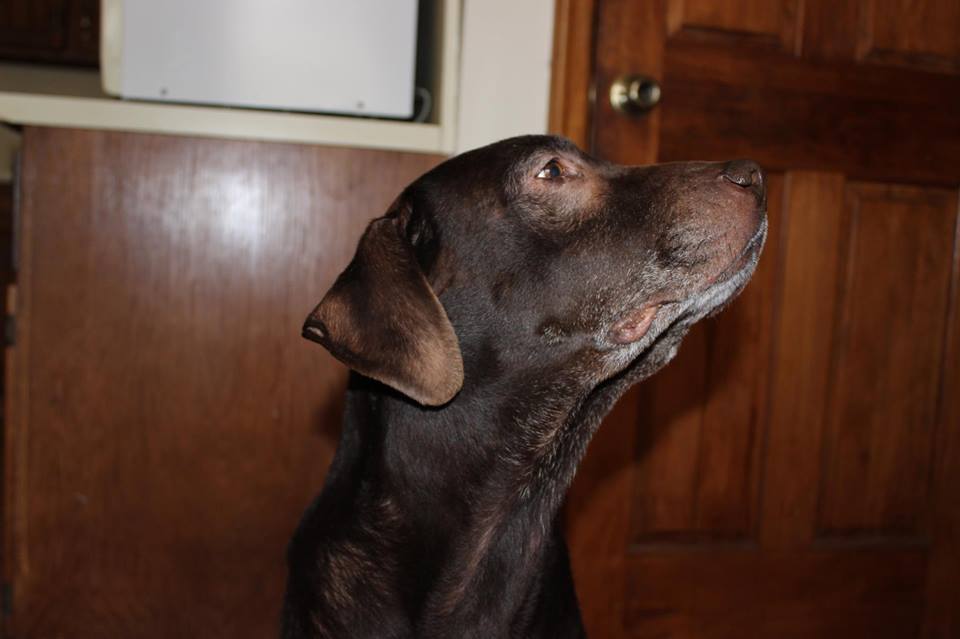 Paris, thanks for filling my years with remarkable and extraordinary adventures. It has been a super, and incredible, journey!