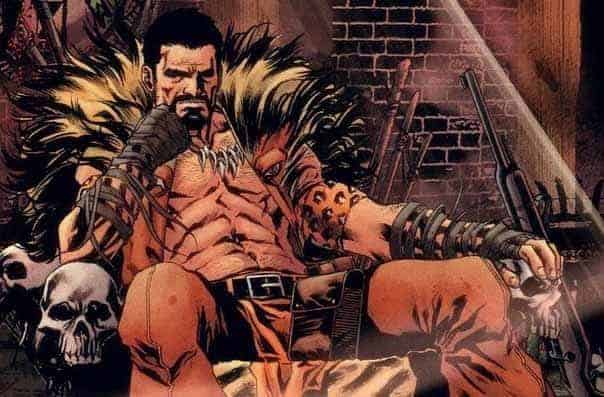 Kill him off. That’s the one-size-fits-all solution for someone that has grown static in the world of comics (and on a much much darker note, life). It happened to Superman, Bucky, Green Goblin, and several others I could look up on Wikipedia if I had the effort. Once the fruit has been squeezed dry the only thing left is to chuck the remains in the blender to extract one last sweet taste.

Marvel Comics came to this conclusion with their squeezed fruit Sergei Kravenoff, aka Kraven the Hunter. When Marvel debuted the muscle-bound Kraven in 1964 they provided the villain with some killer abs but left him pretty flabby in the character department. His stories started off exciting but the routinely disappointed due to his lack of ever considering Spider-man a legitimate threat. Even after being defeated for the hundredth time it never occurs to Kraven that maybe Marvel’s flagship hero shouldn’t be underestimated. The problem wasn’t that Kraven was losing, it was that he wasn’t learning. His inability to change trapped him into becoming nothing more than a well played out gimmick. A big game hunter tracking his prey in the city can only be interesting for so long before it becomes laughably silly (See Predator 2). Kraven became known as an unwieldy cliché of a villain that many writers stayed far away from when constructing a serious story.

And then in 1987 Kraven’s Last Hunt happened, which featured a very different man in the role of Kraven the Hunter. Unlike before, this was a man who respected his enemy to the point of colossal insecurity. A man who hunted not for the thrill but to appease the nightmares that caused him to wake in screaming terror. A man who reflected the victimized side of petty criminals when taunting vigilantes like Spider-man push him further into the world of crime. Finally, after over twenty years of clowning around Kraven was an interesting villain instead of an overconfident meathead who shot ray guns out of his nipples 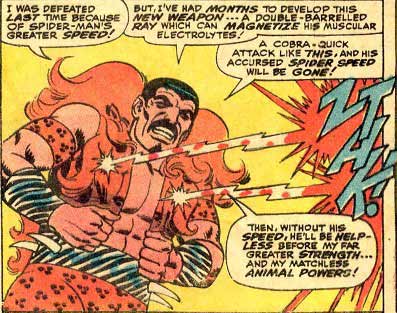 And that brilliant character breakthrough was just in time for him to die. But Kraven would sacrifice himself for a good cause. The Last Hunt would become the most critically acclaimed Spider-man story of the 80’s and still find its way on virtually every top ten list of he all time best Spider-man stories. Even today the illustrations, page layout, and themes bring chills to the senses. But beneath all the gritty style is a shockingly poignant commentary of how ego was the defining aspect for villains of the era. For all the grand boasting in the 60’s and 70’s Kraven did about being “the ultimate hunter”, his greatest triumph was when he was at his most humble and respectful to his enemy. The main story isn’t Kraven’s defeat of Spider-man or his subsequent (spoiler alert) suicide but rather his acceptance of his impotence as a villain and the determination to become the ultimate adversary he has to be. While at face value that may sound like a positive trait, Kraven’s tortured belief in it leads to some psychotic behavior including, but not limitied to, covering himself in thousands of spiders in an attempt to conquer his fears. Decades of being the joke of the Spider-man villains deformed the once proud hunter into a feral creature. 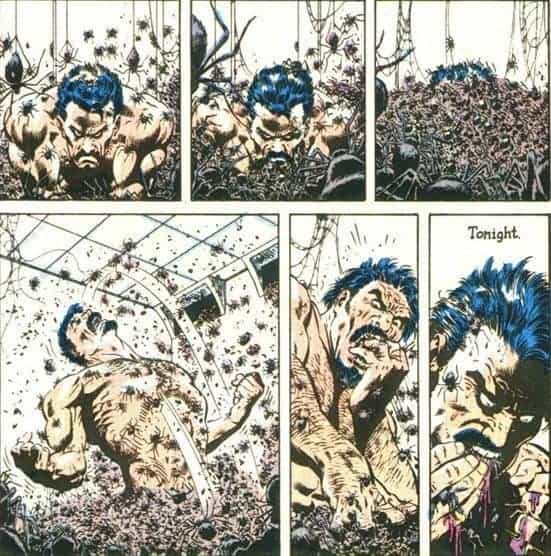 Kraven’s first act in the comic is the killing of Spider-man. This act is shockingly downplayed when compared to the buildup right before it. After pages and pages of Kraven preparing for the fight of his life the tussle with the wall crawler takes only a handful of panels. As soon as Spidey is wrapped up in the net Kraven shoots him in the face. No monologues. No taunts. No added scuffle for the sake of a cool action scene. Kraven wastes no time in making the kill (Although “kill” may be to presumptive a word, but we’ll get to that later). Suffice to say, by having so quick and anticlimactic of a fight, the writer’s perfectly expressed how deadlier this new Kraven was. No other villain at the time would sacrifice a monologue for the sudden kill. It just wasn’t done. The reader’s disbelief is relayed though Spider-man’s interrupted final thought: 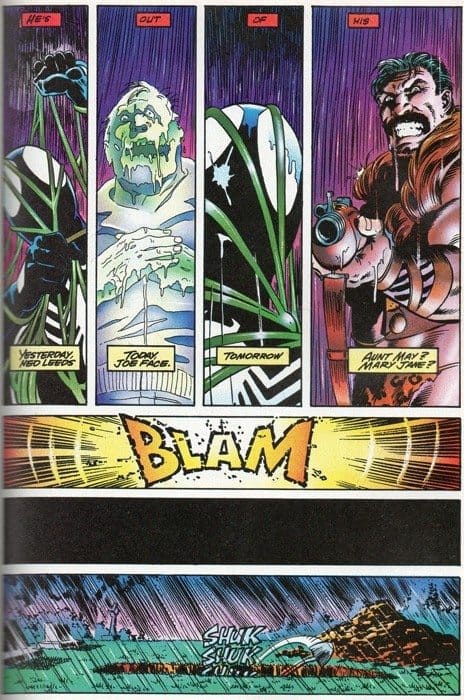 He was obviously about to say “He’s Out of His Element, Donny”

With the Spider crushed the next step on Kraven’s elaborate checklist is the wearing of the slain beast’s skin. In this case that’s Spiderman’s costume so Kraven dons the black outfit and easily incapacitates two muggers. While one could take this as a taunt to his opponent that he is better than the defeated, the aforementioned spider-eating scene suggests something far more interesting. Throughout all of the battles between him and the wall-crawler only taunts have been thrown at Kraven (mostly at the cost to that fantastic loincloth). Actually, Spider-man seems to take great pleasure in taunting all of his villains, transforming them into a running joke while driving villains like Kraven mad. Yet after finally having just defeated his greatest enemy does Kraven simply taunt the Spiderman by parading his corpse around the city? Does cut off his head an stick it over the fireplace along with his other kills? No. He does what Spider-man has refused to do far too many times: He tries to understand his enemy. 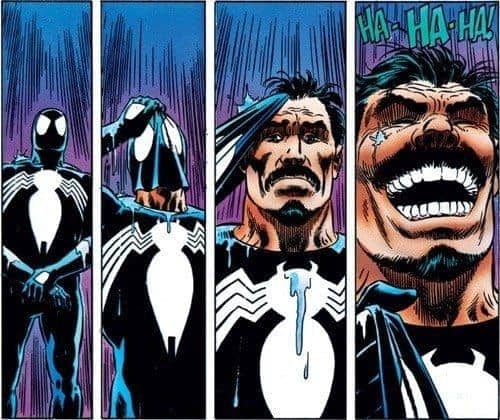 It’s at this point we get to the most interesting wrench in the story: Vermin, a half-rat half-human creature living in the sewers (presumably mad because he has no giant turtles to teach Martial Arts to). As many before me have pointed out, Vermin could have been completely cut with little or no effect to the direct plot. While true, such an edit would rob Kraven of a dark mirror to remind him of the way society once viewed him: A crawling, animalistic failure of a villain with no dignity whatsoever. When Kraven tussles with Vermin, he’s tussling with the man he’s ashamed he once was. When he conquers Vermin and brings the rat-man to a submissive state, Kraven conquers his past embarrassments. Later on when Spider-Man awakens from his catatonic state (surprise) Kraven doesn’t fight back. That part of the battle is over for the hunter. Instead, he pits Spider-man against Vermin, who holds no fear or respect towards Spider-man in the same way 60’s era Kraven held no fear or respect. While he witnesses Spider-man fight his older self, Kraven silently eggs on “Hurt Him, Vermin. And in hurting him, in defeating him, you’ll make him see.” As the fight nears its end Kraven intervenes, saving Spider-man’s life and scaring away Vermin. He guides Spider-man to safety while making a great realization about his enemy. 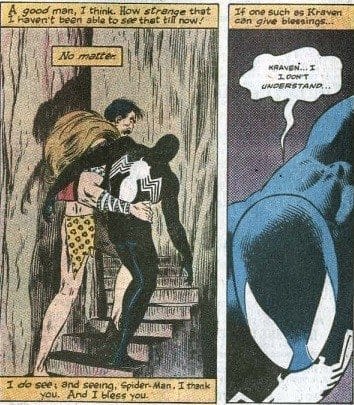 This is a pretty damn awesome scene. No witty Caption here.

And then we come to the final part of Kraven’s plan: His own death. It’s a tasteful and fittingly subtle presentation of something that could be predicted by the title of the story, but the most discussion worthy moment of the comic has nothing to with Kraven inevitably killing himself but refusing to kill. Why spare Spider-man? After all the pain he has caused to Kraven, why let him live and leave the hunt unfinished? There are a few theories that have floated around, but my favorite speaks to the above panel. Decades of embarrassing failures have made Kraven understand that his enemy is more than something that needs to be killed, but rather “a good man” who can be used to carry on Kraven’s legacy and that is the realization that causes his mercy. If he kills Spider-man today he would be hated for a few moments before swiftly being forgotten when another hero takes Spider-man’s place. But by being merciful, Spider-Man’s life becomes a gift Kraven bestows upon the world. Through staying his hand, Kraven claim every incredible adventure and every life Spider-man saves from this day forward. After proving he was physically superior by subduing his foe, morally superior by letting his opponent live, intelligently superior by predicting both Spider-man and Vermin’s actions, and psychologically superior by pitting the two together, Kraven no longer needs to prove his superiority. Killing Spider-man now would be redundant in so many ways. Knowing this Kraven heads to his long awaited sleep knowing he will forever be respected as the man who defeated Spider-man and loved as the one who allowed all of his Amazing adventures to happen.

…At least until they would ruin just about everything by bringing Kraven back to life. On the other hand, I suppose we can blame Kraven for Ben Reilly, One More Day, the Green Goblin getting it on with Gwen Stacy, and the worst thing in the history of theatre. 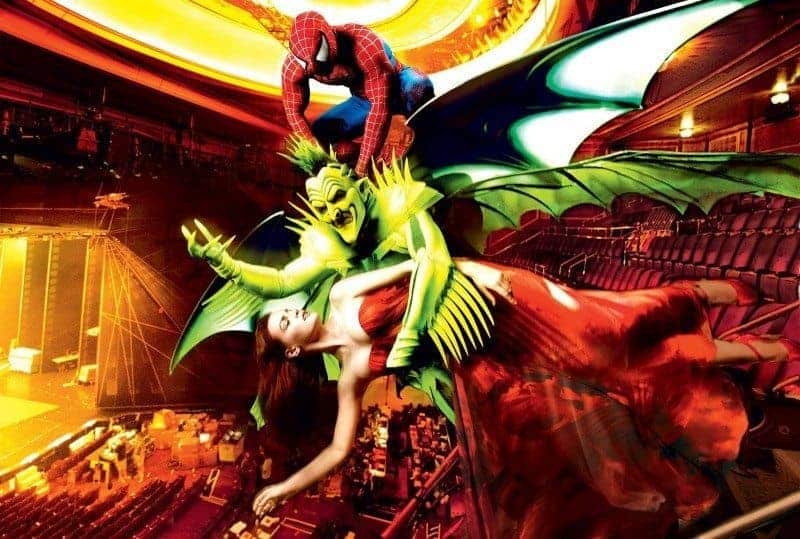 Courtesy of The Greatest Spider-man Comic Ever