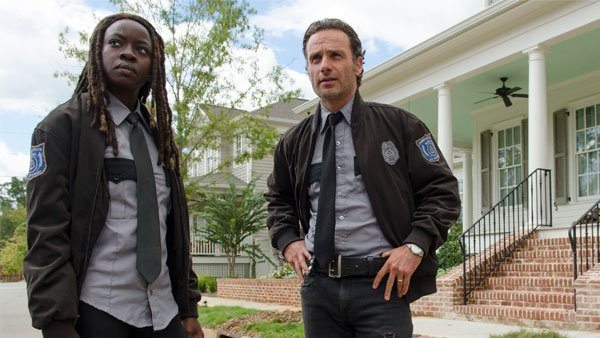 Okay, to cover my due diligence here – let’s get right into the recap:

Nothing says ‘caged animals’ like the awkward display presented at the ‘Let’s Pretend This Isn’t the Apocalypse’ cocktail hour held in the heart of Alexandra, last night. Our characters are attempting to acclimate to what may very well be the closest thing to real civilization since the series’ inception – and in doing so are forced to ask themselves how much they’re willing to commit to their new lives, and new identities (be those identities legitimate, or mere facades). We witness some key moments from the comic brought to life – the most direct being Michonne hanging up her signature Katana. Lastly, we continued tailing a possible new threat, the mysterious “Wolves” (known by leaving their calling card via carving W’s into the heads of walkers – a prominent element of several of the most recent episodes).

Oh, also, we saw yet ANOTHER horse torn to shreds by walkers. This one named Buttons, actually – a horse lifted straight from the page. Because, you know, we were long overdue for a good horse-butchering.

Despite our characters settling in to a cushier lifestyle within the walls of Alexandria, there certainly was plenty of character development going on in “Forget” – some very strong arcs are being presented, some not so much.

Let’s lead with the strong arcs – which easily has Michonne bringing up the front. Last night Abraham essentially raised the point to Michonne that she has yet to really illustrate how she’s committing to the community for which she pushed so hardly to relocate the group. Not that her awkward rent-a-cop outfit game isn’t on point, but she really needs to show that she’s embracing a new lifestyle, and a new identity. In one of the most iconic moments in the comic brought to life – Michonne hangs up her Katana over her mantle. A grizzly reminder of who she became when she stepped out to face the living dead, and who she’s choosing to leave behind. This was honestly a moment I’ve been waiting on for a while now, and I must say – it was beautifully handled.

Speaking of strong character commitment – I’m officially going to start calling Carol “Scarol” instead. Another thing, I’m beginning to learn that Carol in NO WAY should ever be involved with children. She’s either losing them, shooting them, or threatening the SHIT out of them.

In all seriousness – Carol has always been a shining example of how FAR one of heroes is willing to get to the edge, and man does she shine HARD. We’re all aware at this point of Carol’s angle – play the modest housewife role and get the skinny on what’s really going on in town before the other shoe drops. Upon breaking into Alexandria’s armory and stealing back several of Team Grimes’ guns – she’s caught by a little boy who she then SCARES BASICALLY TO DEATH by threatening to kidnap him, and feed him to the walkers. I’m willing to bet that the little tike keeps his trap shut, and that no one will be any the wiser. After all, as Carol aptly claims – her greatest strength is her ability to be invisible. We can only hope that Carol’s darkest (and greatest) strength might actually save the asses of our favorite survivors, as opposed to stirring the pot.

Where Michonne and Carol have really had some opportunities to grow, I’m seeing some weaker development with Sasha – whose struggle to accept her situation in Alexandria took up a significant portion of last night’s episode. Sure, she’s reacting to events within their direct context (grieving over Tyreese and Bob, freaking out at the party because the community is acting as if there totally aren’t zombies strutting their stuff all over the planet ) but we’re not really diving deeper into WHY her personality is causing her to react in the ways that she does. I feel as if I don’t personally have a solid read on Sasha changing as a person – and thusly, her deciding to go shooting in the woods and to wait for the walkers to come for her doesn’t carry much weight, unfortunately. Integral parts of her character makeup just feel… underdeveloped.

This all brings me to Daryl’s interactions with Aaron. An odd couple who seem to really understand each other – both are outsiders, yet Daryl is having an extremely tough time accepting the lifestyle of the Alexandrians and his role in the community. When Aaron asks for his help in taming a wild horse, Daryl agrees. Much to the chagrin of the viewing audience, however, they end up spooking the horse into a position in which it gets cornered by walkers, and eaten alive.

I must admit, I’m having a tough time deciphering what this sequence really means – because it can’t JUST be that we needed to see another horse get eaten (seriously, not cool Greg Nicotero). To me it means either one of two things… One: that Daryl needs to accept the community and their help to build a society, lest he end up with the same fate as the horse who refused to be tamed. Or… Two: That Alexandria is in fact this wild horse, fine in thriving on its own – but there’s simply no way something so beautiful can exist in this world carefree for very long. That eventually, the outside will come crashing down on Alexandria and its residents.

And here lies the greatest irony of where the show may be heading – sure the zombies on the outside are a threat, and sure we’re getting hints at a mysterious and possibly dangerous group called the “Wolves” … But what if our own group of survivors turns out to be the greatest threat within the walls of Alexandria? We’re seeing shades of this here and there… Carol stealing guns and making us piss our pants, Daryl’s horse whispering, Sasha’s freak out at the party and seemingly unbalanced zombie PTSD, and let’s not forget that AWKWARD kiss between Rick and Jessie – a married woman. Team Grimes was brought to Alexandria to help them survive… and yet I get the strange feeling they’re inadvertently pointing the community in the exact opposite direction.

As the final scene of “Forget” appropriately displays – in which Rick Grimes places his hand gingerly on the walls of Alexandria but mere feet from a clamoring walker – walkers simply aren’t the biggest threat at this point. There are far more complex threats bubbling to the surface, both outside of and within our own heroes.

This is The Walking Dead, after all. Welcome to the quiet before the storm, my friends…

Comment Below! Do you think the ‘Wolves’ are an alternate TV universe name for Negan’s ‘Saviors’ , or a new threat entirely?