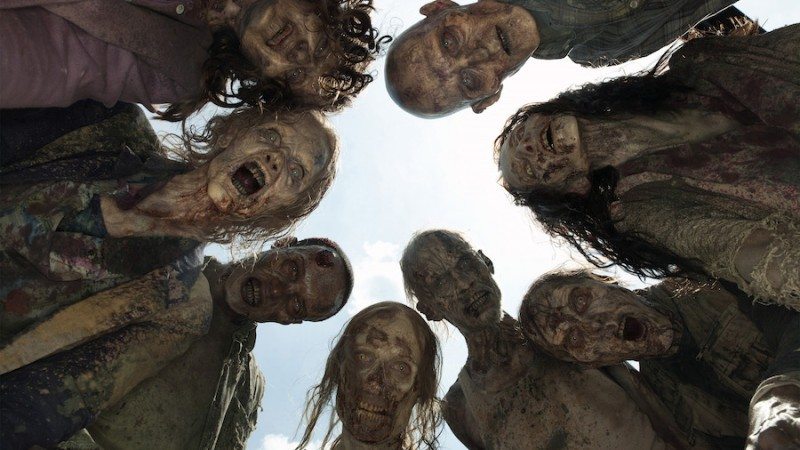 “Do you realize who you’re talking to?” – Rick

We’re back ladies and gents, with THE WALKING DEAD Season Six Premiere!

Before I get into my review, I just want to say – thanks for sticking with us! This will be yet another fine season, I’ll bet, with plenty of chances to make corny jokes and post silly pictures for you all to enjoy. Again, both ComicsVerse and myself appreciate you being around!

Anyway, I’d be remiss if I didn’t dole out an elevator version of how Season 5 ended – so here we go;

Traveling back in time – last season ended with Grimes & Co. (that should be the name of a folk band, shouldn’t it?) making a BIG statement about how the new world order is going to operate in Alexandria. Stone Cold Rick is here, and that cushy lifestyle replete with guarded ignorance they’d built for themselves? Sorry Alexandrians – not going to cut it. Not when the monsters are both outside and INSIDE the gates of the would-be safe haven.

That statement was officially punctuated by Rick putting a bullet in Pete, the abusive husband to Jessie (Rick’s possible new squeeze) and father to Ron, for everyone in town to see. Deanna, Alexandria’s main leader, signed that bill herself in fact.

Unfortunately – Morgan, who has been searching for Rick a long time coming – shows up just in time to see Rick pull the trigger. The implications of that are unclear – how will this effect Morgan’s view of Rick? Is Morgan here to reinvigorate Rick’s moral compass, as Rick attempted to do for him back in season 3 when Morgan was going cuckoo-bananas? Thankfully the coming episodes will tell the tale – as finally, Morgan is here and has legitimate runway to develop his character further.

Also – he’s Donatello from Teenage Mutant Ninja Turtles, now. Not sure if you missed that – but he is.

All of last season’s drama was exacerbated by the arrival of a new and mysterious threat – the Wolves. Some people are theorizing they are TV composites of Negan’s ‘Saviors’ from the comic – others believe they are the TV composite of the Whisperers, again, lifted from the pages of the comic. Either way, both outcomes are scary as shit.

In short – last season was a culminated mess of dilemmas, both morally and faithfully, compounded with major trust issues. Weeeee! Just another sunny day in the zombie apocalypse. 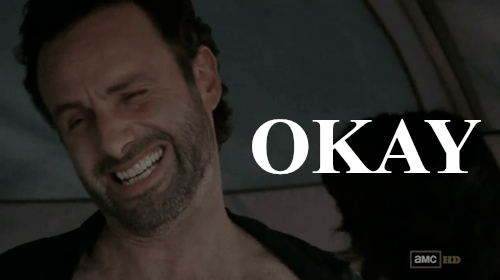 We open on what must be the biggest and baddest episode to date – with more Walkers on screen than we’ve seen yet. It’s an ambitious season opening, to say the least. CG budget be damned.

A question has been percolating for some time now, which is; how on Earth has Alexandria not been taken over by the living dead by this point? Sure, they see their fair share of wall riders… but, no herds? Ever? In our season opening, titled “First Time Again”, this question is unfortunately answered.

As is later revealed in the episode – the town of Alexandria has been freakishly safe for so long, thanks to a singular freak occurrence; Nearly all of the Walkers that ordinarily WOULD be descending on the town have been slowly building up, trapped, inside of a nearby quarry. Slipping and sliding into the quarry, making noise and attracting others, the quarry now houses what must be about 10,000 walkers. Though the quarry provides a dam, of sorts, it is a ticking time bomb at its absolute best. The blockades will inevitably fail – dumping certain death into nearby Alexandria. Team Grimes and all.

I believe I’m not alone in the sentiment that pants were shat. 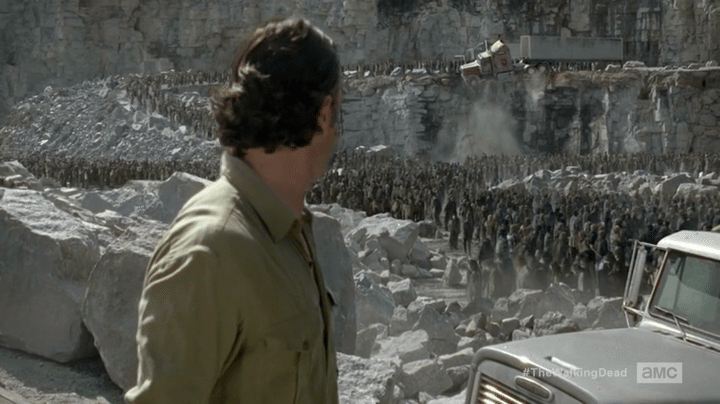 “Not even ashamed to admit it. “

I absolutely loved this revelation. Because why should Murphy’s Law take a day off just because the dead are walking? This was also a really badass way to fill out the ecosystem of the world now that Walkers have been around for so long. Like fish pooling together in a pond, or something. This is just a natural occurrence in this new and fallen environment.

This episode also maintained a much different structure from previous episodes we’ve seen, which I personally felt was quite refreshing. The premiere toggles between present day (in which our characters band together, enacting a plan to divert the massive herd 20 miles away Pied Piper style) and the past – shaded in the same confining tone of black and white that the comic is known for. Within these flash back sequences, we witness this gigantic and insane plan come together with very limited time and resources.

Toggling between past and present isn’t all that “First Time Again” dances between. The premiere episode of this season also walks the line of what Rick has become, which many view as – though critically decisive – abjectly ruthless at times, even to a fault (see: Rick waving a gun at everyone in Alexandria last season, and telling them to fuck off, more or less), and the man Rick was when he ran into Morgan all those moons ago.

CLICK: Get caught up on THE WALKING DEAD comics with our review of issue #145!

This bromance between Morgan and Rick really brings out that through-line; Can Rick maintain his humanity and still be the fearless leader this motley crew so desperately needs? The forecast is promising. When Rick finds Carter (played by Ethan Embry) conspiring to kill him, he spares his life. As Morgan astutely claims – “because that’s the guy you really are”.

I suppose I’d have to cast my opinion here and say… making Rick so dark in the previous season, so cold, was a really bold choice for the writers – despite this also being a dilemma lifted from the source material. It’s a characteristic of Rick’s arc that provides one of the more interesting elements of appreciating Rick as our hero. There are times when you love him, and times where his actions absolutely turn you away. Playing it vague as to which Rick we’re going to be living with for the next couple months is a smart move on the writer’s behalf, but… I certainly hope they commit to one or the other at some point.

But maybe that’s the point? In many ways, Rick isn’t so sure what kind of man and/or leader he is either, perhaps much less than we. He’s confident in his ability to survive, and even his ability to peg idiots who are simply meant to die – as in Carter’s case. Rick calls his death out long before it happens, and then BAM! He’s totally right. Carter screws up, and his face gets eaten. I felt that may have been too vindicating – to be honest. Glenn has effectively turned Nick, who tried to off him last season, into a functional member of the team. This new dynamic between their characters provided a bright spot in the series’ otherwise skeptical view of humanity at large. Rick, on the other hand, believes he has an acute measurement of those who cannot be saved. Again – it’s a clunky duality to his character…

The scenes between Rick and Jessie also illustrate Rick’s clunkiness in a different way. We can clearly see how much Rick desires her… his desire of having a family and the normalcy she represents. He can’t quite express his feelings, however, as we see that he can only speak in “guns”. 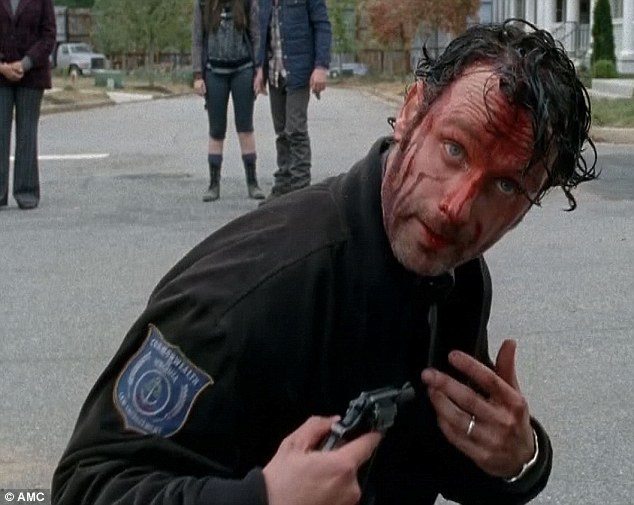 Jessie patiently deals with this awkward approach, telling Rick he needs to be a bit gentler with her son – seeing as, y’know, “ya kinda killed his Dad”. We leave their interaction open ended… which to me says that there still may be a chance for these two to kiss under the bleachers. Is this a good thing? I must admit, I’m not entirely sure…

Back to the bigger issue at hand – herding about 1,000,000 zombies 20 miles away using steel walls as bumpers and Motorcycle Dixon playing the role of the Pied Piper.

Again, the sheer magnitude of the herd in this episode was satisfying and impressive – it was also interesting how calm and collected everything seemed leading up to the plan kicking off. This provided a very stark contrast – scenes in which Morgan holds Judith while Rick and he have a heart to heart almost made me forget that “Oh yeah, a bunch of these characters could totally die soon”.

READ: Our opinion on FEAR THE WALKING DEAD!

With flashbacks cutting the tension of this much larger issue (and not all of them totally necessary, perhaps) – the overall largeness of their task at hand provided some seriously daunting television. The gore was incredible, the makeup superb, and I loved how animalistic the walkers continue to be – with Grimes & Co. using various distraction techniques to move the herd in their desired direction. I also couldn’t help but try to predict exactly WHEN everything would fall apart, which speaks to the nature of this show – we ALL knew it wasn’t going to work out entirely. And when that horn finally went off in the last minutes of the episode – I couldn’t help but blurt out “Oh shit!” and wake up my neighbors.

All told, I’m interested to see where the season goes – as always. Which Rick we will end up with? Will Morgan and Michonne ever settle the energy bar argument? What’s up with The Wolves? Will Nick perform some crazy Hail Mary act and save Glenn or something? Will Sasha and Abraham out-wacko each other? Which little kid will Carol threaten next? And more importantly – how long will Alexandria last, if long at all?

All these questions to be answered, and more! All in Season Six of The Walking Dead! (Now, if you’ll excuse us, we have about a billion walkers coming this way…)

– We totally met Heath! A major character in the comics. Casting Corey Hawkins in that role was a fantastic choice. Dude was Dr. Dre in Straight Outta Compton. Such a badass.

– My prediction is that the horn blower is Ron, getting back at Rick, but part of me thinks it’s someone much, much worse…

– I honestly don’t recall Michonne nabbing one of Morgan’s snacks back in Season 3, but I DO remember her casually munching an apple. I don’t know why, but that scene was so funny to me…

CLICK: Comics! TV Shows! All you need to know about THE WALKING DEAD!
For more from Matt Klein, click here!