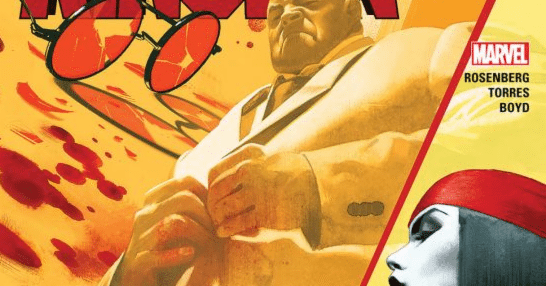 He has twisted the law. He has killed. He may be down, but never count him out.

That’s part of the tagline that officially begins KINGPIN #1, where Wilson Fisk has fallen from the heights of crime and is trying to rebuild himself. It’s a process that will undoubtedly take many twists and turns as the series progresses, but it is off to a solid, if slightly familiar, start.

The issue begins not with Fisk himself, but with Sarah Dewey, a reporter who is also struggling to rebuild her career. She is pulled from covering a bloody boxing match in Hell’s Kitchen to Fisk’s mansion, just as Fisk is finishing his own workout.

READ: How accurate was the early word on KINGPIN?  See our review of the first press release!

Fisk states his position clearly–the rights to his life story have come out, and he wants Dewey to take charge of the project. Dewey is wisely reluctant, but Fisk invites her to a party the next night, even going as far as to send her a pair of dresses to wear. Ben Torres’ art stands out through this entire page, starting with a shadowy neighborhood going to pot as white silhouettes walk through it, while Dewey ends the page looking over the expensive gowns. She does go to the party, where Fisk makes it clear he has thought of her every need, including making sure that sparkling apple juice is available at the bar. Fisk states, “It’s hard to escape these social rituals,” but Dewy is not fully convinced yet. Fisk engages in a more than slightly argumentative discussion with a patron, as Dewey leaves, only to bump into Matt Murdock, who is less than thrilled when he learns her reason for being there. 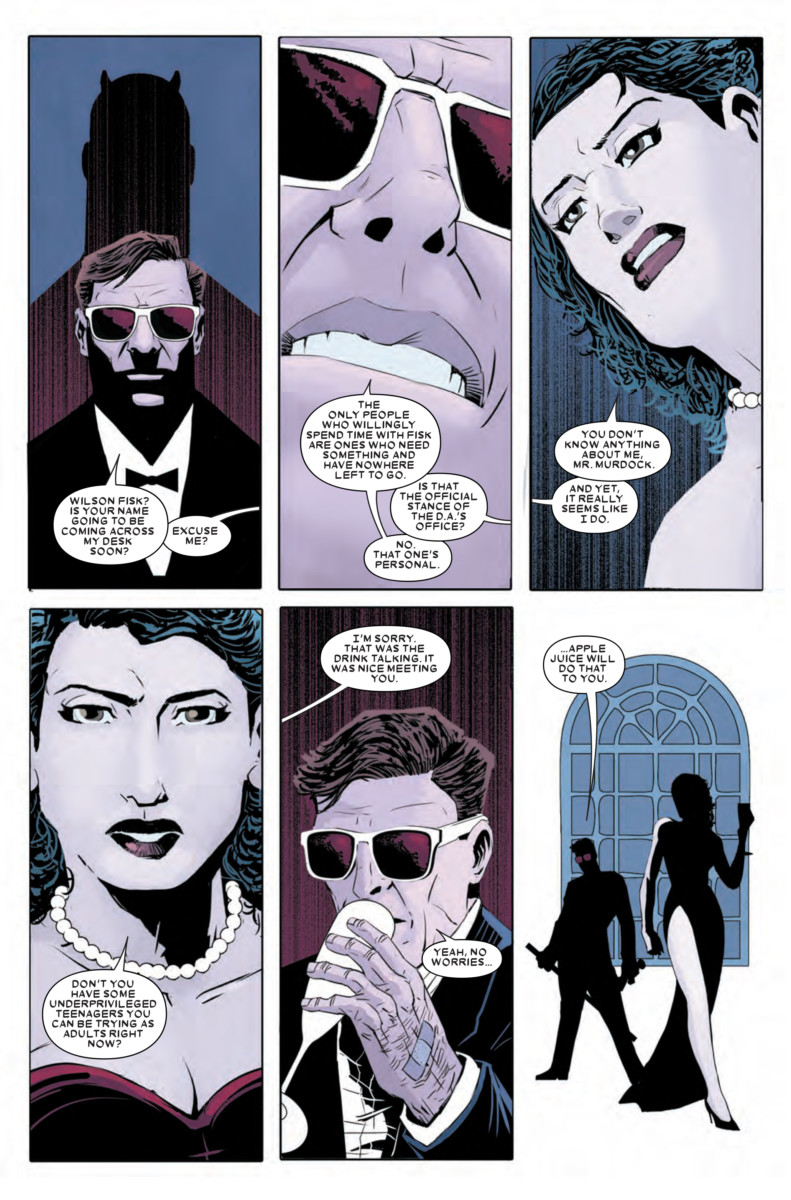 However, the story wisely leaves Murdock as a cameo, as the real focus throughout is Dewey and Fisk, especially after the party, when he arrives at her apartment for late night doughnuts (really). The conversations between the two are revealing: Fisk admits his sordid history and Dewey divulges her own tale of alcohol, divorce, and money woes. The scenes are strong, with Matthew Rosenberg carefully highlighting the similar natures and levels of desperation the two share. While Fisk is in need of a public restoration, he never seems desperate or overly worried. He’s as smooth, confident, and classy as ever. Dewey’s situation is far more dire: she can’t see her son, she’s still recovering from alcoholism, and she’s stuck covering sports when she used to write about politics around the world. It doesn’t reach a level of predator and prey, but those that have followed Kingpin can sense he’s circling. 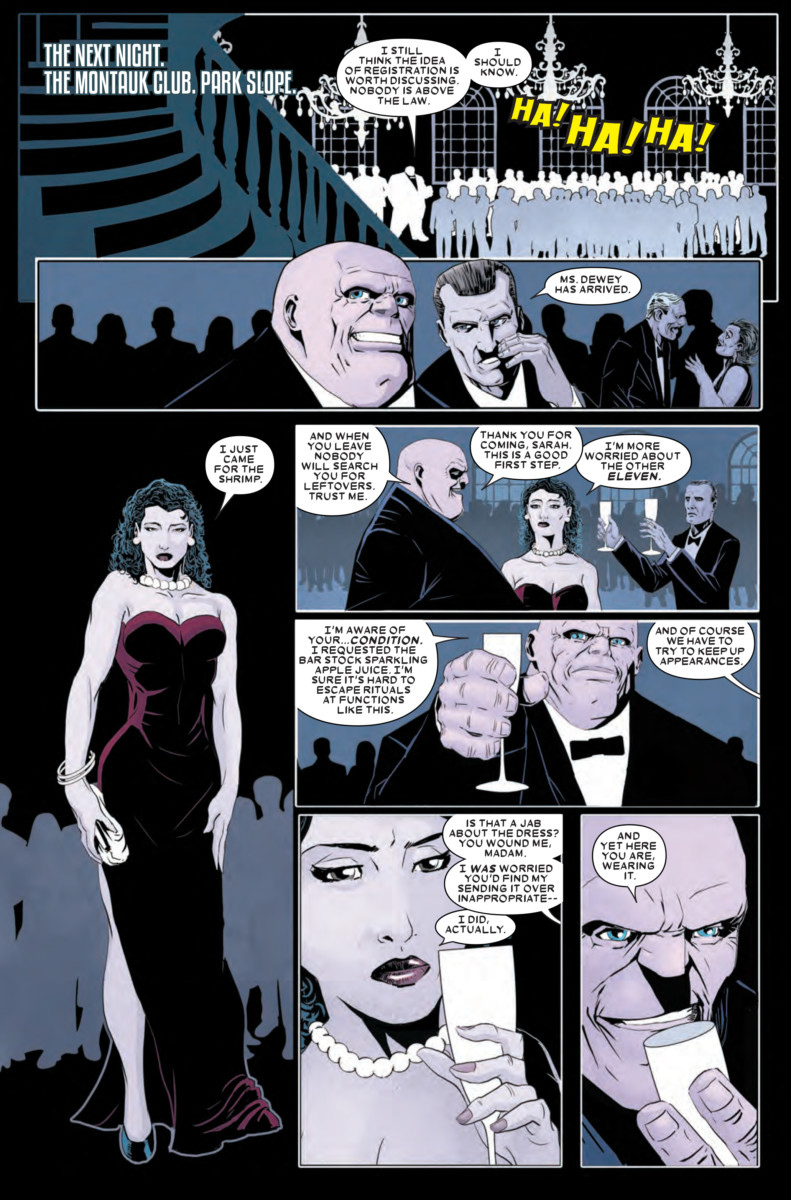 The notes of the story are also familiar to those that followed Netflix’s DAREDEVIL, which also featured a Kingpin trying to do good but never quite leaving the darkness. Watching Fisk and Dewey walk through the park, and discuss their lives, brings to mind Vincent Denofrio courting Vanessa, as does Fisk’s subtle exploits of power and money throughout the issue. While the story doesn’t ring false or as a direct echo of the series, it’s another sign of Marvel blending the two worlds together that’s hard to ignore. It gets even more obvious when Fisk and Dewey are attacked by a mugger, who Fisk seems to placate. What happens to that mugger at the end of the issue sets up plenty of intrigue, but it does bring to mind DAREDEVIL’s first episode and its explosive finale.

READ: How good is DAREDEVIL?  Our thoughts on why it’s still the best of Marvel’s Netflix series!

Regardless, Dewey accepts the biographer job before the end of the issue, cementing the relationship she and Fisk will begin. However, it’s clear that the question of Fisk’s sincerity will never be far from the surface. The true question may be how long Dewey’s desperation will blind her to what’s just under her gaze.

KINGPIN #1 is a strong start, with the usual well-done power moves from a classic Marvel villain. While it may be starting in the shadow of Netflix, there’s plenty of room for it to expand. Dewey is an intriguing view into this supposedly new Kingpin, and it’s clear their mutual needs will keep them together for a while. How long that will be and the cost to them both is a question that should keep readers hooked for many issues to come.