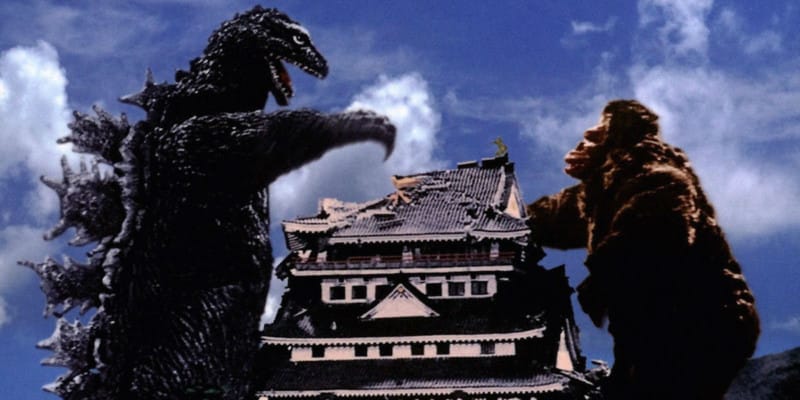 It’s easy to imagine how mind-blowing it must have been in 1933 to see a giant ape, an 8th wonder of the world, towering above mortal men or relentlessly plowing through the streets of New York. To a modern eye, the original KING KONG may seem quaint, but many of its special effects still impress even the most jaded of moviegoers.

In fact, the subtle gestures and facial expressions of the stop-motion puppet Kong or the small details of people fleeing the great ape’s wrath give the special effects of KING KONG more weight and realism than many modern CGI-stuffed action fests. It is for this reason that Kong has withstood the test of time to become an iconic piece of American cinema.

Kong’s popularity led to a handful of sequels and remakes, but few strayed much further than the template of the original. More or less all of the Kong follow-ups stick to the tried and true formula of a crew goes to an island, the crew encounters Kong, Kong becomes enamored with the pretty blonde, Kong wreaks havoc in New York after being taken from the wild.

Even fewer were able to match the innovative special effects of the original film. Willis O’Brien’s painstaking stop-motion animation combined with the rear projection techniques to merge actors seamlessly onto the set with Kong-made movie magic that would influence generations of filmmakers from Ray Harryhausen to Peter Jackson. 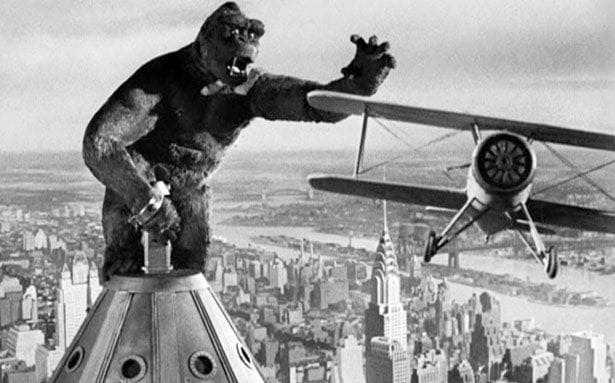 About two decades after the original KING KONG, across the Pacific, Japan’s own giant monster craze was taking off. In 1954, director Ishiro Honda unleashed his parable of radioactive destruction GODZILLA. Much like KING KONG before it, GODZILLA portrays the destructive power of its monster as dangerous and deadly serious. Following GODZILLA, Honda would go on to become a kaiju auter with films like MOTHRA, FRANKENSTEIN CONQUERS THE WORLD, RODAN, and THE WAR OF THE GARGANTUAS, not to mention a whopping seven sequels to GODZILLA wherein Honda created the original cinematic universe as Godzilla squared off against characters like Mothra and Rodan, following their appearances in their solo films.

The ultimate crossover, however, would be in 1962 with the release of KING KONG VS. GODZILLA, where America’s own kaiju would square off with the new King of the Monsters, Godzilla. It’s worth noting who gets top billing in this film and who is portrayed as the hero. KING KONG VS. GODZILLA was only Godzilla’s third cinematic appearance, and it highlights the major difference between these two characters: Kong is a victim of circumstances, while Godzilla is a force of nature. It’s KING KONG VS. GODZILLA and its sequel/spin-off KING KONG ESCAPES that show Kong’s influence on the future of the Kaiju genre in Japan.

“The Most Colossal Conflict the Screen Has Ever Known”

Following the success of the original Godzilla, Toho produced a quick, and less beloved, follow-up entitled GODZILLA RAIDS AGAIN. Following his original solo adventure, this film marks the first time Godzilla faces off with an enemy monster. With that formula in place, Ishiro Honda, director of the first GODZILLA, made his return to the director’s chair to bring the future of Godzilla films to new creative heights. In KING KONG VS. GODZILLA, the plot is driven by the machinations of an ad executive Mr. Tako (Ichiro Arishima), who is desperate to boost his company’s image and wants Kong as a publicity gimmick.

Much like in 1933’s KING KONG, the titular ape finds himself at the mercy of greedy men who are seeking greater fame and fortune. In this film, Mr. Tako fills in the role of the original KONG of Carl Denham (Robert Armstrong), the desperate film director who arranges the voyage to Skull Island. Under the orders of Mr. Tako, Kong is removed from the island just as Godzilla has awoken from his icy slumber. Kong inevitably escapes his captors, leaving the two titans to duke it out for dominance as they make their way through Tokyo. 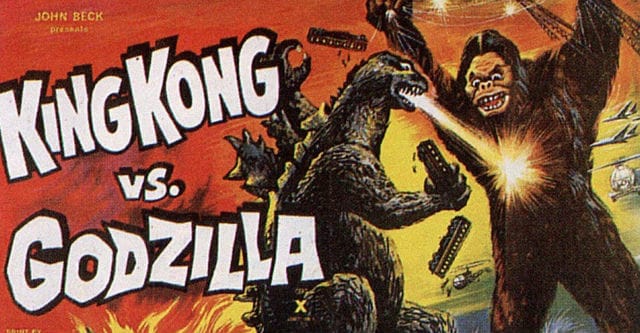 As you may be able to tell by who gets top billing in the film, King Kong is treated as the protagonist rather than the Big G. Mr. Tako repeatedly cheers on Kong during his face-offs with Godzilla and during the final battle, Kong resurfaces and Godzilla has vanished, much to the joy of the citizens of Tokyo. Honda continues the thematic idea of Kong being a victim of circumstance, taken from his homeland and forced into a world he doesn’t understand. In doing so, Kong becomes more sympathetic than Godzilla who maintains his status as a terrifying monster, establishing Kong as the more “heroic” of the two kaiju.  In giving his giant monster movie a “hero” monster and a “villain” monster, Honda reshaped the way his future kaiju films would be plotted. As Den of Geek writer Jim Knipfel wrote of the film:

“…the film also veered away from the almost overwhelming grim intensity of Honda’s 1954 original (which had been tempered considerably by the American distributor)… [it] was a much more lighthearted affair, a live-action cartoon with plenty of humor. It also introduced the era of the kaiju smackdown.”

It was no longer enough for a single monster to ravage a metropolis of helpless civilians, now the kaiju needed a second monster to battle. With this new dynamic came a new way of looking at kaiju morality. It’s hard not to think of Kong’s exploitation by man when looking at this quote from Honda:

“Monsters are tragic beings. They are born too tall, too strong, too heavy, they are not evil by choice. That is their tragedy.”

This tragic monster concept is further reinforced in Honda’s 1967 film KING KONG ESCAPES. This film goes back to basics and reappropriates a lot of classic Kong imagery from the 1933 film, like Kong’s fight with a T-Rex. Kong is also once again given a pretty blonde romantic partner, Lt. Susan Watson (Linda Miller), proving that the Kong films are really just the story of a dude who gets into a series of self-destructive relationships. Honda plays up the empathy with Kong immediately by making Lt. Susan Watson instantly sympathetic with Kong, protecting him from the military agents she is with on the island. Watson shows herself to be far more protective of Kong than any previous female Kong leads, making the giant ape much more endearing to the audience.

CLICK: Like GODZILLA and KING KONG? Then you’ll love the new comic KAIJUMAX! Check out our interview with the creator!

The Kong suit this time around has even been designed with these massive, watery puppy dog eyes. Intentional or not, they turn Kong into a sweet cuddly giant monster rather than the fear-inducing god of his previous appearances. However, the greatest influence taken from this film onto the Godzilla franchise is the appearance of Mechani-Kong, a robotic facsimile who battles King Kong in the film’s finale, predating the first appearance of Mechagodzilla by nearly 10 years. 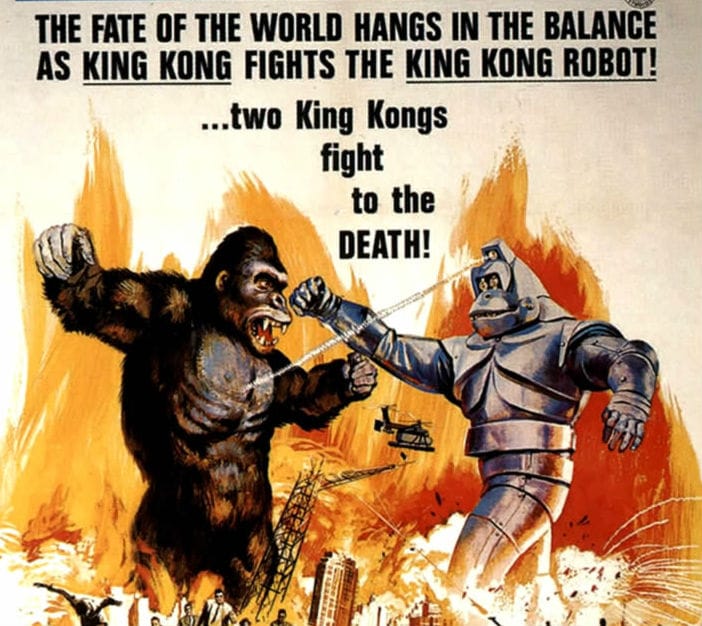 That empathy for the monster has been a key component of King Kong since the character’s creation where Denholm laments after its death “’twas beauty killed the beast.” Kong may not be the character that Honda built his career on, but he likely influenced how Godzilla would be portrayed in later films.

Following KING KONG VS. GODZILLA, Honda would direct GODZILLA VS. MOTHRA, pitting Godzilla once again in an antagonist role to the heroic Mothra. Following that film, Godzilla would begin to make a heel-face turn, to use wrestling terminology, in GHIDORAH, THE THREE HEADED MONSTER. In this film, Godzilla allies himself with his one-time enemies Mothra and Rodan after the three monsters discuss the morality of humanity and their responsibilities in protecting the Earth (no I’m not lying, yes that really happens, yes it’s amazing). It’s from this point forward that Godzilla, for the majority of his films going forward, takes on the role of protagonist in future Godzilla movies.

Undoubtedly, the popularity of Godzilla among children played a role in the way the character was softened, but King Kong’s early films and Honda’s use of the character showed that audiences loved a monster they could root for. While Godzilla may now be considered the King of the Giant Monsters, Kong will always be their grandfather.