In high school, you typically have a pretty good idea of who your crush is outside of school, regardless of how misguided or unrealistic your interest in them might be. Chances are you’ve had several classes with them, your friends know them, and you maybe even grew up with them. College is totally different: your courses are full of complete and total strangers. You know nothing about these people, and there’s a chance that you will never see them again for the rest of your life once the course is over. At some point as an adult, the concept of being infatuated with a stranger completely loses its appeal. When you finally get to know your crush, you usually discover that they’re much less interesting than you originally imagined.

KIM REAPER, a supernatural comedy from Oni Press with story and art by Sarah Graley, pushes the oddity of the college crush to its ridiculous and adorable extreme. In the first issue, college student Becka finally works up the nerve to ask her classmate Kim out for drinks. As she hurries to catch up with her crush, she accidentally follows her into a portal where Becka finds Kim with a scythe about to execute a cat. Apparently, Kim is way more goth than even her appearance let on. Working as a part-time grim reaper, Kim helps animals pass on to the other-side. After Becka’s unexpected arrival at the site of Kim’s latest assignment, things go awry. 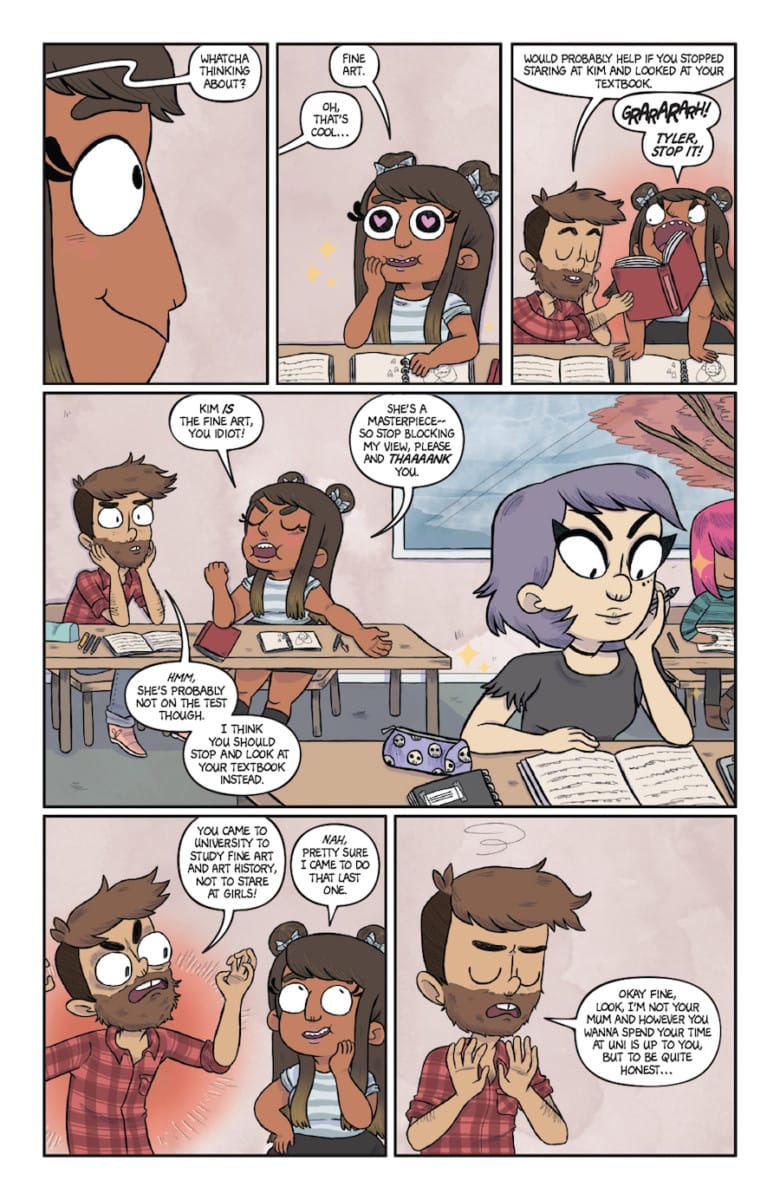 Admittedly, KIM REAPER #1 has a bit of a slow start. Graley takes several pages to establish Becka’s crush on Kim, without really telling us much about Becka or Kim. The little information we are given about Becka and Kim is gleaned from Graley’s character design. We are given a sense of Becka and Kim’s personalities just through the attention paid specifically to the characters’ clothing, makeup, and hair. Becka’s look is simple and neat, and her hair is half-up in buns, tied with bows. This preppy look compliments her perky personality and contrasts Kim’s half-shaved purple hair, heavy eyeliner, and ripped black crop-top. The characters are also super animated; their expressions range from heart eyes when enamored to baring fangs when angry. Graley drives home the overall cuteness of her comic by using pastel pink and purple backgrounds throughout the panels of KIM REAPER #1.

Graley’s art is a treat to look at from start to finish. However, I can’t help but feel she could have used the opening pages of this introductory issue to wow us somehow. She could have used this space more creatively. I would have appreciated getting a deeper sense of who these characters are or even just some really cool visuals. Nevertheless, it does seem like Graley intentionally used the opening scene to establish a major theme within KIM REAPER: the weirdness of college crushes.

Even in the context of KIM REAPER #1, Becka’s crush on Kim is definitely immature. Instead of focusing in class, she is staring longingly at Kim. When her friend Tyler confronts her about this, she tells him that she and Kim are obviously meant to be together and then “schemes” to ask Kim out for drinks with them. This invitation wouldn’t be odd at all, except that we learn Kim has no idea who Becka is. There is a definite silliness to Becka’s infatuation with Kim, someone who doesn’t even know she exists. In context, Becka fawning over Kim is undeniably cute thanks to Graley’s art and dialogue. For example, Becka insists that Kim is “a gothic angel sent from the heavens” as a haloed Kim floats over her head. Still, Becka’s feelings towards Kim are intentionally over the top.

It’s also worth noting the intelligence in the decision to make Kim’s love interest a female. Simply put, Becka’s behavior would be interpreted as a lot creepier by the reader if she had been a male. I can only imagine how differently I would have reacted if a male character had called Kim “a 100% cutie with a booty.” Clearly, Sarah Graley knows who her audience is: queer women. However, Graley does manage to address that Becka ogling Kim isn’t acceptable just because Becka is also a female. When Kim finally recognizes who Becka is, Kim confronts her about her odd behavior in class. I personally did not interpret this as Kim being weirded out that a girl was staring at her longingly. Rather, Kim was weirded out that anyone would be staring at her in that way. There comes a point where this behavior isn’t cute. It’s just weird. 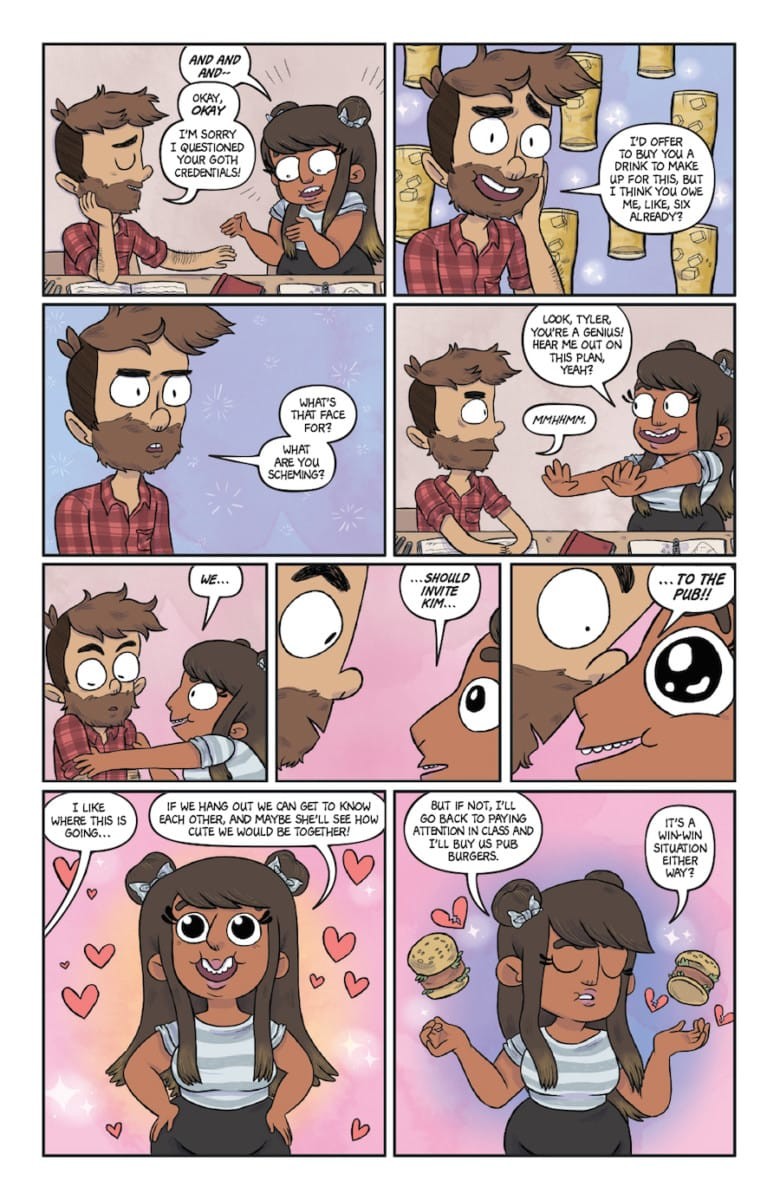 Graley is also using KIM REAPER #1 to challenge gender stereotypes. Although I always appreciate a gay love story, it’s particularly refreshing to see two fairly feminine women cast as love interests. This defies the stereotype that same-sex relationships must have a conventionally masculine and conventionally feminine partner. Kim, goth and reserved, is no less feminine than the outgoing, bubbly Becka. Notably, Becka, a woman of color, represents a group that is typically underrepresented in queer media. Although Graley’s protagonists are both young able-bodied women, she uses these characters to challenge hackneyed representations of queer women.

Furthermore, the antagonist of KIM REAPER #1 is a super buff crazy cat man, not an old crazy cat lady. Although this is definitely intended as a joke, it defies the reader’s and the characters’ expectations. A ripped dude with flowing hair can totally live in a home with dozens of cats who also double as body armor. Although this scene is definitely part of KIM REAPER’s overall sense of quirky humor, it still challenges our perception of masculinity. Hopefully, Graley will continue to use KIM REAPER to challenge our concept of gender roles in subtle, fun and unexpected ways.

Despite its slow start, KIM REAPER #1 has an amazingly cute concept and a ton of potential. Although Kim and Becka are not entirely convincing characters yet, Graley succeeds in making them relatable to anyone who’s ever had a crush or has worked a less than ideal job just to get through college. I had a gay old time reading KIM REAPER #1, even if the first issue did not particularly impress me. Ultimately, the people who will like this comic know who they are. If you’re obsessed with all things spooky, cute, and queer like I am, KIM REAPER is right up your alley.