At the start of May, the Eisner Awards nominations for the best comics of 2017 were announced. Looking at the list, it’s clear that the success of the mainstream LGBT+ movement has reached the world of comics. Among the nominations is LOVE IS LOVE, IDW Publishing and DC Comics’ response to the Orlando Pulse Nightclub Shooting. There’s also UNBEATABLE SQUIRREL GIRL and SAGA, which both have queer side characters. Clearly, this mainly straight and cisgender (non-transgender) industry really wants us to know that it accepts LGBT+ people in its stories. Which is neat.

And then, among the nominations for Best Limited Series, there’s KIM AND KIM, which is a different thing entirely.

What Is KIM AND KIM? 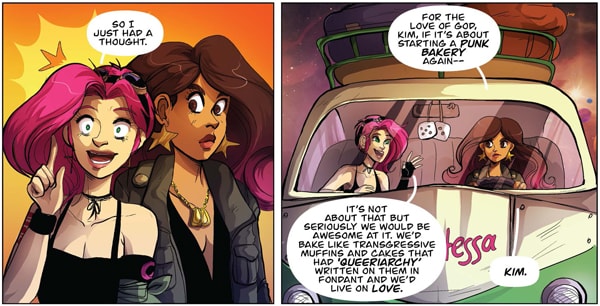 Black Mask’s KIM AND KIM is about two women with the same name who work together as interdimensional bounty hunters. Both Kims are bisexual, and Kim Q. has been out as trans since way before the events of the story. Plus, the creators are super LGBT+ as well. Writer Magdalene Visaggio is a transgender lesbian who created Kim Q. as someone she could aspire to be after her own transition. Plus, artists Eva Cabrera and Claudia Aguirre come up with the gayest wardrobes in the galaxy for these characters. Aguirre regularly makes jokes about crushing on the Kims while coloring them. These three seem to genuinely love how LGBT+ their comic is, in a way that you don’t see very often.

READ: Check out our interview with Magdalene Visaggio at Five Points Festival 2017!

The thing is, the Kims don’t just happen to be LGBT+ the way Koi Boi of SQUIRREL GIRL happens to wear a binder once and never actually says he’s trans. On the other hand, their identities don’t consume them to the point where there’s nothing else about them. Kim Q. daydreams of opening a punk feminist bakery with cupcakes that say “Queeriarchy” on them. Kim D. wears army surplus jackets and aspires to be just like her lesbian aunt. Our two heroines gossip about various hotties of multiple genders — all the while piloting spaceships and fighting giant sandworms. KIM AND KIM is fundamentally a sci-fi buddy comedy, just one where queerness permeates every single panel. 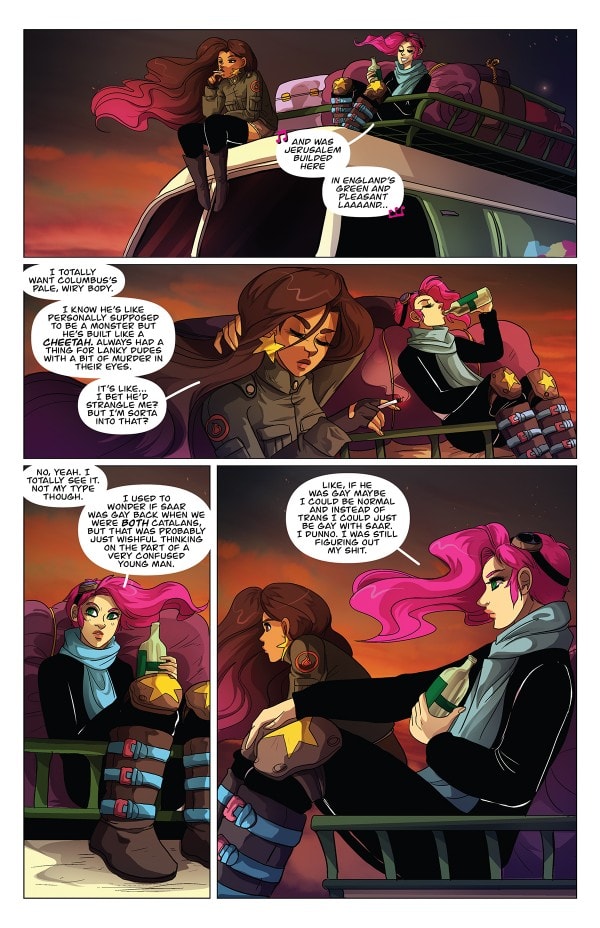 What’s amazing here is that KIM AND KIM is unabashedly queer 100% of the time. And I don’t mean “queer” as synonymous with LGBT+. I’m not talking about the “we’re ordinary people who love marriage and guns, just like you!” kind of queer. Neither is the “it’s not a choice; why would I CHOOSE to be different?” kind of queer present here either. I’m talking “queer” as in “breaking all the rules of gender and goddamn loving it” queer.

The mainstream LGBT+ Movement has worked hard to ease patriarchy’s fears about the threat they pose to the gender binary. The big question is “How can us LGBT+ people be useful to the straight, cisgender, male-dominated society?” This sense of catering to outsiders’ opinions is not at all present in KIM AND KIM.

READ: Our analysis of the ROCKY HORROR remake explains why the mainstream LGBT movement has become so moderate!

Kim Q. may have a father who disapproves of her trans identity, but his opinion is completely irrelevant. Every other character, including his own minions, refer to Kim by the correct name and pronouns. Plus, she doesn’t even talk to him anymore, and a big part of her character arc is getting over her anger at his rejection and learning to live independently. She doesn’t live for him, nor does she live for a cisgender male audience’s consumption. When Kim Q. comes out as trans, it’s in a casual conversation where she explains why pursuing romance with a cis man was unhealthy for her. Kim Q. surrounds herself with women and is just generally about women 100% of the time.

Same with Kim D. She mentions having crushes on dudes, but that’s a seriously small part of her character. In contrast to stereotypes about bisexual women being “lesbians until graduation” who will inevitably choose men, Kim D. is pretty set on her path in life. She’s the responsible one who has proudly taken on the challenge of making a wild female-focused life with Kim Q. work, rather than settling down into the cushy necromancy job her mom wants her to do. The idea that Kim D. would ever return to normalcy is completely against everything that she is.

READ: For more on how bisexuals are also hurt by hetero-patriarchy, check out this analysis of MONSTERPOP!

KIM AND KIM’s refusal to center dominant culture poses a stark contrast from the other queer representation on the Eisner Awards nomination list. For instance, in the anthology LOVE IS LOVE, most of the writers are cisgender, heterosexual men. And while some of them respectively acknowledged their privileged perspective, others were less tactful.

For example, one untitled comic in LOVE IS LOVE focuses on a father making a speech of acceptance at his cisgender son’s wedding to a transgender woman. During this speech, he publicly mentions his daughter-in-law’s former name… at her own wedding. In real life, this is a huge offense. Yet, somehow in this comic, it’s okay because the father is trying to be supportive and it’s just been so hard for him, you know? We never get the bride’s thoughts on the wedding. Ultimately, it’s only her father-in-law’s experience there that matters.

READ: Is V from V FOR VENDETTA trans?

And that’s a longstanding precedent for the way the outside world interacts with LGBT+ people. For instance, take a look at the history around transitioning. 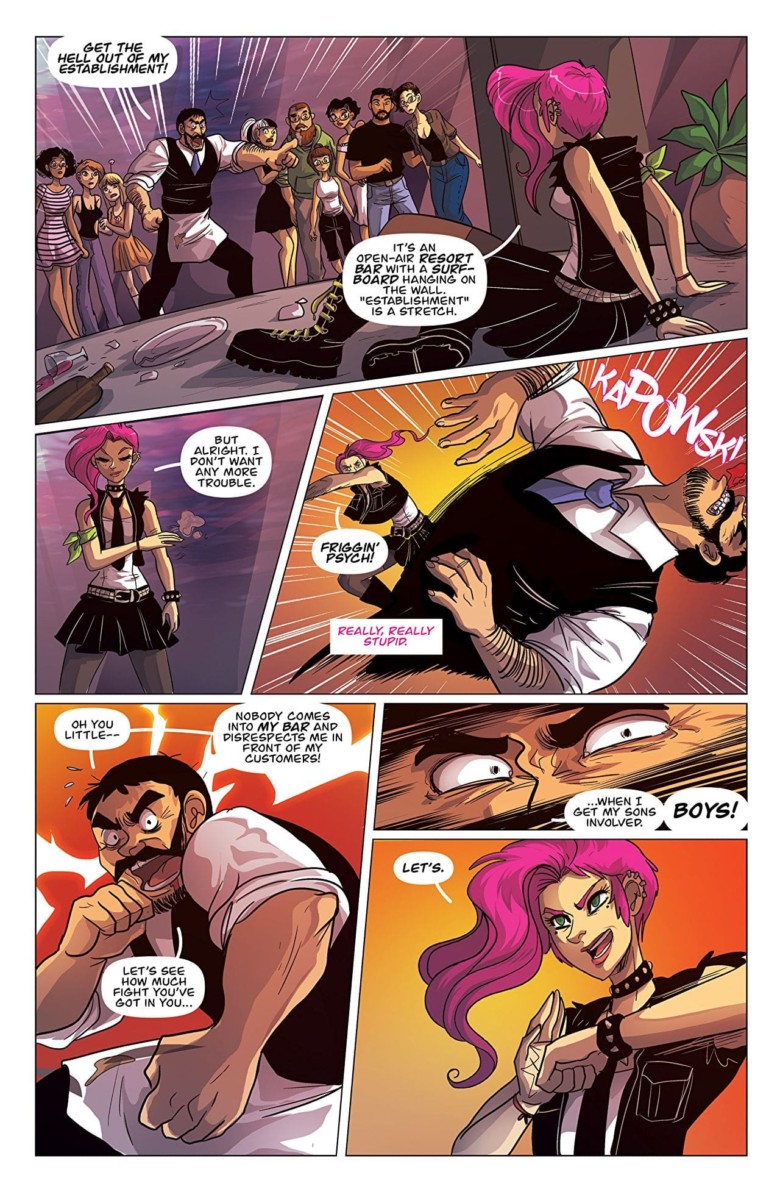 In order to obtain hormone treatments and surgeries, trans people are required to get authorization from a specialized therapist called a gender therapist. For decades, gender therapy has utilized a model where trans people could only acquire these things after they proved they were “really” the gender they identify as. In order to do that, you have to play up heterosexuality and traditional gender roles. After all, if you’re a trans woman who crushes on girls and loves ripped jeans, your therapist might tell you it would be easier to just “stay a man.”

Frighteningly, during the 70s, psychologists Suzanne Kessler and Wendy McKenna recalled hearing clinicians at panels who openly admitted to using their “own sexual interest as a criterion for deciding whether a transsexual is really the gender he/she claims.” Basically, this created a filter where the only people who could transition were those with the approval of the heterosexual men who dominated the mental health industry: no lesbians, no trans men, no nonbinaries allowed.

These practices have updated in recent decades; now it’s easier for those formerly blocked to access hormones. However, everything is still about straight cis men’s relationship to those transitioning. Cisgender men write, direct, and star in movies about specifically trans women all the time, from STONEWALL to DALLAS BUYERS CLUB.

READ: Here’s more on the depiction of trans women in media!

Every single time, such stories portray these sad women in tragic romances with men they can never be with until they get “The Surgery.” Needless to say, in real life, people are constantly asking trans people invasive questions about their genitals as well. It’s as if these bodies belong to the public, rather than the people inhabiting them.

Why KIM AND KIM Matters

Kim Q. actively challenges this narrative. She’s got a pink undercut and brawls with dudes in bars. There is no mention of reassignment surgery: her body is not up for public consumption. Neither is there any apologizing for or hiding of her queerness, nor any dramatizing some futile quest to fit into a culture that has no room for her. She’s found her own world, one with no room for cisgender heterosexual culture.

So has Kim D., whose biggest role models are other queer women. Despite her attraction to men, Kim D. barely has room for them in her action-packed life. And the narrative never hints that she’ll settle down with one of those rival male bounty hunters and forget all about her “weird bi phase.” Both Kims have waaaay more important things going on than that. After all, there are octopus people to save and rents that need paying!

In many ways, I’d say the fact that KIM AND KIM has an Eisner nomination is much bigger news for the LGBT+ community than LOVE IS LOVE’s nomination. We’re truly beginning to recognize that other gazes, other experiences of the world, are just as legitimate as the male one. There’s no need to conform for someone else’s approval. Our stories are already entertaining enough on their own.