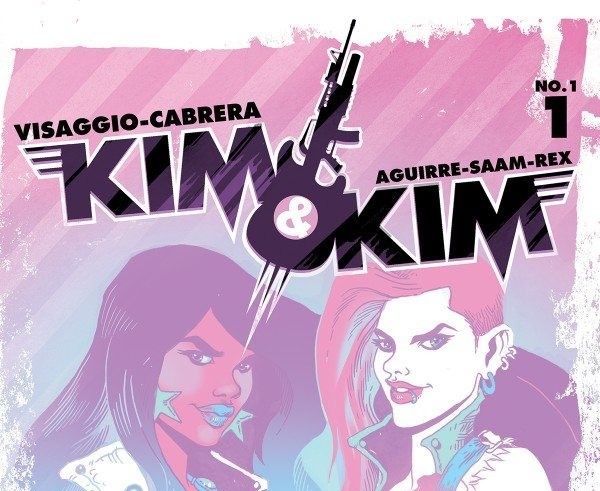 KIM & KIM is the latest book in what is shaping up to be a long line of remarkable comics from indie-punk publisher Black Mask Studios. The first issue reads as if it was synthesized from equal parts Broad City, PUNK ROCK JESUS, and Steven Universe, with a splash of Team Rocket’s Jesse and James thrown in for good measure. KIM & KIM follows titular characters Kimiko “Kim Q.” Quatro and Kimber “Kim D.” Dantzler, two queer female bounty hunters on an assortment of interplanetary escapades facilitated by a beat-up, but still space-worthy VW bus. Conceived while writer Magdalene Visaggio was navigating her own transition, KIM & KIM features something that’s been missing from the world of comics for far too long: a confident and commanding trans protagonist.

READ: Want more from Black Mask Studios? Check out our review of their new book, 4 KIDS WALK INTO A BANK!

In the first issue alone, Visaggio takes readers from bourgeois cafés in wealthy cloud-level metropolises all the way to punk shows on a “smuggler paradise desert planet” complete with a vibrant community theatre and everywhere in between. While Visaggio’s ability to build worlds is great, it pales in comparison to her proficiency in characterization. While many writers devote the first issue of a comic to revealing the characters’ origins, Visaggio instead presents readers with two fully formed protagonists, and uses casual dialogue as a vessel through which to deliver hints at their backstories for readers to piece together. After a bounty is vacated and the Kims are unable to collect, they take to the cosmos in search of another target. This search leads them through the tea halls and alleys of a planet called Clovis, where they encounter the target of a rival team of bounty hunters, Columbus and Saar, who are under the employ of Kim Q.’s father, Furious Quatro. 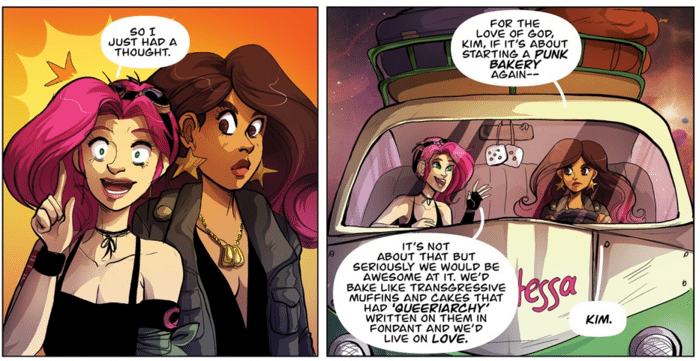 Kim D. is certainly the more grounded and professional of the two bounty hunters. While her style ranges from crust punk chic all the way to tactical-combat-femme, she remains seated in the reality of her vocation and its associated politics. Financial independence and stability always seems to occupy a portion of her mind.

READ: To better understand why KIM & KIM is so important in terms of queer representation, check out this piece on straightwashing in Marvel’s HERCULES!

Punk kids both past and present of any and all gender identities will find a kindred spirit in Kim Q., who first appears clad in fishnets, a spiked choker, and a bandeau reading “WHAT THE HELL,” while swinging an electric guitar (her weapon of choice) through the air like a war hammer. Animated and aesthetically bold, Kim Q. is the most punk (if such a thing exists) character in comics since Tank Girl. I will be genuinely shocked if she does not attain an immense following both within and outside of the queer punk community before the fourth issue of KIM & KIM hits shelves.

Unlike your standard cape comic, the Kims aren’t looking to save the universe from complete annihilation, but rather just trying to keep fuel in the tank, with the ever-present goal of taking advantage of a bounty with “a reward large enough to keep [them] in horror comics and boozemohol for five years.” Despite the story’s fantastical setting, the problems faced by the two Kims are surprisingly real. Anxieties surrounding not being able to support oneself financially and tension with family members are very present in the lives of those emerging into adulthood, especially in the lives of those who identify as queer and/or trans. Keeping this in mind, it seems fitting that KIM & KIM is more a story of survival than a traditional hero narrative.

Though she is responsible for the book’s driving narrative, KIM & KIM #1’s success as a whole should not be attributed to Visaggio alone. KIM & KIM #1’s artistic team, penciler Eva Cabrera and colorist Claudia Aguirre deserve accolades for stylizing the environment and characters to which Visaggio’s words adhere. Cabrera’s work blends a Saturday morning cartoon vibe with what appears to be some manga influence. Though cartoonish in style, goofy is not an applicable adjective to Cabrera’s art. Without straying into the realm of hyperrealism, Cabrera is able to successfully convey a wide range of powerful emotions through the characters’ facial expressions. When paired with Aguirre’s color palette, the result is a peculiar aesthetic cocktail of the original Teen Titans series mixed with Lisa Frank.

Black Mask Studios continues to impress with each new release but have outdone themselves with KIM & KIM #1, unquestionably one of the greatest series debuts I’ve read this year.  The marriage of Visaggio’s words and the art of Cabrera and Aguirre makes for a story that is entertaining, visually pleasing, and left me eager for more. The only upsetting aspect of this comic, is that we have to wait a few weeks to find out what happens next.