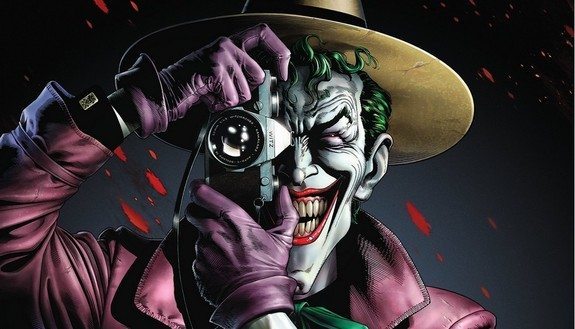 With only THE DARK KNIGHT RETURNS and THE LONG HALLOWEEN as worthy competition, Alan Moore’s THE KILLING JOKE is considered by comic book fans to be the greatest Batman stories ever written. More importantly though, it serves as the definitive Batman-Joker story in the eyes of Bat-fans, being the first to really draw these characters as opposite sides of the same coin. One man fights for order and justice, while the other sides for chaos and madness, but both were shaped by the same tragic event: having “one bad day.” With the release of its animated adaptation only a few weeks away, I think it’s about time we took a good look at THE KILLING JOKE and how it transformed the relationship between these characters into the greatest comic book rivalry of all time. 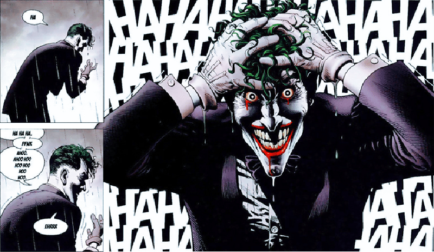 While the 1970’s Batman comics were the first to draw the Caped Crusader out of the campy Adam West image, it was Frank Miller’s THE DARK KNIGHT RETURNS that truly cemented the dark and brooding figure into the mainstream’s mind. It was also during this period of time that stories like TDKR and Moore’s own WATCHMEN began to transform the comic industry in general. No longer were these books just colorful entertainment for kids, but now they were being expanded to a more mature audience, mainly by bringing a darker perspective to the superhero genre that hadn’t been seen before. THE KILLING JOKE followed up on their trail of dark and gritty storytelling, but where RETURNS and WATCHMEN dealt with worldwide social/political issues, this was a more personal and intimate chapter in the Dark Knight’s legacy. It was another example of the Joker breaking out and causing a scheme, with Batman trying to stop him, but this time the story went beyond a simple means of cause and effect. There were consequences to the Joker’s actions and a deeper game playing out between our two foes, one that would revolutionize their relationship forever.

While the overall actions of the Joker feel like another day in the life of Batman, THE KILLING JOKE  molds this simplistic-looking structure into a never-ending battle of good vs. evil, as well as where such a fight will lead both sides. From the very beginning, we see Batman walk into the Joker’s cell at Arkham Asylum not to interrogate him, but to talk with him. He discusses their relationship with a sense of foreboding, as if he knows their fate is inevitable yet wishes to find a solution before someone goes too far. What’s more significant is his decision to make at least one genuine attempt at talking to his enemy, one who he is unable to understand but remains willing to reach out to before anymore innocent lives are harmed. In this sense, Batman represents the side of order, a man who lost so much tragedy yet chooses to use his power and wealth to prevent such a fate from befalling anyone else. Even for someone like the Joker, Batman does not want their blood, or death, to be on his hands.

On the other side, we have the Joker, a man whose origin has been shrouded in mystery; his persona that of a nihilist who sanity as an illusion and chaos as his reality. Even though this comic presents us with the closest thing we will ever get to a Joker origin story, there’s no real way to determine whether or not this is a lie or warped reality designed to trick us into sympathizing with his character. The Joker himself admits that even he doesn’t know how much of his past is true, feeling that “if [he’s] going to have a past, [he’d] prefer it to be multiple choice!” However, the one thing in this rather iffy backstory that makes the Joker a reflection of Batman is how he suffered from having “one bad day.” Losing his wife, job and even identity to bad luck and tragedy, all that was left after the dust had settled was a man who chose to embrace the cruelty of the world, seeing it all as one great big joke. Where Batman chose to make sure that no one would ever have to experience such pain and misery, the Joker wishes to spread that misery, feeling that all it takes is “one bad day” to make someone just like him. 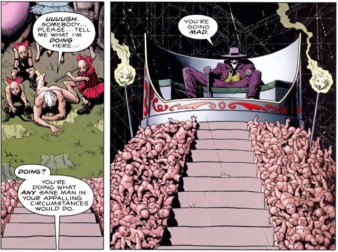 In the center of these two characters is Commissioner Gordon, who serves as a test subject for Joker’s theory of madness. The scene in which the Joker casually shoots Barbara Gordon in the spine, right in front of her father, is one of the darkest moments in comic book history. It goes into very mature and uncomfortable territory by taking an established character of the Batman mythos and effectively paralyzing her, an act that the Joker wouldn’t top until A DEATH IN THE FAMILY a few years later. But more importantly, this horrendous act serves as a means for Joker to prove his point: that even a good man like the Commissioner could go mad, given the right circumstances. To him, everyone has that small bit of insanity lying inside them, waiting for the right moment to come out and wreck havoc upon the world. If Gordon can fall victim to insanity so easily, then what chance would someone like Batman have, a man who still remains affected by this “one bad day.”

READ: The most essential Batman stories for Bat-fans

However, by the end of the book, the Joker’s hypothesis has been proven wrong. Despite placing Gordon in a state of humiliation and torturing him with images of his daughter, suffering and naked, he doesn’t crack. Gordon still retains his moral code by the end of the story, telling Batman to have Joker “brought in by the book.” This leads to a climactic final battle between the two sides, ending with Batman trying to reach out with reason instead of fists. He knows that this battle between them will only end with one outcome, one that he still does not wish to inflict upon the Joker, despite everything that he’s done. In a sense, Batman gets the Joker, having been himself a victim of tragedy and thus able to understand the pain that Joker has gone through. Perhaps deep down, he knows that the Joker will reject his help, but as Batman mentioned at the beginning of this story, he needs to know that he tried to reach out at least once. And, in what is probably one of the few moments of sanity I’ve ever seen from his character, the Joker considers Bat’s offer for a single panel before turning it down, claiming that it is already too late. 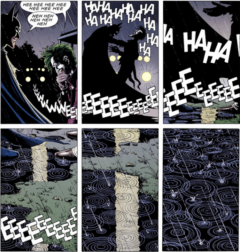 After telling Batman a joke that serves as a representation of their antagonistic relationship, both he and the Joker share a laugh as the police arrive and the comic ends on an ambiguous note. Readers are left watching those last few panels without a solid answer regarding what happened next, the book never elaborating on whether or not Batman took the Joker back to prison or strangled him then and there. Regardless, either argument works in this case because both tie into the themes of how our characters reacted in the face of having “one bad day.” Had Batman resorted to murder, he would have proven the Joker’s theory of madness to be correct, with Barbara’s paralysis and Gordon’s torture being the spark that sets him off towards a path of insanity. The Joker would have died, but he would die knowing that it he was right in the end, that even Batman could be driven mad.

However, I’d like to think that Batman let the Joker live, and not just because the artwork shows his hands closer to the Joker’s shoulders rather than his neck. Despite all the harm done to those closest to him, Batman choosing to reject Joker’s outlook on life shows that he is still committed to the way of law and order. To go into detail throughout this entire story on how he wants to help the Joker, only to murder him in the last page, would seem to go against what Batman is supposed to represent here. He could have gone down the same path as the Joker, but he chose not to do so. Instead, Batman rejected the madness that should have come with his tragedy and used it as motivation of driving his crusade forward, to protect the innocent. For all the injustices and “bad days” that exist in the world, Batman needs to prove that the Joker’s philosophy is wrong, because he knows he could have very well ended up going on the path that Joker did. He needs to believe that his/Gordon’s way works, because that is what keeps him human.

THE KILLING JOKE is a story of choices and mentality, with Batman and Joker serving as two outcomes of a similar path. Both were defined by tragedy, with one choosing to reject the madness in favor of hope, and the other embracing it in order to cope with the pain. For all the horror that befell the Gordon family, horror which would be felt throughout the canon DC storyline, it is the depiction of our hero and villain’s relationship that elevates this story from a great comic to a masterpiece. It established how much alike these two characters are, and how far one would go to make someone like himself. All because of “one bad day.”