ComicsVerse reached out to Amit Chauhan, one part of YAKUZA DEMON KILLERS’ creative force, to discuss his inspirations, his travels and his affinity for the darker genres.

ComicsVerse: According to your website, you are “a British comic writer now residing in New York City”. What was your relationship with comics growing up? What made you decide to start creating comics? And why New York?

Amit Chauhan: Comics, for me, provided an escape from the real world. I grew up in Leyton, a working-class neighborhood located in the east end of London. As a child, I always had an overactive imagination and comics transported me to magical backdrops like Metropolis and New York City, where anything seemed possible. Comics were a conduit, nurturing the earliest sparks of creativity in me.

What made me start creating comics? That was a mixture of things. I always enjoyed writing stories as a kid. When I went to college, I studied film with the intention of writing movies one day. I always read comics, but it didn’t seem like a viable career path because the (comics) industry in England was small and didn’t have the depth of companies that the US market possesses.

However, when I moved to the states a decade ago, the thought of writing comics became an achievable dream. One day, by happenstance, I was in a diner with friends and they knew an artist who at the time was working for Marvel on X-MEN. He had joined us for a bite and we were chatting about story ideas. Not for comics, just ideas I had for films. He asked me if I had considered writing comics, but I had only kept up with comics from the big two and worried that my style was too dark and noir. He quickly pointed to a slew of new comics aimed at an older audience. There was an undercurrent of new creators breaking through who were creating edgy work that shared my aesthetic. After that chat, I started down the road of self-publishing, which taught me the craft of making comics. Scripting comics is very different from scripting movies, so I had to learn the process through trial and error. That foundation got me to where I am today.

CV: Are there differences between the comic book community and culture in the UK and the US?

AC: That’s a difficult question for me to answer because I have lived in the US for the past decade and, during that time, comic book culture has evolved at a rapid pace. Comics are cool now, but as a kid it was almost frowned upon to admit you read comics. Now with comic book movies, the genre has exploded and become a global mainstream entity.

Growing up, there were no comic book stores in my neighborhood. I picked up my books from a market stall. The owner had a tatty cardboard box with a random assortment of back issues for 20 pence per comic, and I would pick up a handful each week. I didn’t know many people that read comics, as most of my friends were die-hard soccer fans.

CV: BUTCHER: A LESSON IN CRIMINALITY, another series you have successfully crowdfunded, is gritty and violent. 13TH ARTIFACT is a dark sci-fi thriller. YAKUZA DEMON KILLERS – it’s all in the title. It seems like you have an appreciation for the darker genres. What are some of your favorite comics and writers? What inspired you to write YDK?

AC: I do lean towards darker stories. 13TH ARTIFACT was a one-shot, so I didn’t have the page count to delve into much character history. However, in my other books, BUTCHER and YAKUZA DEMON KILLERS, I like to focus on the shades of grey. Good guys versus bad guys is a scenario that doesn’t happen in the worlds I create. I’ve always subscribed to the notion that, in a villain’s mind, he is the hero of his own story. I like telling those kinds of stories. Another key aspect of my writing is dark humor. It’s an important element that helps connect the reader with the characters. I always think of the Charlie Chaplin quote “Anyone can make them cry, but it takes a genius to make them laugh.”

The idea for YDK evolved and stewed for years. It was the culmination of a lot of pondering and brainstorming. The story features a strong female lead, something that was inspired by the counter-culture TANK GIRL comics. I always loved characters with attitude. Ochita in YDK is not perfect and has a mouth that will often get her into trouble. 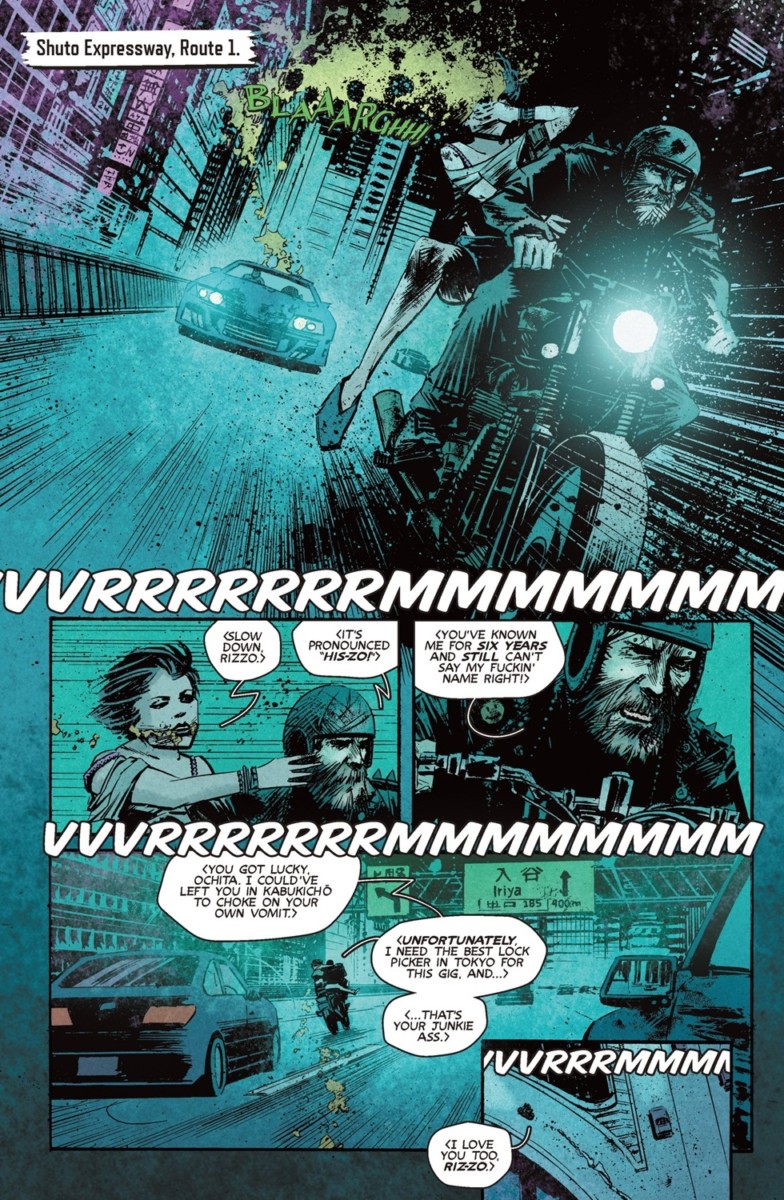 In terms of comic writers, I identify with the U.K auteurs like Alan Moore, Grant Morrison etc. It sounds funny, but England is such a grey and overcast place, so when we British read American comics set in the shiny, sparkly cities like New York or Metropolis, I feel there is a separation from what we experience in England. Of course, Gotham does exist in American comics, but I feel it is there solely as the antithesis to the wonders of Metropolis and Superman. Moore took these thoughts, mixed with inherent British cynicism and political anxieties, and molded comics into his vision. Grant Morrison takes a different approach. He sees the magical properties of life, which often bloom out of bleak circumstances. I enjoy his thought provoking counter-culture commentary mixed with magical-realism.

Story-wise, the “Judge Death” arc by Wagner and Bolland in 2000AD was a massive influence on me. It came out in the eighties, but it stands the test of time. It is an absolute masterpiece with genius plotting, and wonderful sequentials. It opened my eyes to the artistic heights that the comic book medium could achieve.

READ: Want more of his work? Read our review of Amit’s 13TH ARTIFACT #1!

CV: As I understand it, all of the locations depicted in YDK are accurate?

AC: Last year I spent a month in Japan and did some location scouting for YDK. Below are some of the pictures I snapped. 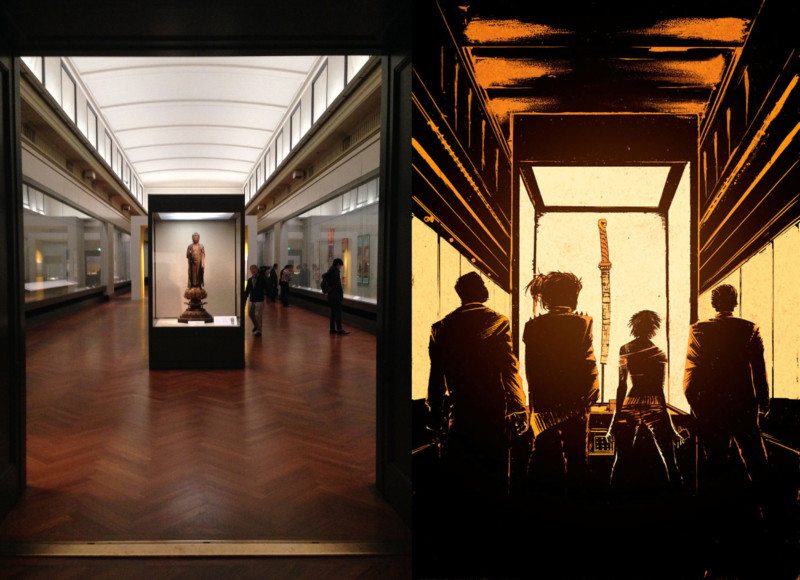 CV: This is the third project you’ve worked on with Eli Powell. How did the two of you first connect?

AC: We met at New York’s MOCCA Fest in 2015. I was there as an attendee with my sister, and as we were walking around my sister spotted Eli’s work. Eli is such a fantastic talent, and I instantly knew I wanted to work with him.

We began chatting, hit it off, and then began working on BUTCHER. During this time, we have also become close friends. It’s been fun sharing this journey with a buddy. 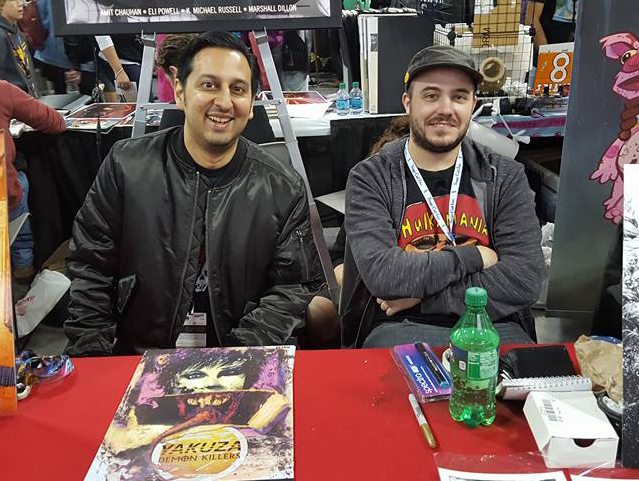 CV: What are some risks you took by crowdfunding your comics? And what advice would you give to those looking to do the same?

AC: There is no real risk in crowdfunding unless you don’t do the necessary research. So, the advice I would give to anyone wanting to crowdfund their next project is to make sure you fully research what the costs will be. You don’t want to fund a project and realize that you didn’t budget enough money for shipping, packaging, rewards, etc. I have heard horror stories about that kind of stuff. If you have worked out your budgets, then you should be good to go!

CV: You’ve been on a roll – all of your incredible projects have been successful, with Eli and yourself crowdfunding BUTCHER, winning the Top Cow Talent Hunt, and the incredible response to YKD. What’s next?

AC: Hopefully more of the same. Whether you have just started in the industry or you are an established veteran, you must always be pitching ideas. It is a hustle-driven business. Every publisher has their slate, and writers must come up with fresh appealing ideas for them to be green-light. I have a few new stories in the works. Hopefully they will find a good home.

Find YAKUZA DEMON KILLERS #1 & #2 at your local comic book store! Stay up to date with Amit on his website and Twitter.