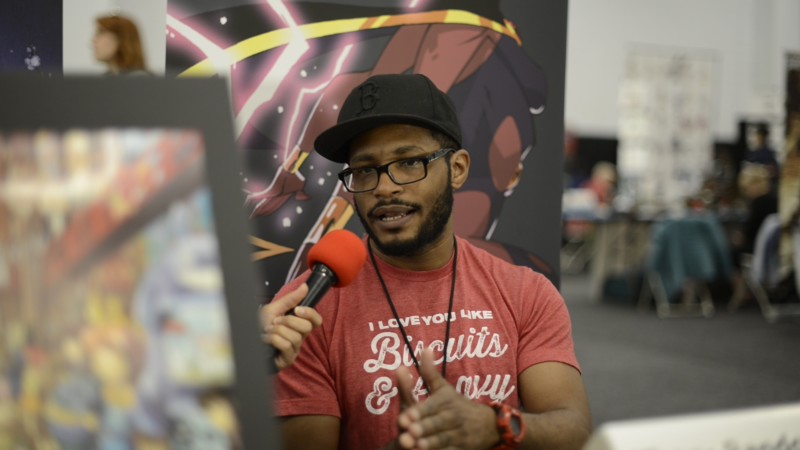 We got the chance to talk to the wonderful Khary Randolph at Five Points Fest. Khary has worked on a number of incredible projects including MOSAIC, BLACK, TECH JACKET, STARBORN, ROBIN WAR, DEADPOOL, and more.

Khary spoke with us about his goals as an artist, his experiences with animation and illustration, and how comic books impacted his stylistic choices. Randolph was also able to share his thoughts on diversity in the industry and whether there was any merit to the claim that diversity doesn’t sell, a recent point of contention between some publishers and audiences.

Khary Randolph graduated from the School of Visual Arts in 2000 with a BFA in Cartooning and Illustration. He’s since been working between the worlds of the comic book industry, animation and licensing for about 10 years. Khary has pencilled and inked some incredible titles, as well as producing some wonderful cover art for series like JUSTICE LEAGUE BEYOND, HARLEY QUINN, CHARISMAGIC, and more.

Khary currently illustrates MOSAIC, a series he co-created with writer Geoffrey Thorne. MOSAIC features Morris Sackett, an arrogant superstar athlete that has a freak accident involving Terrigen Mist and loses his physical form. Instead, he is able to manifest host bodies. He is affected by the memories and experiences of each body he inhabits. Khary and Thorne are a phenomenal creative team that is able to create a series that sees this complex anti-hero evolve.

Randolph was part of a superstar creative team that independently produced BLACK, a comic built on the premise: “What if only black people had superpowers?” Funded through Kickstarter, fans pledged $91,973, over $60,000 more than its $29,999 goal. Along with Kwanza Osajyefo, Tim Smith III, Jamal Igle and Sarah Litt, Khary was able to produce a series is so popular that it regularly immediately sells out as soon as it is available.

WATCH: ComicsVerse got the chance to interview Jamal Igle at NYCC 2016!