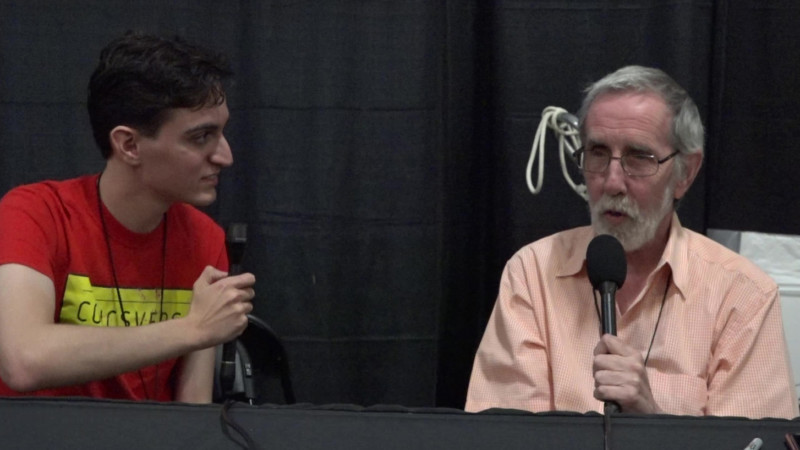 ComicsVerse was lucky enough to catch up with comic book artist and writer Keith Giffen at this year’s East Coast Comic Con in New Jersey. Giffen is currently working on several series, including two top-secret projects that he can’t even mention by name! To hear more about his creations and current work, watch the full Keith Giffen interview above.

In our Keith Giffen interview, we asked him about his favorite creation. He told us all about why he likes to write for a character that has his voice. What is this character? It’ll surprise you! Giffen worked on well-known titles like JUSTICE LEAGUE INTERNATIONAL. In addition, he co-created the massively successful Lobo, his favorite is a significantly lesser-known character. Next, we asked him about his creative process, but unfortunately, he didn’t want to risk exploring the fragile process. Then we asked about DC’s THE KAMANDI CHALLENGE and bringing back older, lesser-known characters. Keith was happy to talk about it!. He said for him, THE KAMANDI CHALLENGE was m0re about the people he was working with than the character, who isn’t his favorite.

Lastly, we asked him about current and upcoming work, and he teased two major upcoming projects that are strictly hush-hush, so all we got is that he’s been wanting one of them for quite some time. I, for one, am very excited to see what those projects are, and I’m sure with Keith Giffen on board they’ll be high-quality stuff.

READ: Kamandi may not be his favorite, but he’s one of mine! Here’s why you should be reading THE KAMANDI CHALLENGE!

Keith Giffen is a prolific writer and artist who has worked with both DC and Marvel extensively, as well as smaller publishers like Valiant. He co-created fan favorite Lobo and his favorite Ambush Bug for DC and worked extensively on acclaimed JUSTICE LEAGUE spinoffs JUSTICE LEAGUE INTERNATIONAL and JUSTICE LEAGUE EUROPE. He co-created Rocket Raccoon for Marvel and worked on titles like DRAX THE DESTROYER and THE DEFENDERS. Outside of comics, he also worked on TV shows including ED, EDD, ‘N’ EDDY.