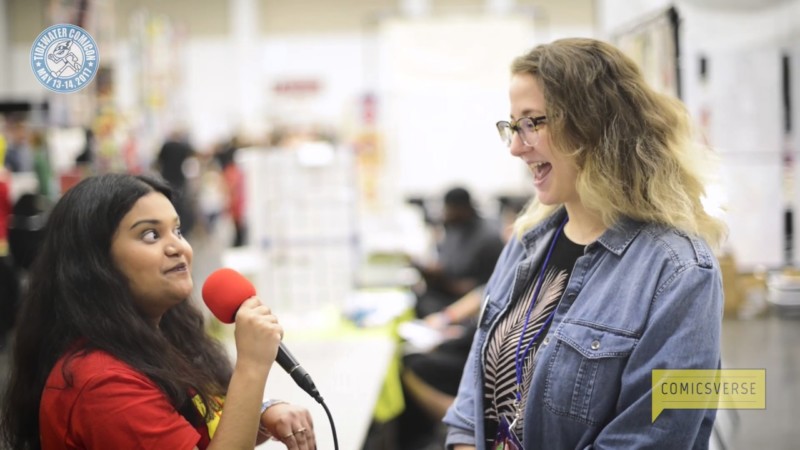 ComicsVerse had the absolute pleasure to interview comic book artist, Katy Farina, at the Tidewater Comicon in Virginia Beach. Katy is a freelance artist from Charlotte. She is known for her mesmerizing artwork for the comic book series of Steven Universe, The Amazing World Of Gumball, and Rick and Morty.

Katy and I talked about her inspiration for pursuing a career as a comic book artist. She has been a Manga comics fan since a very young age. At fourteen, Katy started drawing and hasn’t stopped since. Prior to attending Minneapolis College of Art and Design, Katy trained herself. Katy Farina says she is a mix of an old school and a digital artist as she likes to put down her thought process in a sketch book, but believes digital artwork allows much more freedom.

Prior to doing the artwork for the comic book series of Steven Universe, Katy was an avid fan of the show. She was extremely excited when she was asked to do the artwork for the comic book series. Her favorite aspect of the show is the strong relationships between the characters. Although it is difficult to pick one, her favorite gem is Garnet, and Peridot is a close second. Among the human characters, she is fond of Connie the most, and to her utter surprise, she is also starting to like Mayor Dewy now.

What’s Next for Katy Farina?

Katy Farina is working on a few upcoming projects. While she doesn’t want to share them with us yet, she definitely wants us to stay tuned as exciting things are around the corner. In the meantime, you can take a look at her artwork in her website and support her work on Patreon.
You may also find Katy on Twitter, Instagram, and Tumblr.