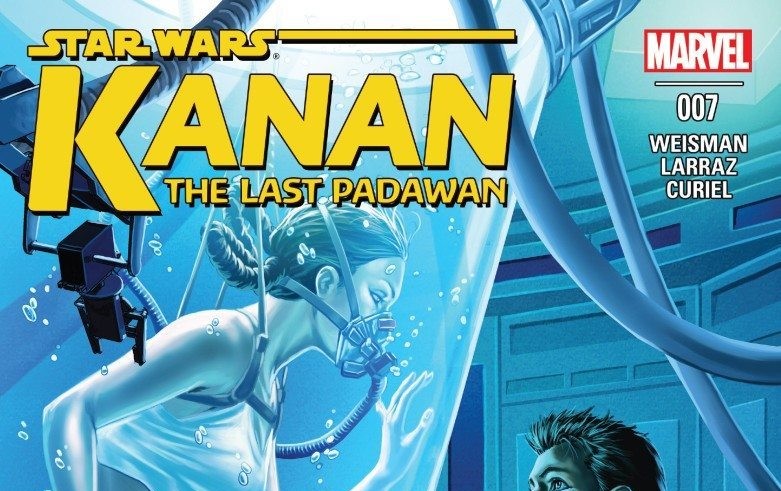 KANAN: THE LAST PADAWAN goes back in time once again, this time to Kanan’s days at the Jedi Temple, and it makes for the series’ best issue yet.

We begin where we left off last issue, with Kanan. His injury last issue earns him some time recovering in a bacta tank, where his mind drifts back to his days as a young Initiate within the Jedi Order. While training, he meets Jedi Master Depa Billaba, newly returned from the front of the Clone Wars. The two quickly develop a bond as they find themselves on the frontier of learning a new lesson, one that may be put to the test sooner rather than later… 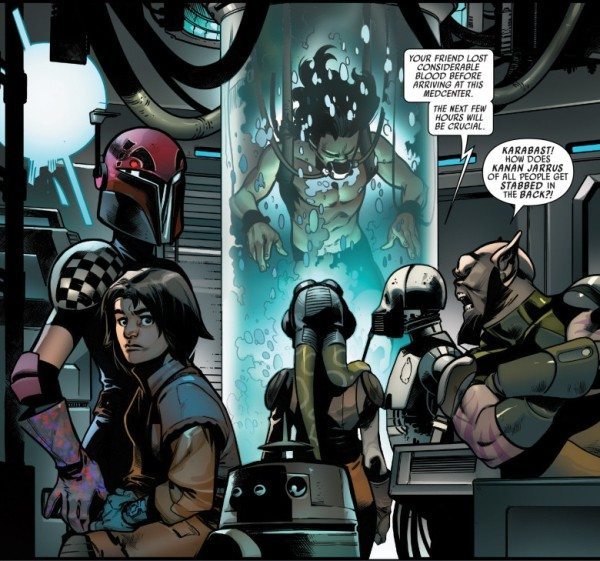 I’ve said it before and I’ll say it again; while there may not be a whole lot to appreciate within the Star Wars prequels themselves, the world they helped create has proved–and in the case of KANAN: THE LAST PADAWAN #7, still proves–bountiful. Without the prequels, we don’t get STAR WARS: CLONE WARS, and maybe not even STAR WARS: REBELS. While I am wholly grateful for those two, I am especially grateful, after reading this issue, for KANAN: THE LAST PADAWAN. 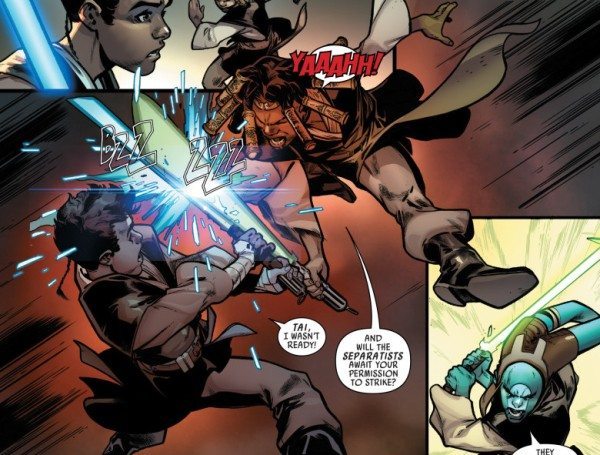 READ: our last review of KANAN: THE LAST PADAWAN to catch up on all of the Star Wars madness!

Okay, let me rewind: KANAN: THE LAW PADAWN is exciting for fans of Star Wars not intimately familiar with the old Expanded Universe. I’m sure there is a great deal within the Star Wars EU (now known as Star Wars Legends) written on the Jedi, on the history and the mythology of the Jedi, and on the more practical, day-to-day training of the Jedi. For me, though, whose experience with the Star Wars EU is small enough to be negligible, getting to spend more time at the Jedi Temple is always welcome. The episodes of CLONE WARS that took place at the Jedi Temple, or training Jedi in general were, for me, were among the series’ best (especially the episode in which the younglings go with Yoda to find their lightsaber crystals). Okay, before I go any further I have to say: most episodes that focus on the Clones in my opinion are most certainly the best episodes of the series, but I digress.

Despite KANAN #6 taking place mostly in the present (within the timeline of STAR WARS: REBELS), KANAN: THE LAST PADAWAN #7 blasts us back into the past yet again. I have to wonder if the present and the rest of the crew of the Ghost will play a role in this series beyond just framing devices for flashbacks. It’s fine if they aren’t, of course–there’s an entire TV show dedicated to them, and the comic is billed as the secret history of Kanan–but the comic is getting to the point where it feels as if it has to make up its mind about its role in the ongoing narrative. (In fact, last issue, the title was just KANAN, and this time it’s, again, KANAN: THE LAST PADAWAN, which only highlights the confusion more.)

READ: Wanna catch up on every Star Wars title? Check our every single Star Wars article every posted here!

Beyond that though, I have very little bad to say about KANAN: THE LAST PADAWAN #7. The art is as vibrantly rendered as ever, as if the team is having an exceptional amount of fun doing so. That fun makes the issue, in turn, fun to experience. Each panel seems so big, so full of life and energy, that they’re all joys to behold. It’s a style suited to this particular story because at its center are young Jedi who are all energy, especially Caleb Dume, a.k.a., Kanan, the last Padawan.

We also get to see the beginnings of his bond with Jedi Master Depa Billaba, within the context of the Jedi Temple and its teachings. The dynamic between Billaba and fellow Jedi Masters Yoda, Mace Windu, and Obi-Wan Kenobi (and, by extension, her future Padawan, Kanan) is exciting to watch play out. You can see she’s potentially as troublesome as Anakin Skywalker, thereby drawing the admiration of Obi-Wan, the cautious and hidden appreciation of Yoda, and the exasperation of Mace Windu–something that draws her to Kanan, and he to her. Kanan is just as precocious as she is, typified in his direct questioning of whether she is fit to return to active duty.

He doesn’t mean it in an insulting fashion, he’s just, as Billaba describes, “not politic.” Billaba also suffered a great loss on the battlefield, and the Jedi Council is observing her–she may be physically fit again, but they wonder about her mental and emotional state. That makes her a compelling figure, one who adds to the drama at the heart of her relationship with Kanan. She isn’t just the “perfect” Master that died to serve her function in Kanan’s story; she now has her own issues, her own things to deal with, and there’s potential for Kanan to be just as important to her story as she is to his. She’s immediately worthy of her own title.

Slice this emotional journey together with action sequences (both Temple-sanctioned and not), and you have an issue bursting with excitement and character and world-building that makes it the series’ best yet. It’s not necessary for you to watch STAR WARS REBELS to understand what happens here, but you’ll certainly benefit, and this comic makes the show so much better. The Star Wars comics published by Marvel have been a mixed bag in terms of how they contribute to the franchise, and KANAN: THE LAST PADAWN distinguishes itself as one of the good ones. For Star Wars fans, it’s a must-read.