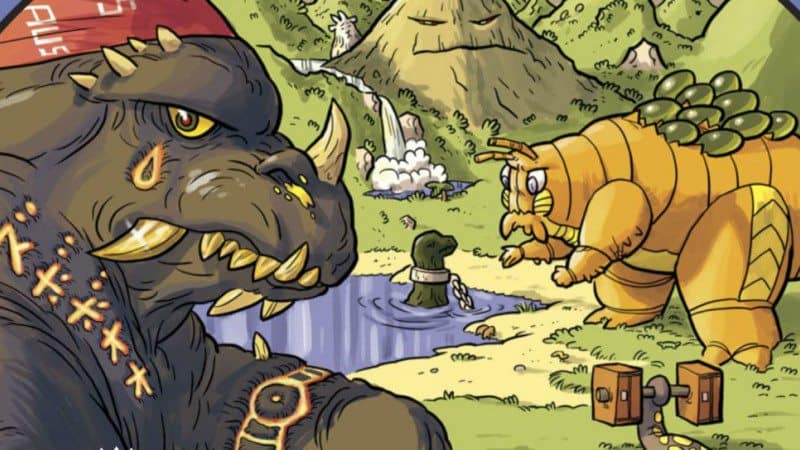 Picture this scenario: You’re a giant, sentient monster (not named Godzilla) who’s looking for food for your family of young monster offspring when — suddenly — you’re captured by humans. These humans ensnare you and take you to a maximum security prison where other monsters and mechas live in captivity. The humans wear uniforms that allow them to transform into giant beings (not named Ultraman) in order to keep the peace. This is the world that Eisner Award winner Zander Cannon wrote and illustrated in KAIJUMAX #1. This is a series that’s already a fair number of issues in, but this is where it all began.

READ: Want to know more about this series? Take a look at our interview with KAIJUMAX creator Zander Cannon!

This series stars a kaiju named Electrogor, a monster with the ability to use radioactive breath when he gets angry. Separated from his family, Electrogor has to navigate the new place that he finds himself in under the constant surveillance of the warden, Kang. Electrogor soon learns that most of the inmates cannot be trusted, save the ones he was captured with. Desperate to get food to his children, Electrogor speaks to the Creature from Devil’s Creek who tells him to visit Hellmoth, a reformed kaiju that looks like a barn owl covered with tattoos. Hellmoth is soon to be released from Kaijumax, hence Electrogor visiting him. 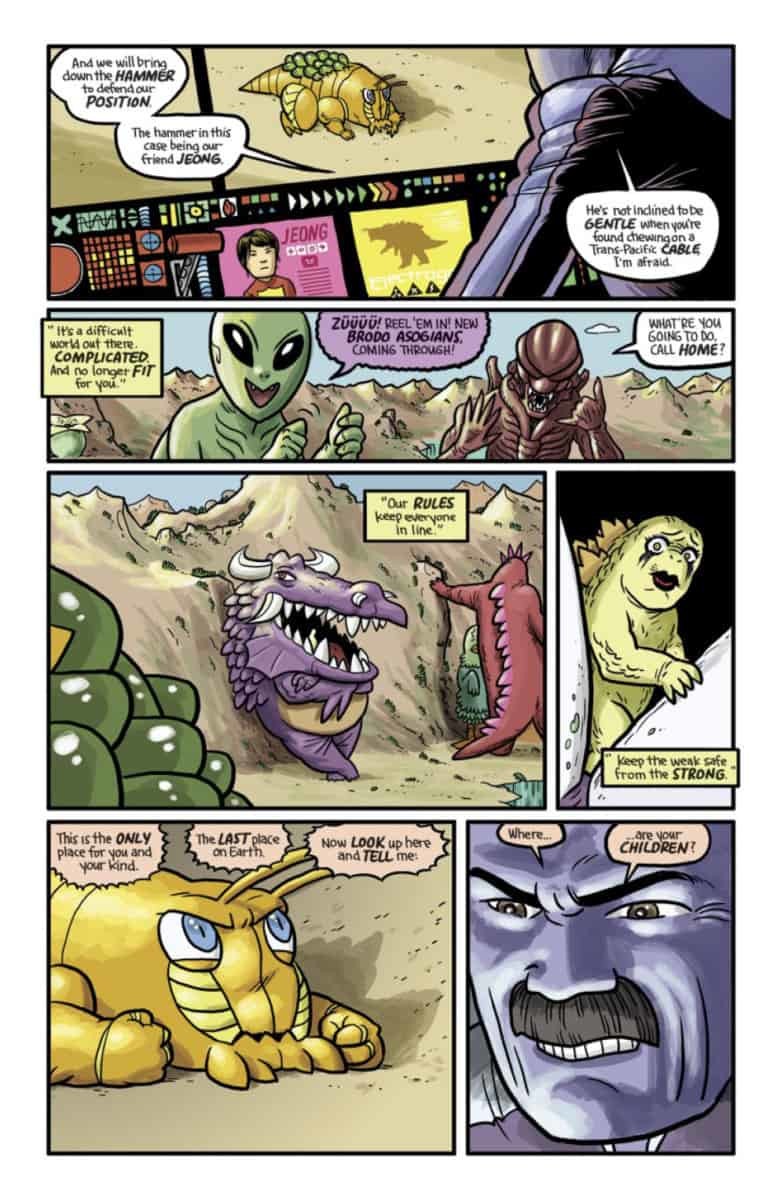 Electrogor is then asked by a Cryps gang member to whack a whale-ape and his son as a favor for being told to seek out Hellmoth. A brawl between the organic kaiju and religious mecha-kaiju ensues, prompting Electrogor to decide whether or not to kill the whale-ape and his son as planned. Electrogor opts to confront Kang instead. Kang transforms into a giant Ultraman-like being to quell the chaos. As a result of his act of defiance, Electrogor is banished for a week to “The Hole,” a solitary confinement area. There he learns from a prison guard named Gupta that Hellmoth was rumored to have wiped out an entire American town by eating everything, leaving no witnesses behind. This causes Electrogor to cry as he realizes that his kids might be Hellmoth’s next targets. The plot moves along at a brisk pace and establishes Kaijumax as a prison that operates on a system of fear and respect.

READ: Can’t get enough kaiju? Check out our thoughts on the Kafkaesque SHIN GODZILLA!

The art is an absolute delight from the first page to the very last, with the liberal use of bright colors to render the backgrounds and characters. Given the kaiju in the title, it’s no secret that they take the center stage and are uniquely imaginative. Electrogor seems intimidating with his large tail but has expressive eyes that show his vulnerability; the Creature from Devil’s Creek is a cowardly bipedal goat who gets half of his face burned by the prison guards as a test to see if he would fight back. Even the setting is creative! One of my favorite pages from this issue features a gym area where the weights are made to look like stuff that kaiju typically destroy. I love the way the panels zoom out to hilariously reveal that the building is attached to a machine designed to work the arms and back. 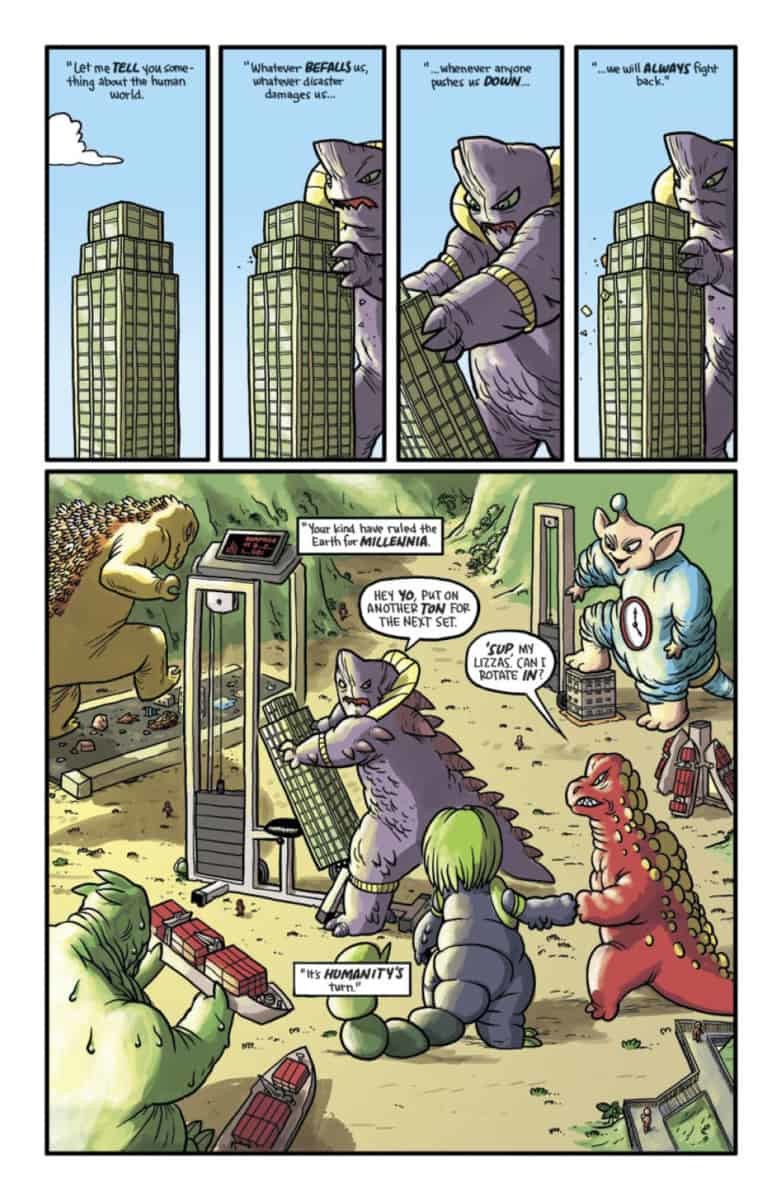 Cannon peppers in all kinds of humorous kaiju slang that fleshes out the world with nods to the source materials that inspired the series; such as “lizzas,” “life-cyclers,” “mon,” and “cloaker.” Characters tend to utter the phrase “Oh my Goj,” a subtle reference to Godzilla’s Japanese name, Gojira, which made me smile. In Kaijumax, Electrogor proclaims in meta-commentary that humans are the monsters, not the other way around so they should be imprisoned. I’m interested in seeing how Electrogor and Gupta’s relationship develops going forward because Gupta is one of the more sympathetic humans, unlike the menacing Kang.

READ: What do PACIFIC RIM and GODZILLA ’98 have in common? Here’s our critique of the failure of American kaiju! 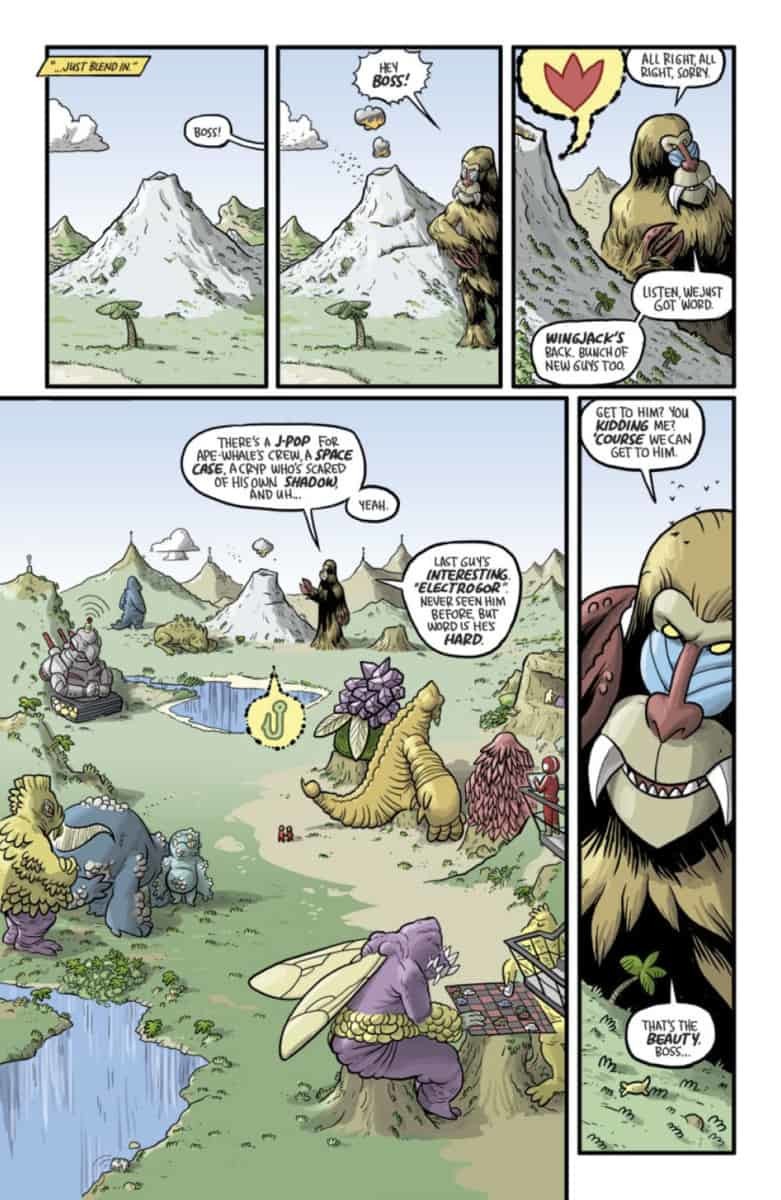 All in all, KAIJUMAX #1 is a well-written and brilliantly illustrated start to Electrogor’s adventures in Kaijumax. This series is a love letter to all things giant monsters that effectively humanizes them due to Cannon’s love of the genre. Writing and drawing a comic is a feat that not too many creators have accomplished successfully. I look forward to seeing how Electrogor manages to build his reputation and eventually escape from Kaijumax.