This final issue of JUSTICE LEAGUE VS. SUICIDE SQUAD does a fair job of setting up future installments, but suffers from a lackluster showdown. Strangely, it’s only after the epic battle between the old and new Justice League that the issue becomes entertaining. While the majority of the characters fail to make a big impact, characters like Killer Frost and Amanda Waller stand out.

READ: The previous issue of JUSTICE LEAGUE VS. SUICIDE SQUAD has Batman and the Squad ready to take on the Justice League. Read our review of the epic face off!

JUSTICE LEAGUE VS. SUICIDE SQUAD #6 picks up right after the terrifying reveal of Eclipso in the previous issue. Eclipso proves to be quite a threat, fixated on unraveling the inner darkness in men and pitting the Justice League members against Batman and his little Suicide Squad. Although the odds are against them, Batman and the Squad survive against the possessed members of the League. And under Bat’s leadership, Killer Frost manages to counteract Eclipso. 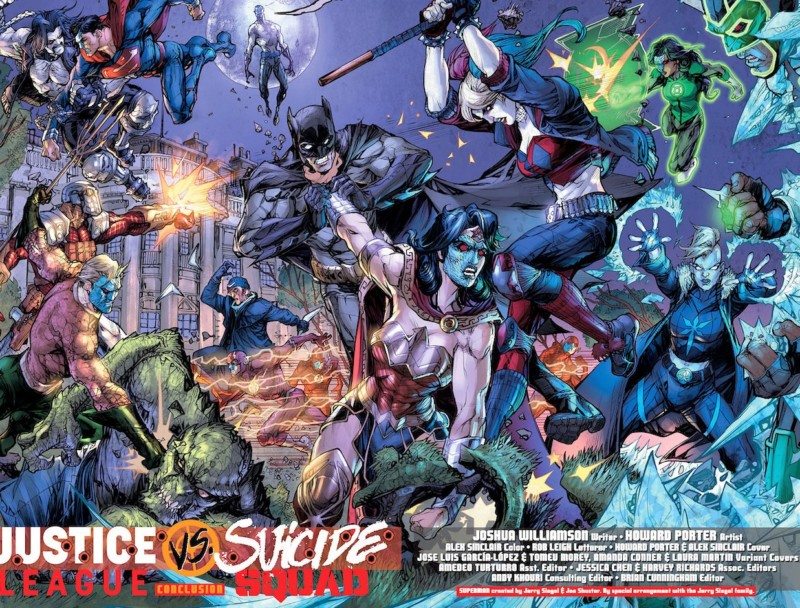 The first couple of pages of this issue have several character’s fighting each other, and it’s quite entertaining to see. Unfortunately, as the plot progresses, the panels only showcase fights involving Batman, Killer Frost, and Lobo. Everyone else is either in the background or just excluded (sorry Aquaman and majority of the Squad). Sure, maybe it’s too much to showcase every character, but this is the final showdown in the last issue of the storyline, dammit! You would imagine the finale going out with a bigger bang, but the creative team seems to play it safe. This issue could’ve definitely showcased more panels of other characters fighting. We deserve to see round 2 of the epic brawl between Aquaman and Killer Croc or Lobo and Superman, not just have them sidelined.

Eclipso also fails to leave an impression in this final issue. It’s not that Eclipso is a weak villain, but to only play a major part in one issue hurts the character’s lasting appeal. What’s worse is that we don’t even get a big hurrah between him and our heroes. For the most part, the character gives a generic speech, while waltzing with Amanda Waller. With such a misleading cover, Eclipso hardly gets in on the battle. With a title and concept involving two of DC’s most popular teams, it hurts to see the final issue have such a lackluster showdown with the main villain.

This is where the villain Maxwell Lord succeeds. The overarching storyline had more time to develop Maxwell, making him a much more interesting threat to the Justice League and Suicide Squad. Maxwell’s plan to have the old Suicide Squad go against the heroes and anti-heroes was much more engaging to see. It not only established the character’s motivation, but it also gave us an epic clash between the heroes and villains that we don’t get in this last issue.

While JUSTICE LEAGUE VS. SUICIDE SQUAD #6 falters with its villain, it succeeds with the characterization of Killer Frost and Amanda Waller. Killer Frost’s character felt like the only one out of the bunch that had some sort of development. Although it feels a bit forced, you get to see the former villain pick herself up from her mistakes. In a way, this whole storyline (which sets up her joining the JLA) serves her character the best, while, unfortunately, the other characters get lost in the spotlight. Amanda Waller on the other hand, proves again why she’s a force to be reckoned with. While this issue lacks the fun and interesting exchanges between the League and Squad seen in previous issues, Waller’s revelation at the end is the highlight of the story. This issue showcases Waller’s brilliance in orchestrating her schemes, making the character very flawed, yet an entertaining mastermind for the superhero genre. 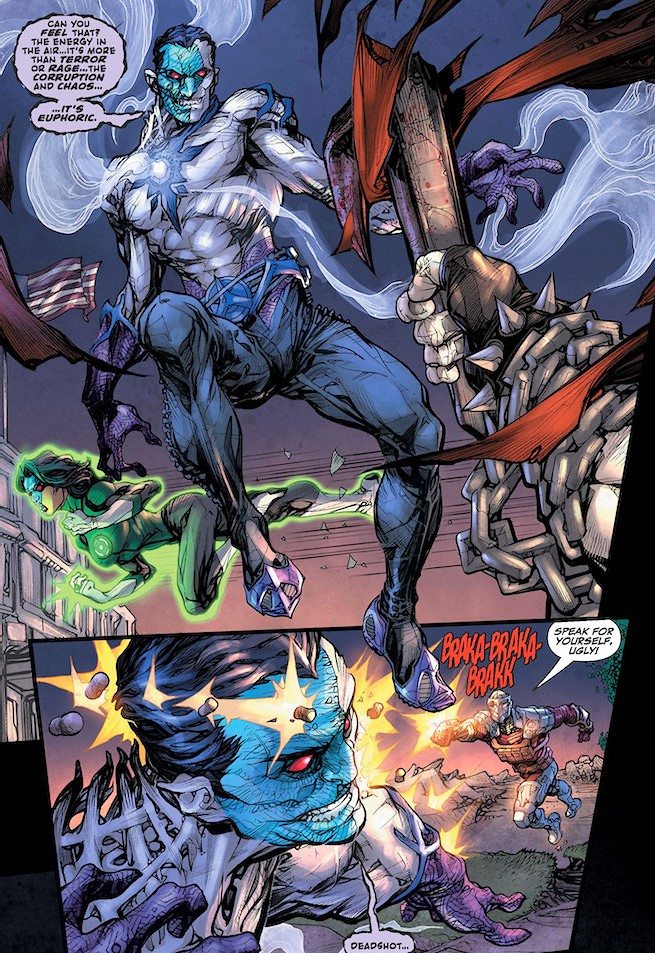 This last issue also offers art that feels too cartoonish at times, but nonetheless manages to catch your attention. Artist Howard Porter portrays facial expressions very well; his depiction of the possessed members of the League is arguably the best out of all the issues and of the artists who have worked on this series. What takes away from the art, however, are the panels containing the showdown between the heroes. Some panels look messy because they try to include too many characters. In one panel we see Batman and Killer Frost helping Lobo, while in the background we see Eclipso waltzing with Amanda, and Superman awkwardly flying away. This just feels too comical and reduces the gravitas of the situation.

The MVP for this issue is colorist Alex Sinclair. Sinclair’s colors are clean and provide a beautiful contrast on the pages between dark and light colors. This perfectly blends with the rise and demise of Eclipso’s wickedness. The result showcases a stunning splash of sunlight, as the darkness soon gives way to the light.

JUSTICE LEAGUE VS. SUICIDE SQUAD #6 proves to be a mixed bag conclusion to an epic crossover event. The story suffers from a lackluster showdown with an underwhelming villain. Although a majority of the characters from the League and the Squad lack captivating moments, Killer Frost and Amanda Waller are fairly well-developed. You may not care much for the villain or the main showdown, but the final issue of the crossover event will still excite you for what’s to come.