There’s only one more issue left to conclude the epic showdown in JUSTICE LEAGUE VS. SUICIDE SQUAD. This second to last issue does well providing new depth to the story and keeping the art more consistent than its previous installments. With a more sinister tone than Maxwell Lord, JUSTICE LEAGUE VS. SUICIDE SQUAD #5 introduces a new villain that emerges from the darkness and chaos. It appears this crossover event is much more than what its title suggests.

READ: If you’re not watching the animated show, JUSTICE LEAGUE ACTION, here’s why you should be!

The issue quickly briefs you on what Maxwell Lord has done with the Justice League now that they’re under his control (thanks to the Eclipso gem). Max truly believes his new world order is righteous, holding the members of the League with specific responsibilities: Wonder Woman is to “protect” the world’s leaders, the Green Lanterns are to put up a barrier to shield Earth from space invaders, and Aquaman is to secure the shorelines. You may think Max’s intention was to keep the earth or the U.S. safe, but his actions reek of fear and control. As we all know, throughout comic book history, the Justice League works together with mankind to solve their many problems. They never, however, intend to rule the people of Earth. This is what distinguishes them from Maxwell Lord. But now under his control, the League follows Maxwell Lord’s vision. And like his namesake, he takes his lordship position in the White House with help from the brainwashed Superman. 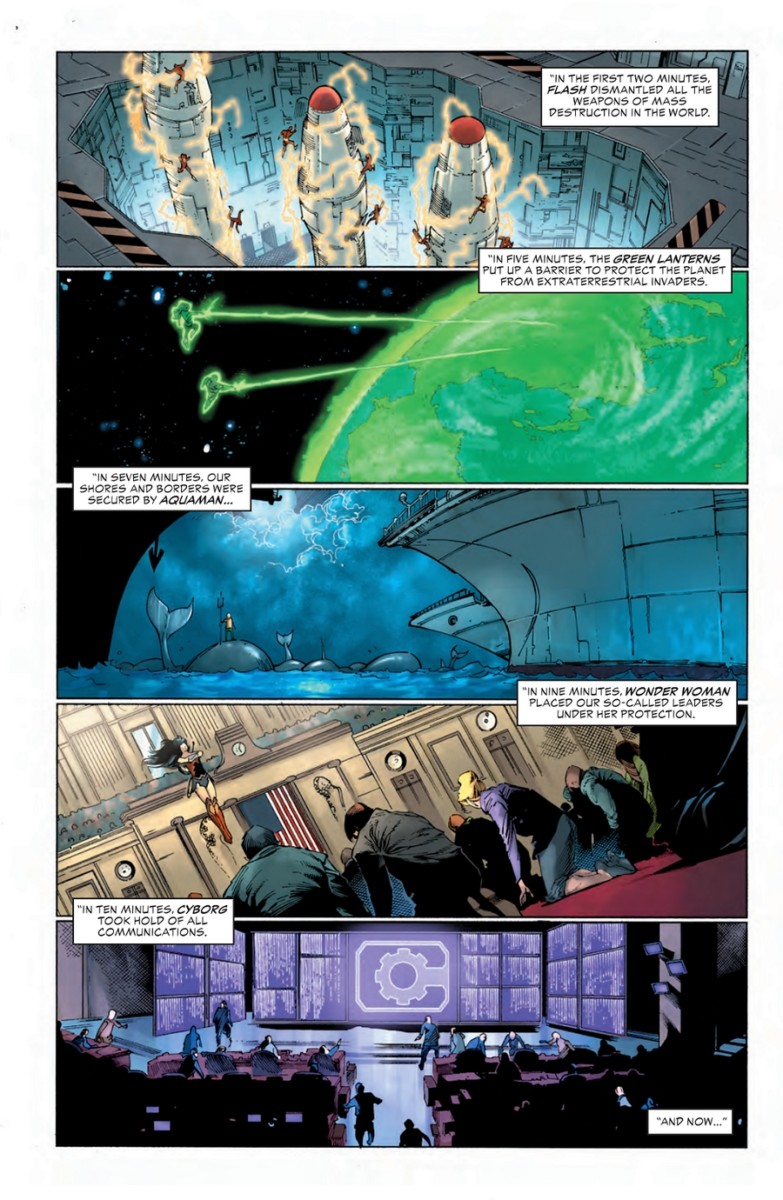 Elsewhere, Batman and members of the old and new Suicide Squads join forces. Their suicide mission involves saving the League and Amanda Waller from Maxwell Lord’s power, but to get to him, they must get through the members of the League. However, Max’s loss of control of the mysterious mind-controlling crystal awakens a new threat that the heroes and villains were not anticipating. With the major event to conclude in the next issue, a serious amount of ass-kicking is on the horizon. All this buildup with action and a new threat is sure to leave you excited, if not worried.

Writer Joshua Williamson makes a strong impression with his characters, specifically the interchanges between Batman and members of the Suicide Squad. It’s funny to see the Squad members get pissed off since Max hasn’t chosen them as his personal messengers. Instead, Maxwell Lord only chooses to control the mighty members of the Justice League to establish his new world reign, even leaving out Batman who has no superpowers (unless you count money). The Squad members feel left out, and this tension is entertaining to read as it further develops the characters and gives them a reason to join forces with Batman.

However, what’s worrisome is the introduction of this new threat. With one more issue to go, the conclusion will have to cram in a battle with the brainwashed Justice League members and this new villain, while maintaining all major character’s presence in the pages. With the focus now away from an established villain like Max Lord, Williamson has a responsibility to make this new villain just as interesting while delivering a conclusion that’ll do justice to the members of the Squad, the League, and the series. 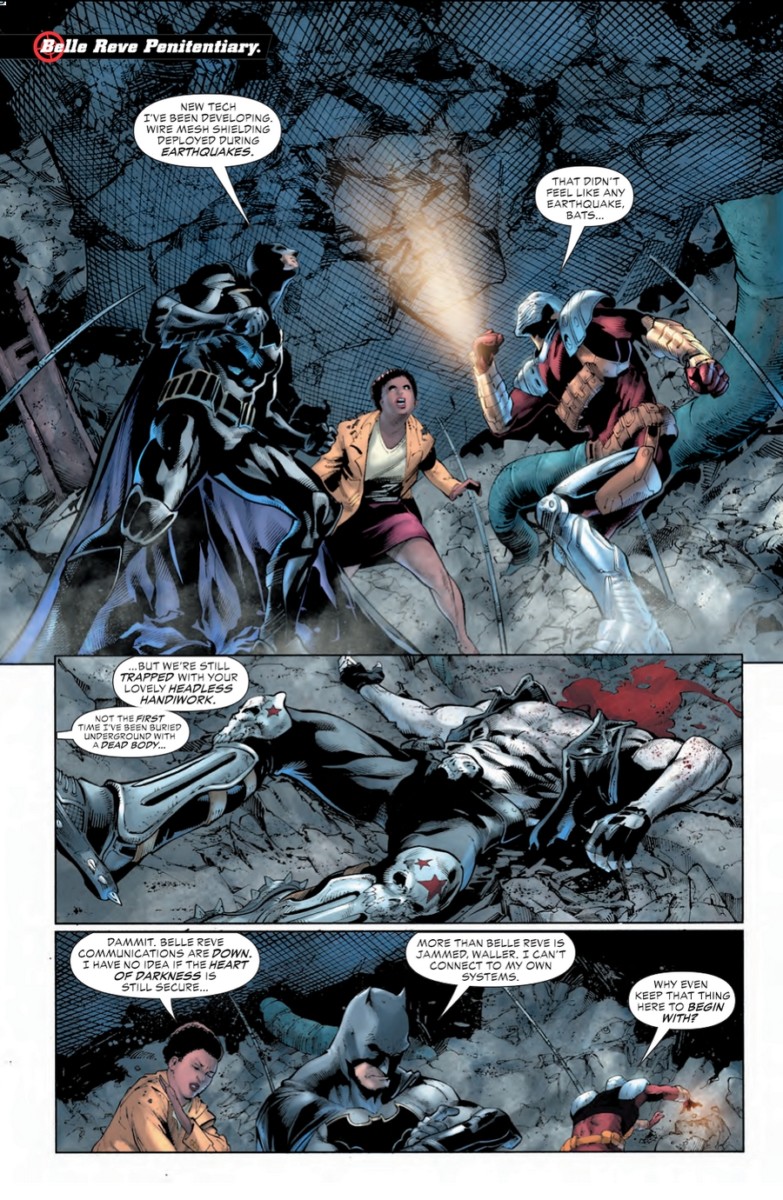 While the art had its ups and downs in the previous issues, here artist Robson Rocha succeeds in portraying meaningful close-ups of characters and their facial expressions. The lack of emotion on Superman’s face as he throws Batman through the rubble without any regard is particularly noteworthy. Colorist Alex Sinclair shines with his choice of background colors that differentiate the settings of characters. Panels that contain Batman and the Squad have a blue outline mixed with gray. This puts an emphasis of a dark night, surrounded by rubble and concrete in the background. When the panels switch back to Maxwell Lord’s narrative, there’s a hint of purple that looms from his mind gem/crystal. This further creates a mood in the background for each panel, making the characters more lively. What’s left to be desired, however, is the depiction of Maxwell Lord and the League’s brainwashed faces. They look like they’re suffering from some sort of lizard skin condition on one side of their face, rather than what’s intended.

With all that being said, JUSTICE LEAGUE VS. SUICIDE SQUAD #5 successfully sets up an epic conclusion to the series. With Batman leading the Suicide Squad to stop the League, they must also face the darkness that’s behind it all. It’ll be interesting to see how this new league of rejects will defeat the unstoppable and immovable. Get pumped!