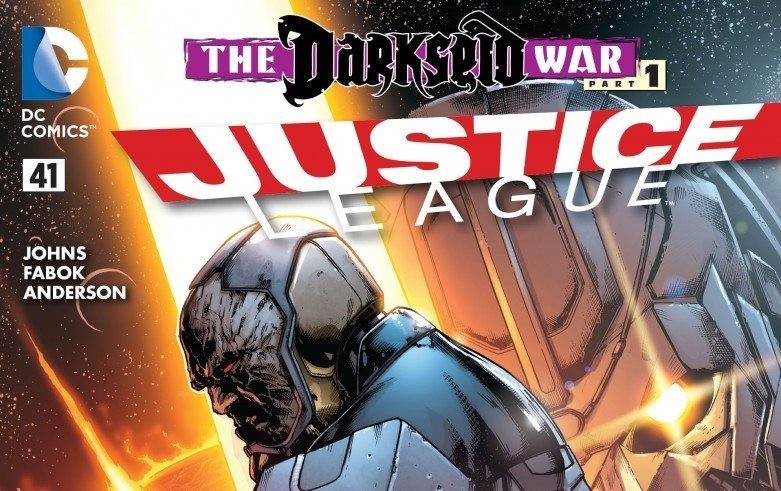 It must be truly terrible to live in superhero universes. For the past several years, there have been publisher-wide events at least once a year sometimes more. The cynic in me would say that this is a shrewd ploy to promote titles and bump a publisher’s year-end profits up a few notches. The easily amused child in me, though, likes seeing how ridiculously high the stakes can go during each event until it even seems implausible in a world of spandex-clad heroes and villains. Thus, I keep reading them.

Here’s the skinny on JUSTICE LEAGUE VOLUME 7: it’s all event. It’s big booms, face punches, and laser eyes; the whole noodle caboodle. Is it bad? Thankfully, no. The DC Universe is turned on its head once again, Darkseid and the Anti-Monitor are going to war with one another. It sounds desperate in a “what else can we do?” kind of way, but it actually works pretty well. Geoff Johns writes such a tight, compelling Godzilla vs. Mothra story that you forget the supreme absurdity of the concept and just enjoy the ride. JUSTICE LEAGUE VOLUME 7 is a true summer blockbuster, and like any tentpole summer blockbuster, it’s a fun confection even if it is lacking some of the narrative density to make it resonate. 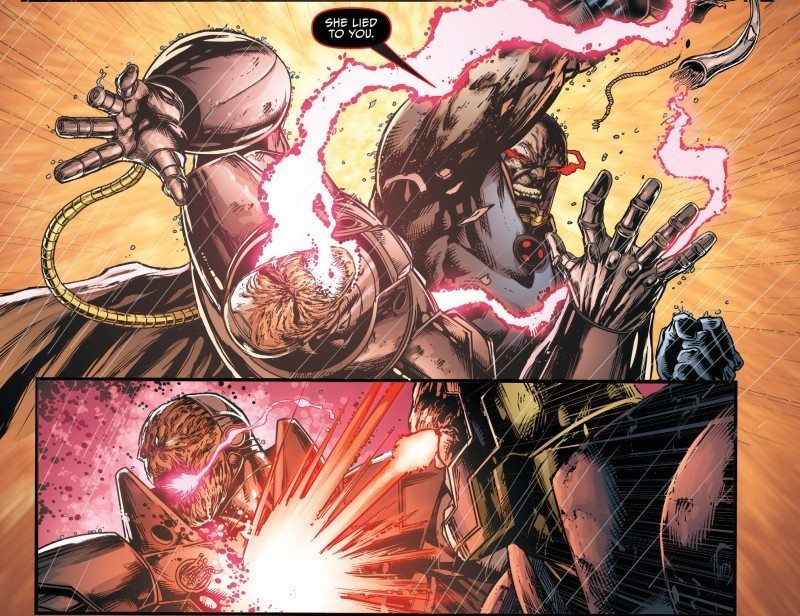 READ: Keep up with The Darkseid War’s one-off Flash cross-over

First, the good stuff. The writing of the story is great. If you’re like me and you’ve been missing some great, high-level action stories from JUSTICE LEAGUE, Geoff Johns turns in a great first part here. The scope of the entire thing feels enormous and not just because we’re dealing with two of the biggest titans of the DC Universe. The prologue is a clear standout and does a fantastic job establishing how this fits into the DC canon. It recalls all the crises that have happened in the DC multiverse stretching back to CRISIS ON INFINITE EARTHS which only benefits the story by providing it with a truly epic palette to paint itself onto.

It is interesting to see how the many corners of the DC Universe fit into this story. One of the problems with DC’s Convergence event was how it tried to fit everything and everyone together. This story has similar ambitions, except that rather than making all of DC’s history physically present in the story, Darkseid War simply uses it for context. The New Gods and Apokolips are referenced, as are the Amazons, and the Crime Syndicate. The difference this time around, though, is that they don’t muddle the plot the same way Convergence’s use did. 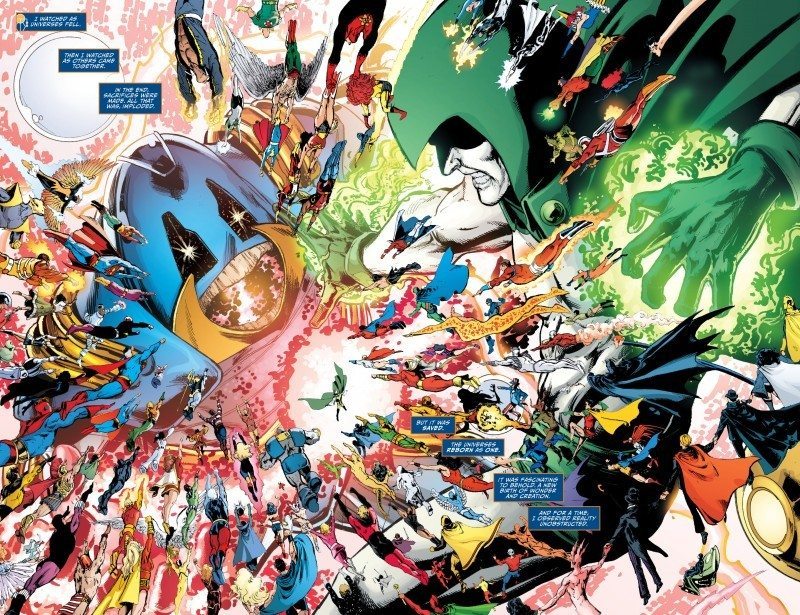 The art’s great as well, I can’t forget that. Jason Fabok has done a superb job with the illustrating and it marries well with Johns’ writing to add a real cinematic quality to this book. There are expansive wide shots, intimate close shots, and everything in between. Fabok has a great feel for what a particular scene is calling for and its the art that really sets this book above some of the other JUSTICE LEAGUE stories since 2011.

READ: Not loving this Justice League? Give this Alternate Universe title a read

Now for the not-so-good. At times, what works well in other parts makes the book fall short in others. For example, in the prologue, having it narrated first person via Metron works because he is an omnipotent character that exists outside of linear time. As such, having him provide narration lets us know how big and important this story is. However, this technique doesn’t work very well when Wonder Woman is the narrator intermittently throughout. I firmly stand by my opinion that Geoff Johns does not write a very good Wonder Woman. She’s never shown to be all that caring or compassionate, and she really loves reaching for her sword and getting her fists through someone’s head (or threatening to, at least). However, even if she was well-written, having battles and other moments narrated by her feels clunky and unneccesary. 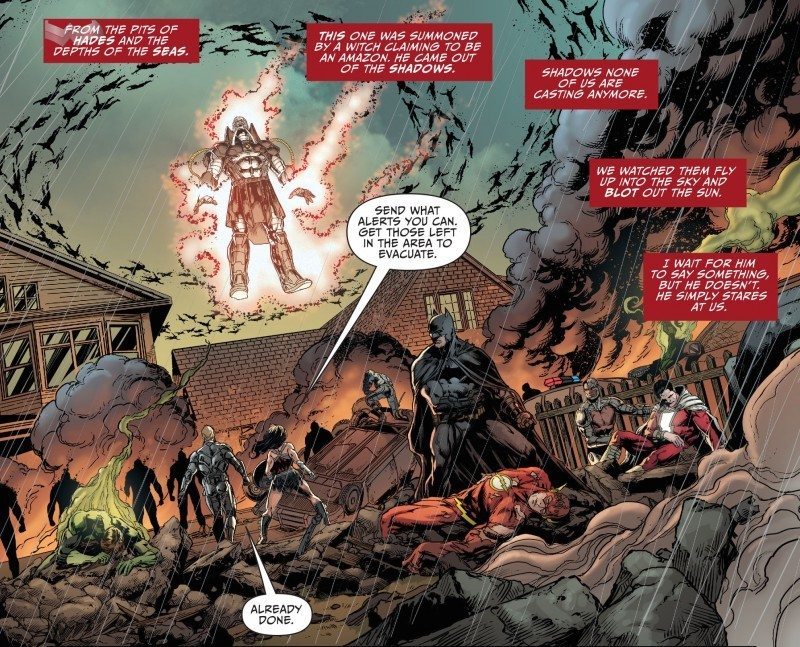 What may have been more effective was keeping Metron in the background as the observer he claims to be and then having him provide narration. That would give a little more of a KINGDOM COME element to this story and elevate the scale that much more. That, or scrap additional narration altogether as it isn’t essential to the story.

Another thing that may have only bugged me was the re-design of Anti-Monitor. The big guy (being?) literally eats worlds. How on Earth Prime is Darkseid able to go toe to toe with him when Darkseid is usually depicted as about physically equal to Superman? Not to cheapen Darkseid, but if you’re going to have such an insanely powerful character like the Anti-Monitor, there needs to be an out of this world reason to have them able to fight one another. These kinds of characters don’t just go into battle willy nilly when they’re busy consuming reality like it’s dollar discount hour at your local buffet. Like I said, it’s a bit of a popcorn flick. It’s entertaining as hell, but some of the internal logic is whack.

READ: What happens next? Find out in our review of JUSTICE LEAGUE #45-47 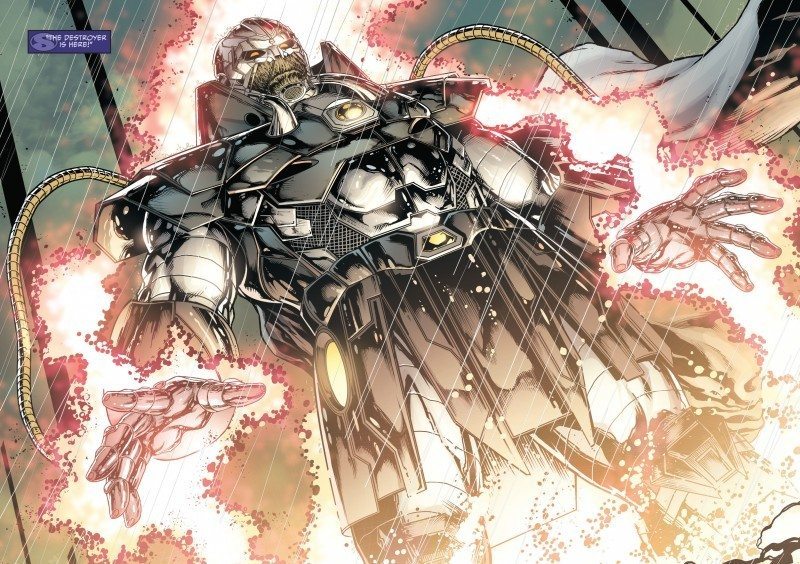 I’m going to raise one final grievance and that’s with DC. The way this book ends feels strange. Rather than leave it a cliff-hanger of an ending, it would probably have been more effective for them to wait until the second part of The Darseid War and release one larger trade (like you know they will). Oh well, money talks. The thing is, it isn’t that cliffhangers are bad, but that by the time this book has been published, the follow-up issues are already hitting shelves so the cliff-hanger ending feels cheap and abrupt. That goes without mentioning that I don’t think the story is engrossing enough on its own to really warrant a cliff-hanger. The appeal of this book is in its antics, not its narrative finesse.

All things considered, JUSTICE LEAGUE VOLUME 7 is a fun read. It’s leagues (laugh with me) better than some of the other things coming out of DC right now and even without that modifier it is a great book. Despite some wonky logic here and there, this book maintains the idea that sometimes all you need is an overblown kaiju fight to get readers’ attention. If the DC and Marvel Universes are to be continuously cosmically imperiled, let this be the way they do it.