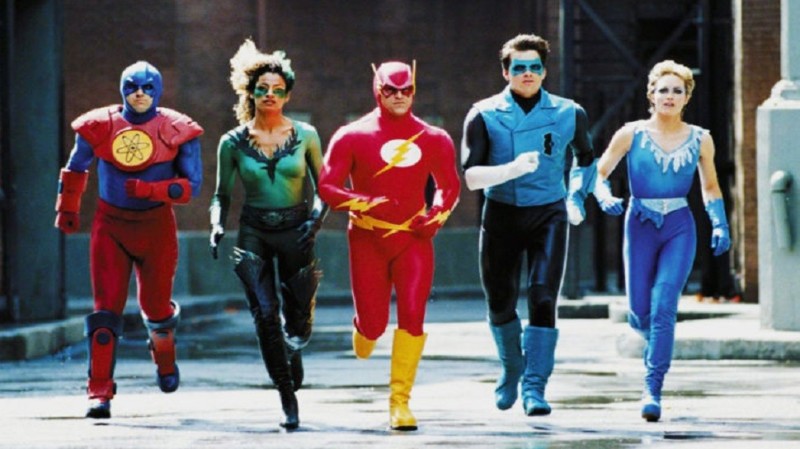 From Left to Right: The Atom, Fire, The Flash, Green Lantern & Ice

With the much-anticipated Justice League film right around the corner, has anyone wondered why it’s taken so long for “Earth’s Final Defense” to make their live-action debut? Well, not only did Warner Bros. attempt a live action version of a Justice League series but that Justice League pilot never aired in the United States! This unaired pilot is one of the most elusive pieces of comic book media since the 1994 Fantastic Four film, and for good reason.  It was DC’s first attempt at live action Justice League, let alone a Justice League pilot and boy, was it bad. It’s hard to tell what it’s redeeming qualities are, but very easy to spot where they went wrong.

To spot it all, however, we are going to have to go back in time. We must go back before The Dark Knight Trilogy redefined what we know as the comic book movie. We must go back before the creation of The Marvel Cinematic Universe changed continuity as we know it. Even before the success of SMALLVILLE, or the ARROWVERSE, or the juggernaut that is Marvel on Netflix. The year is 1997. The films BATMAN & ROBIN and STEEL were set to take the world by storm, and DC/ Warner Bros was spending all their money and effort to get their characters on film & TV. It was in that year that CBS created the Justice League of America as a pilot, hoping it would become a huge success. How can a show with some of the most legendary comic book heroes ever created fail? Turns out it can.

The Justice League pilot itself centers around a female meteorologist named Tori who works for Eno Meteorological Institute. When the city of New Metro is held for ransom by a terrorist armed with a weather control device, it’s up to Tori to deduce who the masked man could be. The terrorist calling himself “The Weatherman” threatens to destroy New Metro if he doesn’t receive $20 million in cash. At the start, The Justice League of America is only five members strong, and this mystery seems too much for the crime-fighters. It is only with the help of Tori, later given the alias of “Ice,” that they manage to subdue the Weatherman and save New Metro. With a new member in their ranks, The Justice League was seemingly ready to take on all comers — had the show been picked up.

Unlike traditional lineups for the JLA, this one has some major omissions. This Justice League has no Batman or Aquaman. It is missing Wonder Woman and everyone’s favorite Big Blue Boy-Scout Superman. In place of the common Justice League line-up is The Flash/Barry Allen, The Green Lantern/Guy Gardener (Matthew Settle), The Atom/Ray Palmer, Fire/B.B. DaCosta, the lead Ice/Tori and even a surprise appearance from a slightly heavier J’onn J’onnz/Martian Manhunter. They convene in an underwater headquarters and fight crime for the citizens of New Metro and citizens around America.

The lead, Kimberly Oja, plays Tori Olafsdotter aka Ice. Ice is the newest member of the Justice League after just receiving her powers in a science accident. Her character was inspired by a DC Comics superhero created in 1988 (although in the comics Tori is named Tora). The actress herself is tolerable at best, playing the girl-next-door type. She is the “audience surrogate” or character who expresses the questions and confusion of the audience. Her origin is at the forefront of this story and she moves the plot along nicely. Sure, she is timid and says the wrong things at the wrong time, but ultimately she is relatable. In a world already full of crazy caped-crusaders, Tori is answering the call to save the citizens of New Metro.

WATCH: Ice accepts her invitation to the Justice League

To even out Ice, Michelle Hurd plays B.B. DaCosta, who is better known as Fire. I guess opposites do attract? Admittedly, I had never heard of Fire before, and her green costume confused me (Isn’t Guy already Green? What about the color green = Fire?), but the actress is fun and energetic. Those who have seen Daredevil or Jessica Jones may recognize Hurd as D.A. Reyes of Marvel Netflix fame. She is playful and has great banter with ex-boyfriend Guy Gardener aka The Green Lantern. The women are fun in this Justice League pilot, even if they are often shown as just love interests for other members.

Next, we have Barry Allen played by Kenneth Johnston. Gone is the blonde hair and Central City background. This Barry isn’t the analytical yet lovable forensic scientist, hell-bent on solving crimes. This Barry starts the series unemployed and has no place to stay. He plays the goofball jock roommate role, which is almost the exact opposite of his comic persona. At one point, he states that as a speedster he has the most useless power of all, so you can see how much they valued The Flash. He is definitely more Ninja Turtle than Scarlet Speedster. This was a disappointing representation of the normally level-headed and driven Barry Allen from the comics.

READ: Check out our review for THE FLASH “I Know Who You Are”

We also have Ray Palmer/The Atom played by John Kassir. Kassir plays Ray as an awkward and nerdy science teacher who has a crush on Tori. They flirt throughout the pilot and play with the “nice guys finish last” trope for laughs, as Tori struggles to find another word to describe Ray other than “nice.” Although comic book Ray Palmer never wore glasses, suspenders or a bow-tie, his TV version does get some laughs.  Their relationship is a cute hook that would have played well with the 90’s sitcom crowd, but Ray is more caricature than character in this pilot. It felt like turning Ray into the classic bumbling genius really cut the legs out from underneath him.  In any given comic, Ray Palmer is a respected leader, mentor, and teammate. Here he is used as a supporting character for Tori, and awkward comic relief which is a shame.

Matthew Settle plays the hip and cool member of this Justice League pilot. As Guy Gardener/Green Lantern he is a ladies man, starting off this show trying to save his relationship. Unlike other lanterns, Gardener doesn’t seem too burdened by his powers. This version of Guy is the calm and collected teammate with a smart mouth. Guy even has a complicated past with teammate “Fire,” as the two used to date. His woman troubles aside he is a valued member of this Justice League. It’s odd that they didn’t choose to use much more prominent Lanterns like Hal Jordan or John Stewart. Maybe they wanted to see someone rock that sweet sleeveless jacket? The Green Lantern Corp themselves are never mentioned.

READ: Fan of the Green Lantern? Check out THESE essential Lantern stories!

Lastly,  David Odgen Stiers plays Martian Manhunter. There isn’t much to say about this incarnation other than it looks like J’onn packed some pounds since his last time on Earth. I am no bodybuilder, but it’s hard not to see the Martian’s stomach stick out past his cape. This version of J’onn J’onnz came to earth, not as a refugee, but lives here because he like the things about Earth that humans take for granted. Instead of leading this team with his stoic poise and myriad of abilities J’onn acts as an authority figure mostly. He stays inside the Justice League HQ while the action happens and never seems to leave. With this team missing the Trinity (Wonder Woman, Batman & Superman), having J’onn play a more active part could have been exactly what this Justice League pilot needed.

This was a classic case of the writers/directors not taking the source material serious enough. SPAWN was also released in 1997 and made double its budget upon release. Where SPAWN soars to meet its source material by adding special effects and haunting imagery, the Justice League pilot cuts corners and offers a sub-par attempt at the most famous team in comics. What’s worse is it isn’t even the whole team. Choosing not to add Batman, Wonder Woman or even Superman was maddening, to say the least, but poor characterization is the bane of this show. The characters are two-dimensional and unfunny. Even the ones we should be relating to most seem like cardboard cut-outs of old sitcom characters.

I know it’s easy to look back in hindsight and point out the flaws, but this isn’t just revisionist history.  The costumes were cheap even for the 1990’s standard, and the special effects were cringe-worthy. The “powers” were also lackluster even if they were on a budget. Sure, they managed some laughs, but they are few and far apart. These aren’t the heroes I remember. The Justice League is a pillar of hope, a beacon of light shining through the darkness that can be DC Comics. They aren’t just some fodder to be thrown around when you need to pitch a new TV show. The choice to veer so sharply from the team’s source material ultimately destroyed this show’s chances. Studios everywhere would soon learn this lesson the hard way, and some are still learning to this day.

When all is said and done, 1997 will always be the year DC/WB failed their audience by choosing to steer away from the tried and true characters and plots of their comics.  They should have been able to capitalize on a growing market that would only get bigger with the releases of X-MEN and BLADE. Instead, they choose to make a superhero version of Friends.  By doing so, they ensured that not only would they never see a return on this uninspired investment, but that this Justice League pilot never sees the light of day.

By the looks of it, the JUSTICE LEAGUE film already has everything this pilot doesn’t. It has genuine laughs, pulse-pounding action, and all of our favorite members are front and center (Sorry Atom). The outfits in the new film look sleek and well designed, and the special effects look state of the art. In the end, the new film may be the Justice League we needed in 1997, but maybe it wasn’t the one we deserved at the time.