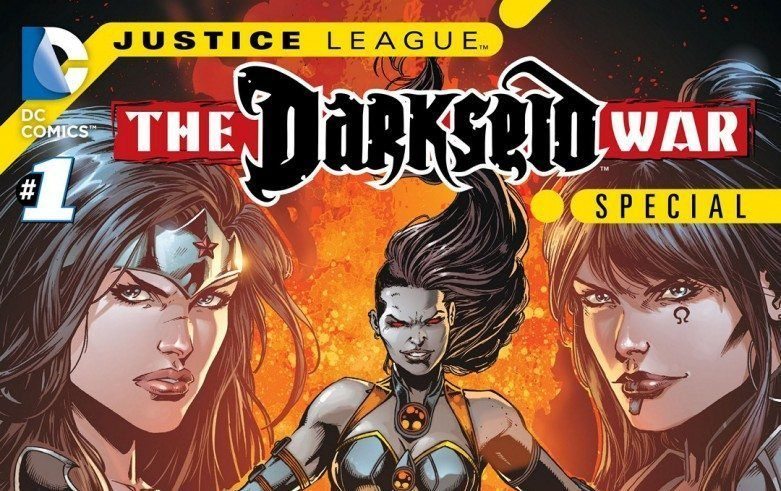 The JUSTICE LEAGUE WAR DARKSEID SPECIAL is a canon spinoff like the other specials of the main Justice League comic. What makes this issue so special is that it tells the origins of Grail, the daughter of the Amazon Myrina, and the ruler of Apokalypse Darkseid. We also learn about what happened to Power Ring (Jessica Cruz) when she lost control over her ring, the ring of Volthoom.

It was already established earlier on in the Darkseid War saga that Grail was born the same day as princess Diana, better known as Wonder Woman. What this comic reveals is that Grail wasn’t always as evil as her father. In fact, she was similar to how Superman was when he was a boy. Grail was scared, didn’t know how to control her powers, and kept killing everyone. The difference between Grail and Superman though is that Superman never killed anyone as a child nor never intended to, whereas Grail felt joy at the site of her victims’ demise. Myrina, who was one of the Amazon’s greatest assassins, had begun training Grail at a very young age so that she could keep the darkness at bay; that very same darkness which created Darkseid. This was not the only reason why Myrina trained her; it was also to exact her revenge on Darkseid for all of the evil that he had done. Unfortunately, Grail would wind up becoming just as evil as her father, perhaps even more so when she teamed up with the Anti-Monitor to kill him. 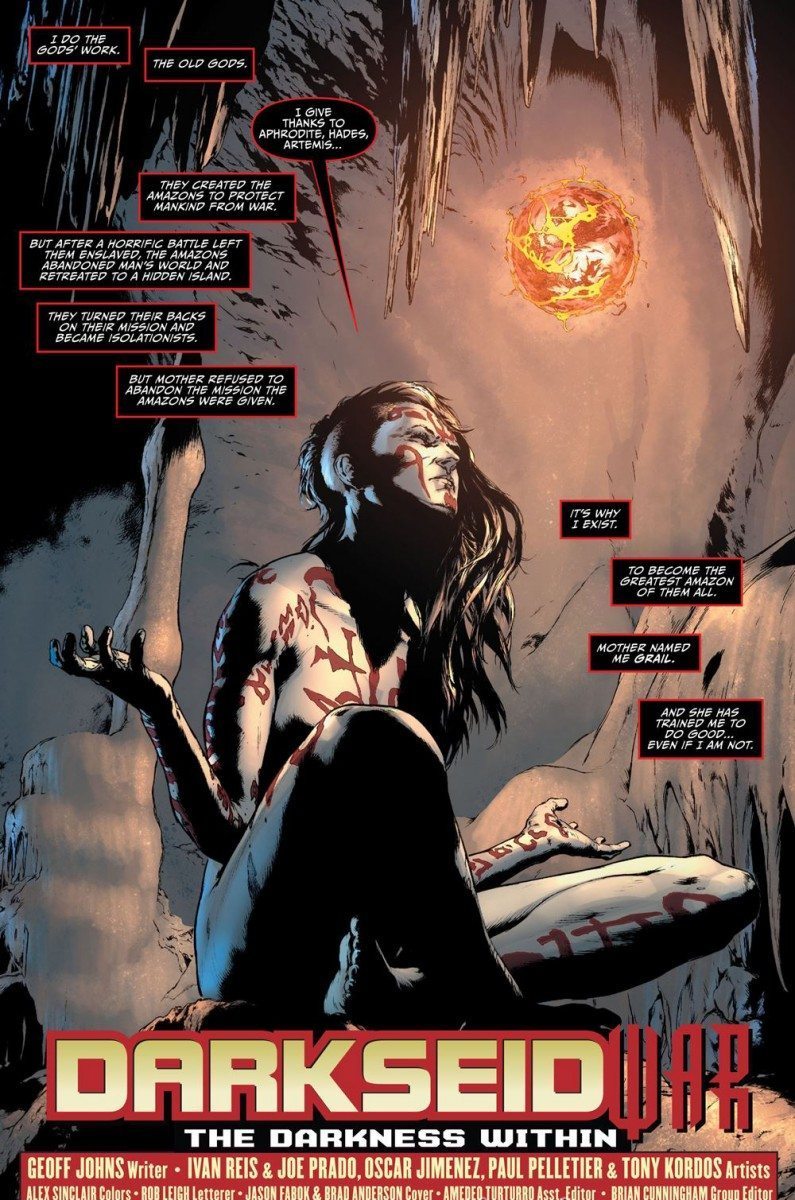 Power Ring, as I mentioned earlier, was also brought up in this issue. We learn that she’s been trapped within the ring of Volthoom with all of the souls who’ve previously worn the ring. The difference between her and the others is that she hears a voice in her head that’s trying to guide her out. Who does this voice belong to? A former wearer of the ring of Volthoom? Or could it be a trap? What I can tell you is that if you read this issue, then you’ll be in for a shock.

READ: Looking to catch up on JUSTICE LEAGUE: THE DARKSEID WAR? Then look no further, we’ve got it for you right here!

Most members of the Justice League have gotten a one-shot special issue spawning from the Darkseid War arc. I’ve read all of them and honestly haven’t been too impressed with them. But this one takes the cake, and I believe it’s because writer Geoff Johns is on it. I give Johns’ writing a 5 out of 5 because of what a phenomenal writer he is. I could feel such heart being put into Grail’s character when reading through her origin. Only someone as passionate as Johns could do that. At one point, he even had me feeling bad for the cold hearted when Grail was talking about her childhood and how she would always kill the people that tried helping her and her mother. She was afraid; she didn’t want to do it, it just happened. The worst part of it all was that she felt a sense of joy when killing someone, even though she didn’t want to feel that way. Some other books that Johns has written that have a great story line include the first volume of the New 52’s AQUAMAN, BATMAN: EARTH ONE, THE JUSTICE LEAGUE and plenty more. His writing breathes life into new and old characters making them refreshing for the readers.

READ: Take a look at some of the other JUSTICE LEAGUE: DARKSEID WAR one-shots!

I give a lot of credit to the artists that worked on this book, who also get 5 stars, which is quite a few. We have Ivan Reis, Joe Prado, Oscar Jimenez, Paul Pelletier, Tony Kordos and Alex Sinclair. That’s six artists! A book like THE JUSTICE LEAGUE definitely deserves that many. This group illustrates a dark origin for such a vile being that only pictures could describe, and these pictures tell it all. The graphic scenes from where Grail, as a toddler, vaporizes an army of soldiers with her omega beams, to where she tortures Steve Trevor in her cave, are truly remarkable. Even the detail on their clothing, the littlest things like wrinkles, buttons and zippers are a treat to see. But with a lot of artists on just one book, it must also be difficult to compromise on what should be drawn. Each artist must be able to communicate with one another (since I highly doubt that they were all in the same room when drawing this) to go over each panel thoroughly to make sure what is going to be presented. Again, I give these guys a lot of credit. A lot of people don’t realize what goes in to the art of a comic book. It takes an insurmountable allotment of time to do the pencils, inks and colors all so that we may look at it only for a few seconds and move on to the next panel. Next time you’re reading a comic, take the time to look over the art. Look at every little detail to see what makes up that panel. I’m sure the artists will appreciate it. 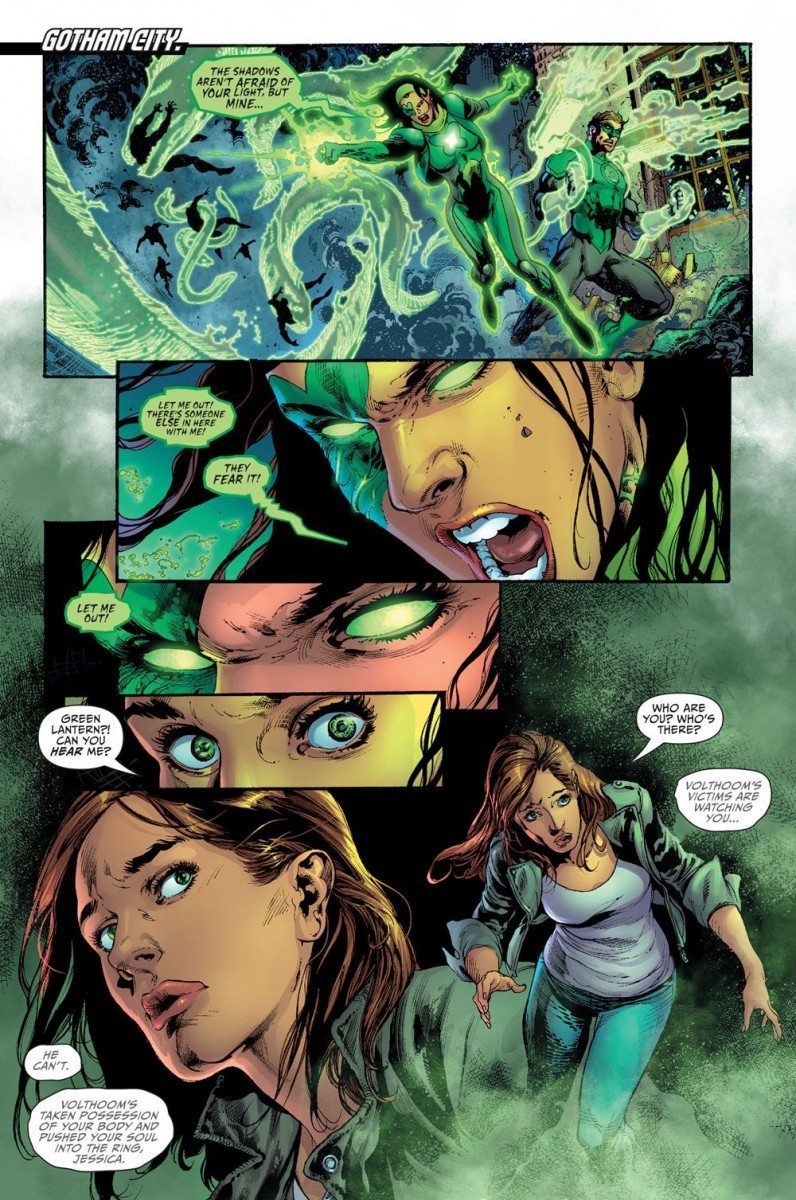 A question that I and I’m sure tons of other fans would like to know is: Why did Myrina have Darkseid’s child? Was she forced against her will? Did she fall in love with him at some point? Hopefully, the end of the Darkseid War saga will answer this. Tell us what you think in the comments below!