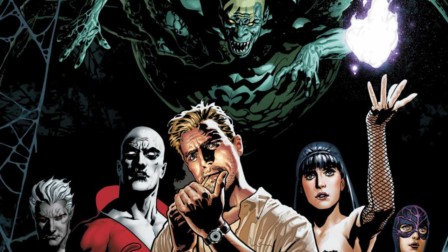 JUSTICE LEAGUE DARK, not to be confused with the live-action JUSTICE LEAGUE, has just dropped its first trailer. The highly anticipated animated feature will release sometime within Spring 2017. Since Warner Bros. announcement back in July 2016, fans have been eagerly awaiting DC’s segue into the supernatural. For those unaware, Justice League Dark is a sect of the Justice League that specializes within the paranormal realm. Confirmed members of the team include Zatanna (Camilla Luddington), Deadman (Nicholas Turturro), Swamp Thing (Roger R. Cross), Etrigan the Demon (Ray Chase), and of course John Constantine (Matt Ryan). JUSTICE LEAGUE DARK marks the 27th DC Animated Movie, and the second R-Rated film. In the wake of the controversial BATMAN: THE KILLING JOKE, JUSTICE LEAGUE DARK promises to be a notable entry in the DC Animated Universe.

The film marks a divergence from the typical Justice League films. Beyond the fact that new characters are introduced, these characters have an unexplored scope of capabilites and powers we have not seen before. They are not Justice League per se, but rather a branch that deals with forces beyond the League’s capabilities. Despite this, the film does showcase several staple Justice League figures. Jason O’Mara is returning to the DC Animated Universe as Batman, along with Jerry O’Connell as Superman, Roger Cross as Green Lantern, and Rosario Dawson as Wonder Woman. Based on the response to the footage released at NYCC 2016,  the Justice League must adapt to newly discovered threats that exist beyond their sphere of understanding. They must now come to terms and develop the proper defense mechanisms against such forces. Thus, the foundation of the Justice League Dark, a prime opportunity to introduce characters we may not be familiar with and explore the realm of mysticism.

READ: John Constantine: From Hell and Back Again on the Screen

Fans may already be familiar with Matt Ryan’s John Constantine, a widely acclaimed character across multiple platforms. Ryan had a brief stint as Constantine in the NBC series CONSTANTINE, plus an episode on ARROW. Although the show did not last, Ryan’s impression did. His adaption of the much beloved character was widely praised among fans for he perfectly matched the attitude, look and persona of Constantine. Consequently, to see him play the character once more fulfills the will of many fans who were craving more Constantine.

The film is directed by Jay Olivia, a veteran animation director whose credits include BATMAN: THE DARK KNIGHT RETURNS, JUSTICE LEAGUE: FLASHPOINT PARADOX, BATMAN: ASSAULT ON ARKHAM, and YOUNG JUSTICE. The film is based off of JUSTICE LEAGUE DARK by Peter Milligan and promises to be just as engrossing and visually stunning. The trailer alone introduces the kind of imagery and gore that seems to follow John Constantine wherever he goes, thus justifying an R-Rating. In light of the controversy that surrounded BATMAN: THE KILLING JOKE, JUSTICE LEAGUE DARK presents the perfect opportunity to rejuvenate the DCAU. JUSTICE LEAGUE DARK is the opportune platform to illustrate that an R rating  does not equate divisiveness and controversy. That a higher rating can be used as an appropriate avenue to deliver on an amazing story and in-depth characters. The DC Universe Animated Original Movies always warrant attention for their experimentation of the more precarious characters and plot. With JUSTICE LEAGUE DARK, there is potential to expand the DCAU beyond the typical Batman and JLA flair. It can even serve as a testing ground for what is to come and what it is that fans would like to see, both in the DCAU and the DC Extended Universe. With a live action Justice League Dark coming soon, all eyes will be on the animated feature to see how well it will fare. With the upcoming JUSTICE LEAGUE DARK we are given an opportunity to explore new kinds of conflict and what they entail as well as an opportunity to divulge into new territory. Armed with nothing but potential, JUSTICE LEAGUE DARK is definitely one of the more highly anticipated films amongst fans.

READ: Five Reasons You Should Watch Young Justice (On Netflix) 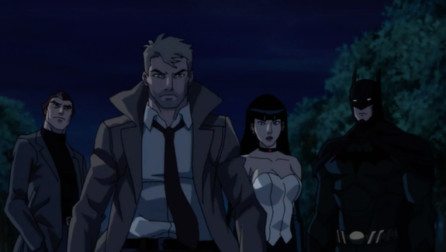