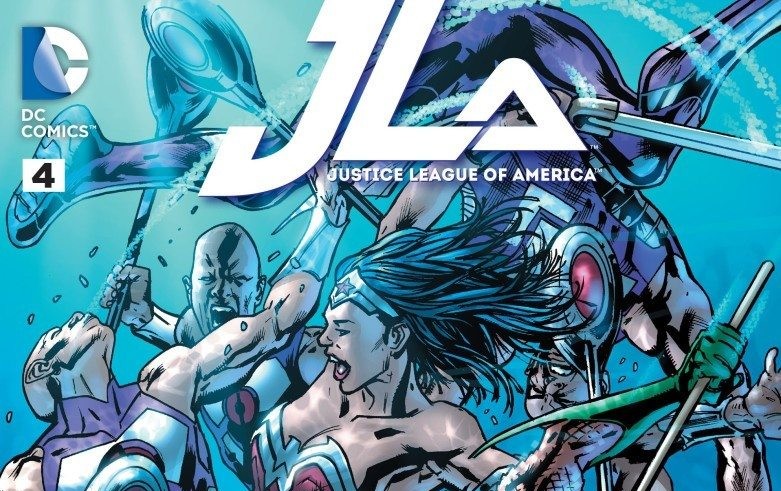 Rao’s light is blinding, but Superman is slowly beginning to see the truth…

Superman’s implicit trust of Batman leads him to do some digging into Rao. What he, Batman, and Cyborg find out have deep ramifications for Earth’s relationship with its new savior, but what will Rao have to say about it?

“If you don’t find Rao, then be assured he will find you.”

What was implied last issue is brought front and center in JUSTICE LEAGUE OF AMERICA #4. Batman’s suspicions are confirmed, and Superman and Cyborg are right there with him, trying to get to the bottom of it. This is, of course, the logical turn of events, but the way in which it unfolds is never predictable or boring. Bryan Hitch’s writing continues to overpower his art, but his pencils remain consistent, even if still a little odd (those noses!). Alex Sinclair’s colors are again outstanding–basically, nothing has changed artistically from last issue to this one, but their effect has changed. Because of the pivot in the story, what we’re looking at takes on a whole new light.

READ: CATCH UP ON OUR JUSTICE LEAGUE OF AMERICA COVERAGE!

As I’ve mentioned before, Rao was suspicious from the first moment he appeared–but that’s only founded in his appearance, and the fact that, well, this is a comic book and drama has to unfold somehow, and he’s the new character introduced, so it has to be caused by him. The point being: Rao never really gave anyone within the story reason to be suspicious, nor was the reader given any reason to be. Superman, beacon of truth and justice, believes in Rao, and Batman, cynical and dark and doubting… was cynical and doubting. So far so good.

When last issue ended with Superman doubting Batman’s doubts, this issue begins with Superman already doubting Rao. That one implicit pivot in point of view casts the issue and the plot in an entirely new light. It’s an interesting little narrative trick that works subtly, but wholly effectively. The reader knows something is up–or something will be up–and since the doubt was named last issue, and Superman, whom we already trust (after, y’know, 75+ years) expresses doubt, we don’t doubt him and just run with it.

Now the score is: Superman, Batman, and Cyborg doubt Rao, while Green Lantern is in the past exploring an ominous mystery that is clearly linked to the proceedings (otherwise why would it be happening). The Justice League’s de facto leader (Superman) and arguably its lead investigators (Batman, Cyborg) are all trying to get to the bottom of this.  So the next time we see Rao and his prophets and his converts, we’re looking at him out of the side of our eye. When his red glow appears (you almost feel betrayed by Alex Sinclair for making so warm and beautiful a light the symbol of something ultimately so sinister), and his prophets echo his words, and his converts do the same, there’s an eerie, zombie-like quality to everything.

And we haven’t even gotten to the brilliant part yet.

Hitch and his team trust that the reader will be on board at this point, which allows them to shift from the implicit to the explicit: parents forcibly convert their children, a prophet attacks Batman, and things get real.

Again, you knew logically this was going to happen, because you’ve been reading comic books forever–or just reading anything ever for ever, so you know the other shoe has to drop eventually, but it was never clear how. Once it happens, there’s no, “oh snap!” moment, just the moment of, “Yup. I knew it. Now what are we gonna do about it?”

It’s implicitly and subtly exciting, and wholly brilliant. This isn’t an explosive issue, but rather a demonstration of a grasp of narrative that is rare in mainstream comic books and that I completely appreciate.

If you’re looking for something bold and shocking and action-packed, JUSTICE LEAGUE OF AMERICA #4 isn’t for you. If you’re looking, however, for something clever and well-constructed and exciting and thrilling in a subtly satisfying way, then I cannot more highly recommend it. It almost feels as if what happens after this issue are just details that I don’t necessarily need to read, but after this minor stroke of genius, I’m willing to ride out this arc all the way to the end.