Previously in JUSTICE LEAGUE #8, someone hacked the Batcave (along with Batman’s vehicles) and the Watchtower. Cyborg was in the Watchtower at the time and was quickly at the mercy of the hacker as well. While on Earth, the hacker used the Watchtower to summon the rest of the Justice League, only to hack into Simon Baz’s power ring. Under the hacker’s control, the ring assaulted the league with an onslaught of deadly constructs.

Writer Bryan Hitch continues the story with the green constructs attacking the Justice League. Baz tries to gain control over his power ring again, but the hack proves too much for him and the attack rages on. Cyborg is having his own problems with the hacker since the mechanical parts of his body are still not cooperating. The hacker seems insanely powerful, and his or her abilities are beyond that of Cyborg. This feels somewhat too strong for a new villain. The hacker is doing more than any other has been able to do such as breaking through Batman’s cyber security that Cyborg couldn’t get through, shutting down Cyborg, and tapping into a Green Lantern ring to unleash more power than any single lantern has been able to. I understand that it’s difficult to find or create a villain worthy of taking on the greatest heroes the DC Universe has to offer, but a villain capable of disabling Batman, Green Lantern, and Cyborg all at once seems too much. 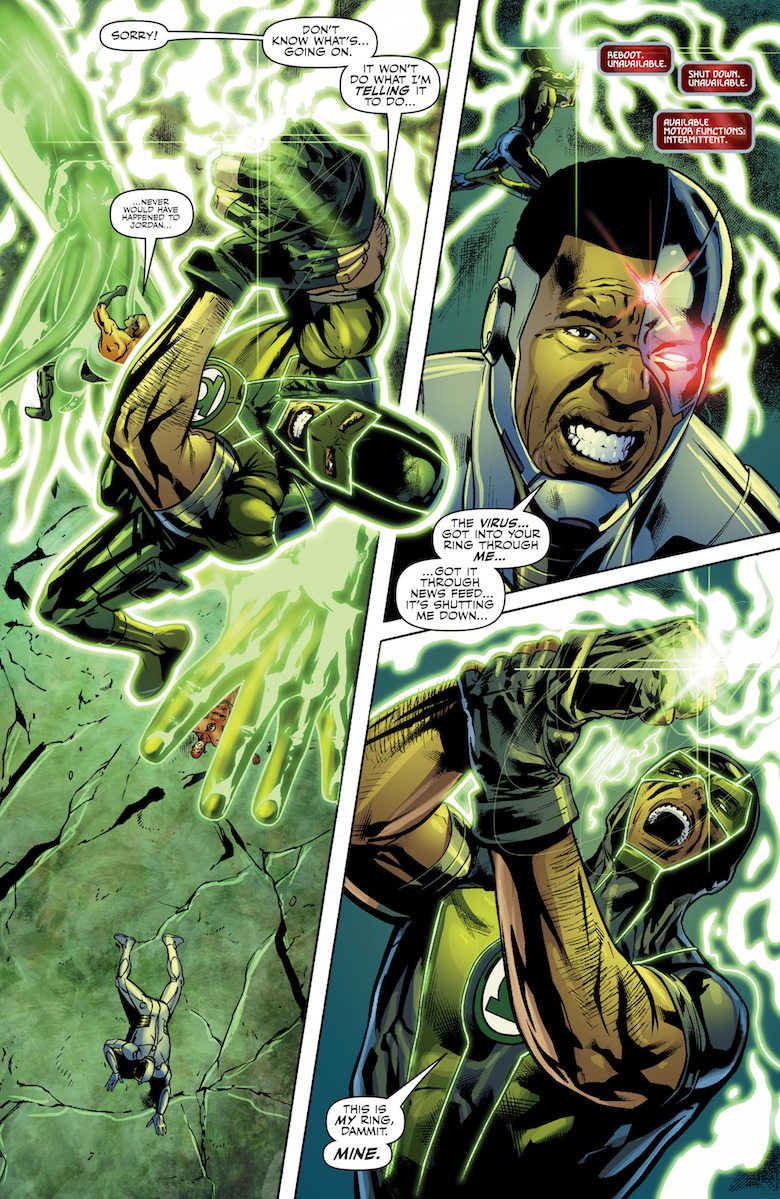 While the Justice League is dealing with Baz’s ring, Batman is trying to figure out who the hacker is. It’s the reasonable thing to do after all of his weapons just attempted to kill him in his own home. Batman will always be the super detective, so it makes sense that he’s the one to find the person responsible for the cyber-attack. I guess he’s the only one with technical savvy since Cyborg is out of commission in JUSTICE LEAGUE #9. Batman believes he’s found an old villain that may be the culprit, but it feels too early for the villain to be so revealed. I suspect more at play here!

READ: What is Simon Baz doing when he’s away from the Justice League? Well he’s in his own series! Check out our latest review of the Green Lanterns!

The art by Daniel Henriques and Neil Edwards is impressive in JUSTICE LEAGUE #9. I will always love the design of constructs created by a power ring. It’s one of the main reasons I like reading the Green Lantern series (just in case you were wondering). Neither Daniel Henriques nor Neil Edwards have worked on a Green Lantern title, but they probably should in the future based on the fantastic work they do in this issue. There are many monsters, sea creatures, and weapons from Baz’s power ring and they are drawn well to present a huge threat for the Justice League. 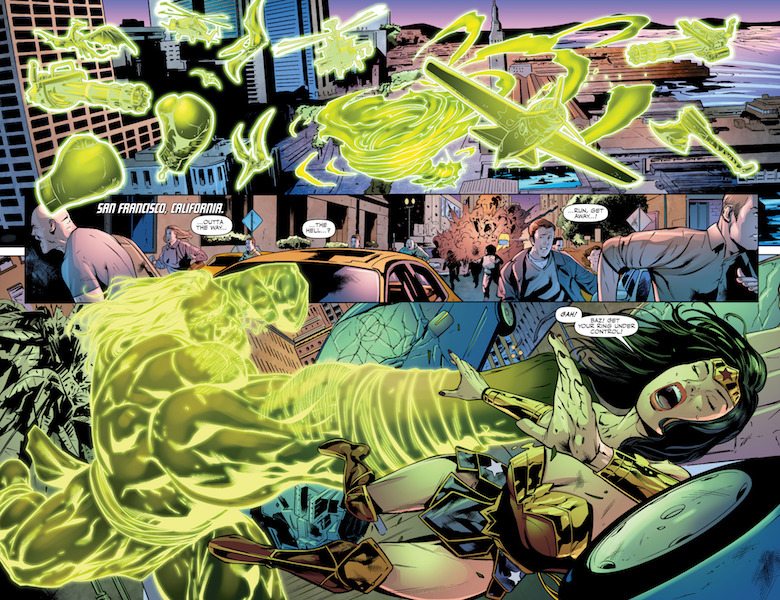 Overall, JUSTICE LEAGUE #9 is a good addition to the Justice League series. The story is interesting, but the art truly highlights the issue. Recently, the League has faced large and powerful villains such as Darkseid. It’s refreshing to see them challenged by a villain who works behind the scenes like this hacker. I wonder how much stronger the hacker is and whether or not Batman is right about his or her identify. We’ll just have to wait until next time in JUSTICE LEAGUE #10!