“The Totality” by Scott Snyder and Jorge Jiménez has been running through the newly re-launched JUSTICE LEAGUE for six issues now without slowing down. JUSTICE LEAGUE #6 is a must-read to continue this roller coaster ride that we have enjoyed thus far! In this series, we’ve seen Batman and Hawkgirl injected into Superman and Martian Manhunter’s bodies respectively. We’ve seen Grodd use an infant Turtle to tap into the Still Force. We’ve even seen the debut of the Ultraviolet Spectrum which John Stewart succumb to Sinestro’s new Corps. What’s left? Well, funny you should ask…

Warning, potential spoilers are below! 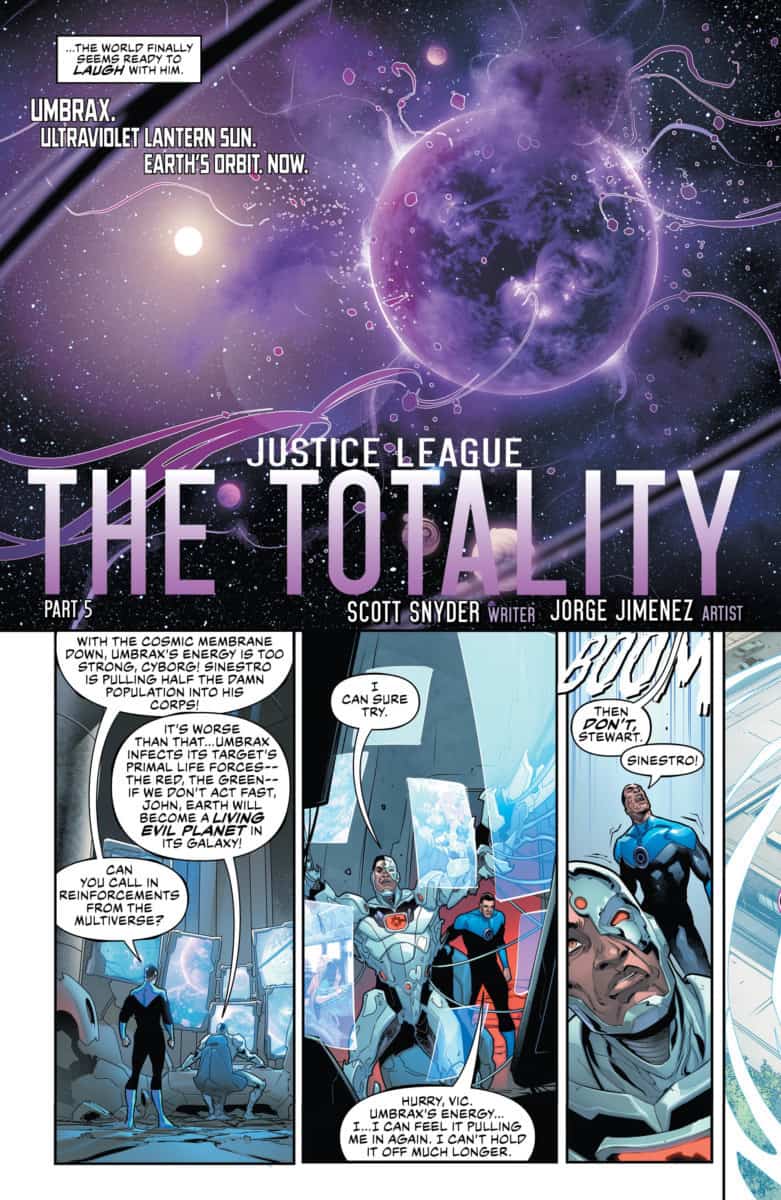 As mentioned, micro-Batman is inside Superman’s body battling Luthor. Yes, you read that right. This reminds me of an episode of JUSTICE LEAGUE ACTION, when Batman and Wonder Woman are shrunken down to enter Superman’s bloodstream. Luthor’s amazed that Batman managed to survive the attack of Superman’s mutated cells by utilizing a Kryptonite ring. Also, I found this one scene in JUSTICE LEAGUE #6 to be interesting, where Luthor criticizes Batman for bringing Kryptonite into Superman’s body. “With friends like you, who needs enemies?” asks Luthor. Luthor continues to bait Batman with another question, trying to draw a comparison between himself and the Caped Crusader. Batman’s use of humor is refreshing as he replies “I still have teeth?” after clocking Luthor in the chin. Total dental work is definitely needed for our bald billionaire.

Mister Freeze Is Put On Trial In BATMAN #51

Look Into My Eyes 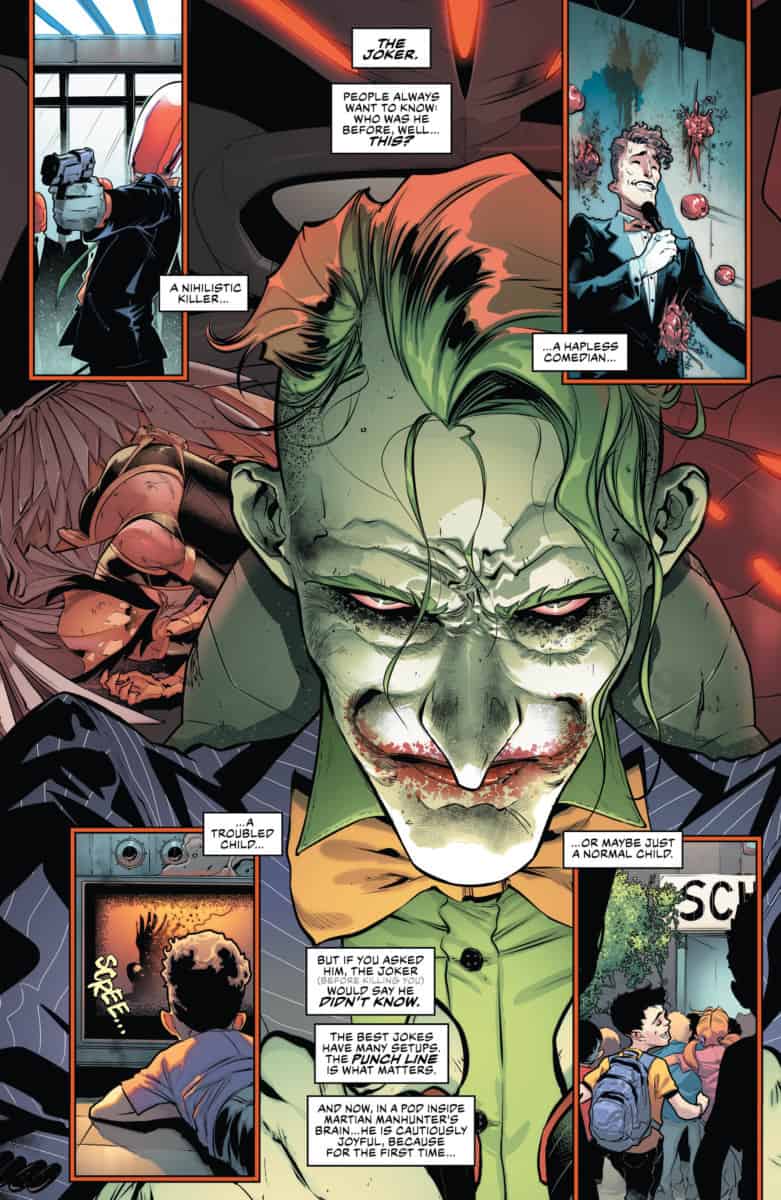 Another scene in JUSTICE LEAGUE #6 involving micro-Batman and a possessed Martian Manhunter. Who’s possessing our alien telepath? Why none other than the Joker! Imagine the Clown Prince of Crime on any given day in his own body. Now, imagine the Joker with the power of a telepath! This next scene is, unsurprisingly, a bit creepy. Jiménez’ artwork is brilliant, with his witchy-like fingers for J’onn J’onzz. I mean, the immediate image that came to my mind was that scene from THE WIZARD OF OZ and the Wicked Witch saying “I’ll get you, my pretty” to Dorothy. Meanwhile, Batman is battling with a morphing Martian Manhunter. Meanwhile, Hawkgirl manages to recover from a chainsaw blow to the head. Gotta love drawn-out villainous monologues. As the Joker explains his punchline, ironically, Hawkgirl delivers it to him in the form of a TKO with the same chainsaw.

What SPF Do We Need For The Ultraviolet Spectrum?

So it turns out that the Ultraviolet Spectrum, the Still Force, and the other items the Legion of Doom have gathered in JUSTICE LEAGUE #6 aren’t the enemy. John Stewart concludes that maybe if they stop fighting these forces, then maybe they can use them to defeat Luthor and his pals. Definitely looks good on paper, but… will it work? Batman is out of action after his altercation with micro-Luthor. Hawkgirl didn’t make it back, so she’s MIA. Flash is still a victim of the Still Force. A recovered John Stewart in his new Ultraviolet Corps uniform takes control of this situation; commandeering Flash’s Speed Force vehicle to race around the world. Meanwhile, J’onn works to rid the planet of the harmful Ultraviolet Spectrum’s effects.

What We Want To See From DCEU’s AQUAMAN

We Had a Plan In JUSTICE LEAGUE #6, But…

Before we get to the end of JUSTICE LEAGUE #6, let me give some props on the art. Jimenez’ style is a great portrayal of our favorite DC characters. I especially enjoyed the first page of a full Joker giving us a glimpse into his insanity. Additionally, his morphed image of the Joker and Martian Manhunter are very eerie. It’s a perfect merging of those two characters.

Well, the ending is certainly jaw-dropping. We might start to think, “hey, this looks like it’s working.” As Luthor notices his mystic doorknob thingy is glowing unusually, we simultaneously see each character face a personal obstacle. Unsurprisingly, the full ramifications of everything’s that happening won’t be addressed in this issue. However, the final splash page left me with my mouth wide-open! Curious to know more?  Well, here’s a hint: life always finds a way!