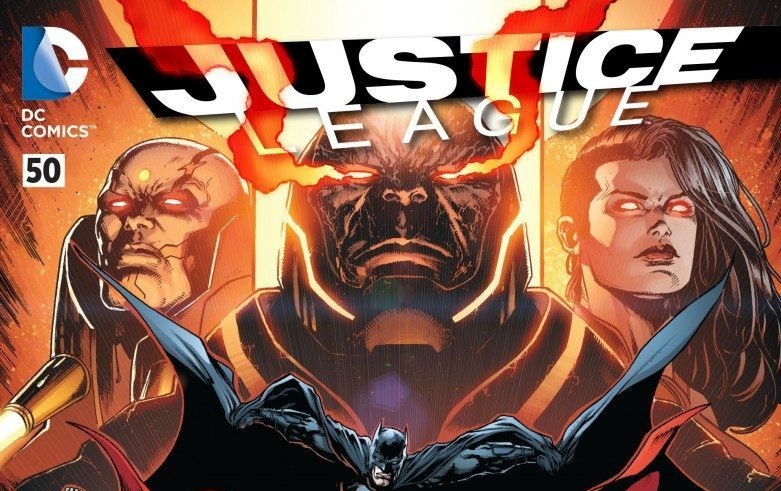 The conclusion to the Darkseid War is here in JUSTICE LEAGUE #50! It has been a long journey for the Justice League, which has gone on for ten parts and several special issues, but it’s definitely worth it.

First of all, the art is as amazing as it has been throughout the Darkseid War. Jason Fabok does justice to each of the characters featured in this issue, and there are a lot of them. Each character he pens looks unique. They have their own show of powers and abilities that is drawn unlike the others (except for the Green Lanterns). The full art pages are also especially breath taking as they signal a new plot point and reveal in the story. 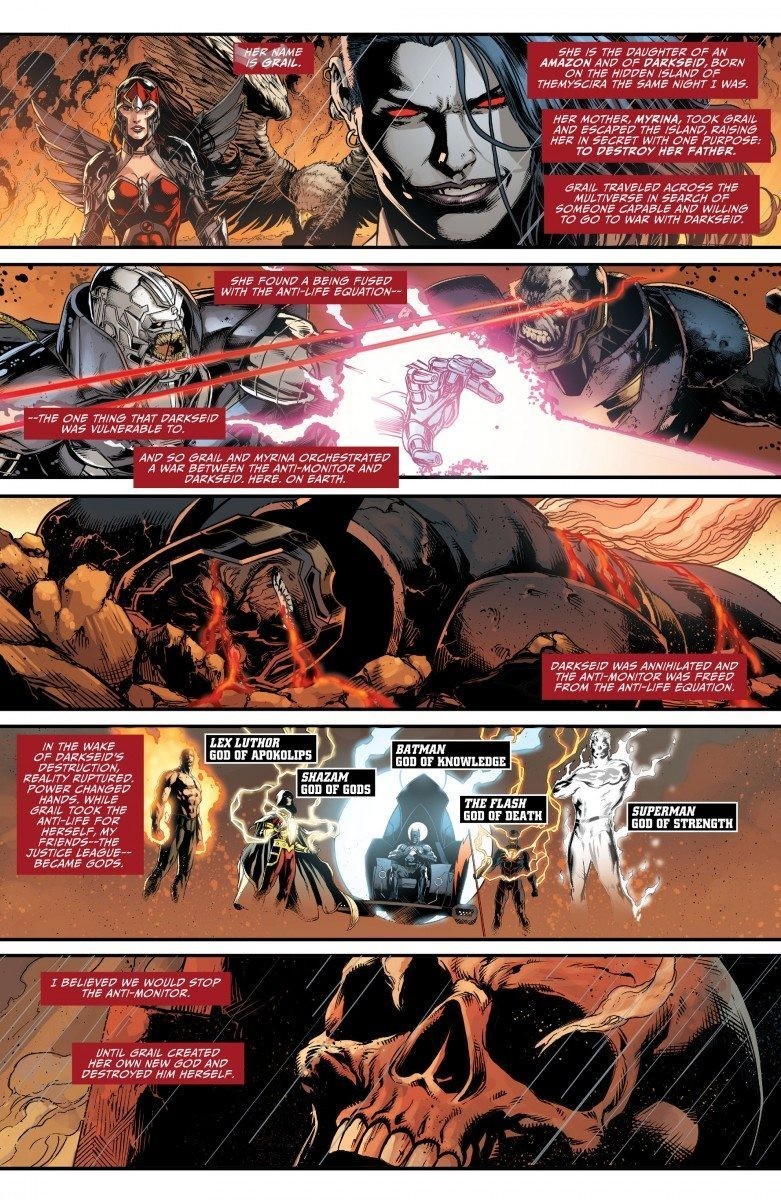 This double issue is filled with so much content that it verges on being on too much. Each page seems to jump to another plot point or reveal in order to accomplish a full story. However, Geoff johns and Jason Fabok get away with it, putting out a finale that is intense and mind blowing. The chaos throughout the story compels the audience to want to know what’s coming next and how it’s going to end. It makes sense, since Johns has built up a problem for each Justice League member that all need to be resolved individually. Power Ring has been taken back over by Volthoom, Batman is being consumed by knowledge, Cyborg is controlled by Grid, Superman was exposed to Apokolips juice, Lex is the new Darkseid, the Flash and death are one in the same, and Wonder Woman’s ex-boyfriend is trying to kill her. It’s a lot.

There is not much in the way of character development in this issue, but we do finally get to see Grail at the forefront of the story. In JUSTICE LEAGUE: DARKSEID WAR SPECIAL #1, the story of Grail’s upbringing is told, and here, in JUSTICE LEAGUE #50, Johns give us the end to that story and how she turns out. Grail has been the best part of the Darkseid War and her intense daddy issues have played out nicely, so it’s fitting that she’s a part of the end of the story arc. 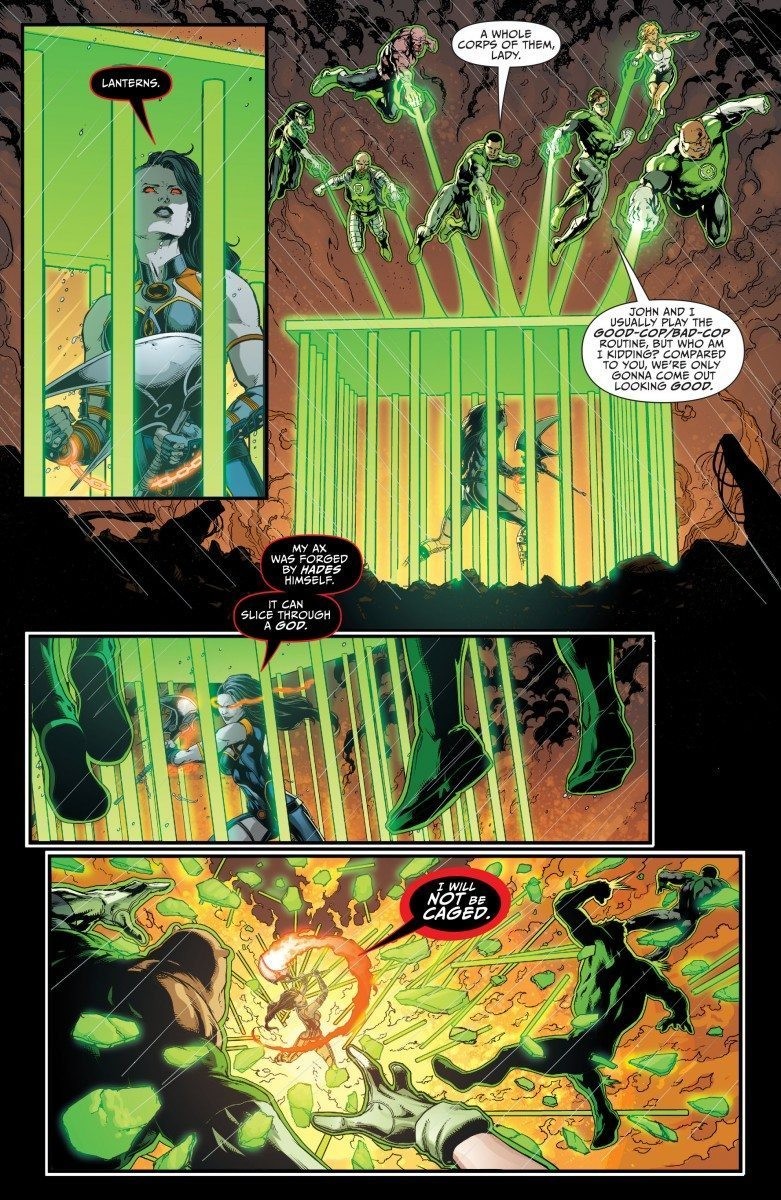 There are problems in this issue as well. As enjoyable as it is to get the call back from FOREVER EVIL with Superwoman giving birth to her child, the Crime Syndicate deserves more of an impact in this issue. The Syndicate has been sitting around in Justice League jail with Johns just waiting for this moment to use them. Being a version of the Justice League, it seems as though they would do more than just stand and watch the events occur. Also, there are some story points that need clarification. For example, when the god-superheroes get their god powers taken from them, it isn’t clear to what extent their powers are hindered. It seems as though they just go back to their original state, which does not make sense with the way their god powers were taken away. For some heroes, the powers should not have been taken or all of their powers should have been taken, including their original ones. 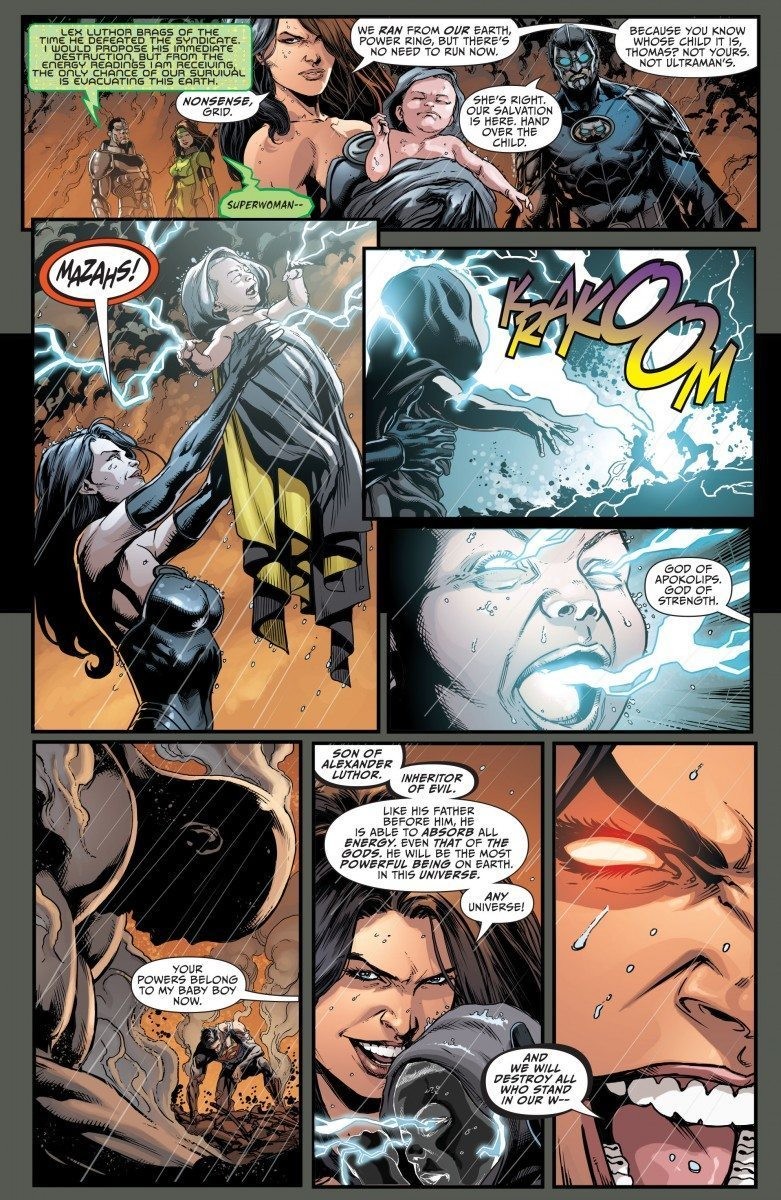 In spite of these problems, JUSTICE LEAGUE #50 does a great job leading into DC’s REBIRTH. The issue presents problems and questions for each member of the Justice League that will no doubt continue in the new REBIRTH event. The landscape has now effectively changed, and it’ll be interesting to see how DC Comics handles the new storylines to come.