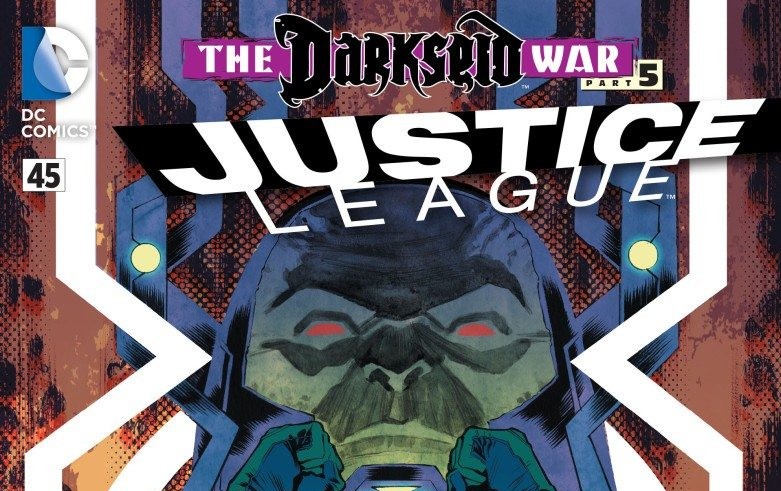 The Anti-Monitor revealed one nasty trick up his sleeve. With the Flash riding on the wings of Death, what will become of Darkseid? Of the Justice League? Of Earth?

The fallout of Darkseid’s war with the Anti-Monitor is felt on Earth and as far as Apokolips and Oa. The resulting chaos splinters all factions, and turns the worlds as they know them on their heads–with none more effected than the Justice League.

I’ve seen the ads for the “Darkseid War” one-shots. I didn’t pay much attention to them because I figured they were just cash-grabby tie-ins–things that could be interesting, but might ultimately not be worth the effort of getting them all.

That was before I knew the stakes were this high.

The events of JUSTICE LEAGUE #45 introduce a slew of new challenges for the League, many of them from within the League itself. It’s compelling, exciting, and gorgeous, but ultimately kind of a backdoor pilot for the one-shots. In that regard, it’s effective–I am now eager to read the one-shots… while at the same time I’m not really interested in the main JUSTICE LEAGUE story at all. “Darkseid War” is still steeped in Jack Kirby’s New Gods mythology to mixed results. The League’s collision with the New Gods leads to the changes for the Flash, Shazam, and Lex Luthor while continuing to affect Batman and Superman, but all those changes have, or will have, immediate consequences–consequences addressed, however, in the one-shots. What’s left for the main story in JUSTICE LEAGUE is something about the Anti-Monitor transforming into Mobius and… I really didn’t care. It was explained by Grail and her mother standing around talking about it as if it’s important rather than its importance being demonstrated with action and circumstance. Who knows where this is going? Maybe the one-shots will loop back into the main story and some of that immediacy will contribute. Right now, though, there are a lot of interesting and exciting pieces not really doing anything.

READ: CATCH UP ON OUR JUSTICE LEAGUE COVERAGE!

One of the most exciting pieces is that is doing something, however, is the art. For the first arc of “Darkseid War”, Jason Fabok and Brad Anderson and Rob Leigh established a strong, elaborate, and busy look. Everything was rendered sharply and expertly–and I mean everything–and the art never failed to live up to any of the moments Geoff Johns could think up. That said, it was a very realistic, presentational style of art. That isn’t a bad thing, by any means, it just means that when Francis Manapul and Brian Buccellato take over in this issue, the change is jarring–excitingly so. What Manapul and Buccellato bring to the table is something much more impressionistic and representational, something at once bolder, but simpler. Diffuse colors and softer lines give everything a painterly, almost dreamlike quality. It’s almost as if the emotions and action present in Johns’ story simply manifested on the page and Manapul and Buccellato just fought to contain it. What results is a potent and visceral style that means sometimes the dreams can feel like nightmares.

It’s as if elements of DEADLY CLASS, BLACK WIDOW, and SECRET WARS–with a little Sean Murphy thrown in–blended together for some of the most interesting visual work from DC right now. No, the work isn’t totally impressionistic; while they’re certainly to the right of Fabok and Anderson on that spectrum, Manapul and Buccellatto are still to the left of artists like, say, Dave McKean–and even he still has some room to the right. Regardless, though, what’s rendered are more emotional paintings than snapshots of real life.

I only hope JUSTICE LEAGUE can live up to what they’re doing. As I said above, the main part is the least interesting part, with Wonder Woman, Cyborg, Power Ring (poor Jessica Cruz–she’s been Power Ring for all of five minutes and now has to contend with all this), and Steve Trevor left cleaning up the mess of the war and dealing with Darkseid’s lieutenants, while all the other characters run off into their own books for their exciting parts. Because they’re all one-shots, however, I hope they’ll all be in a narrative place to come back for more JUSTICE LEAGUE and add to the stakes and circumstances. Otherwise, JUSTICE LEAGUE #45 just did a great job of saying, “READ THESE BOOKS… but stop reading this one.”