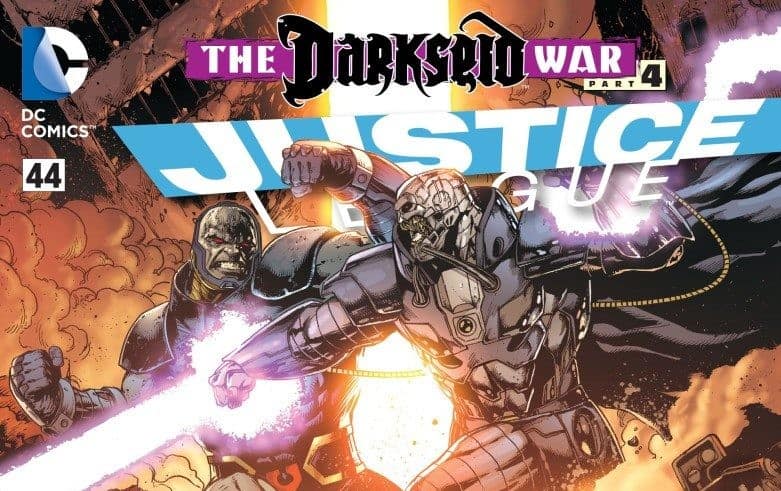 The Darkseid War comes to a stunning climax!

The War rages on Earth as Batman and Green Lantern search for the source of the Anti-Monitor’s power. Even if they find it, will they be able to stop him before he destroys Earth? 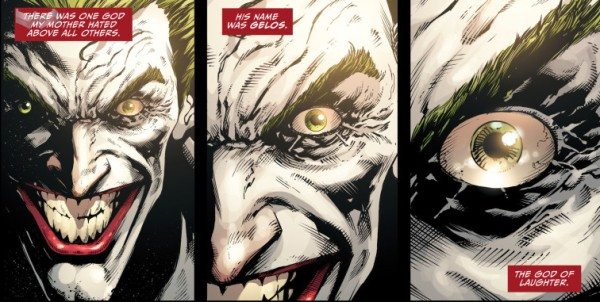 I don’t quite know what I expected out of this arc of JUSTICE LEAGUE, but what’s delivered in JUSTICE LEAGUE #44 isn’t quite satisfying. Especially with Batman on the Mobius Chair and Superman turning evil, the whole thing seemed to be building to some sort of greater truth that was beyond just a war between two celestial beings. What’s at it’s center is… disappointingly specific. It has dangerous implications for the universe, of course, and it yields one particularly frightening moment concerning Shazam and his powers, but it’s not new. 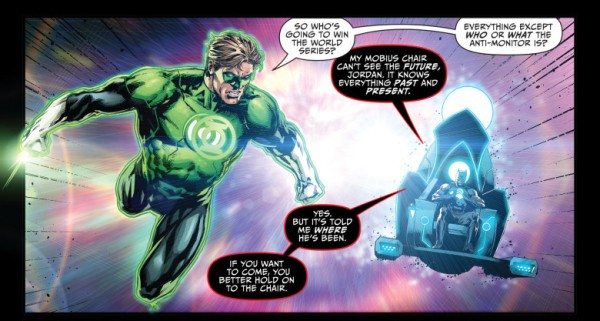 READ: THE JUSTICE LEAGUE TRAVELS BETWEEN WORLDS WITH EASE, BUT IN THE REAL WORLD, HUMANITY’S JUST GETTING STARTED!

I wonder if that’s what, after all this time, Geoff Johns’ deal is. Much in the same way Steven Moffat thinks he can take the canonical pillars of DOCTOR WHO and repurpose them to his needs, to make them his own, maybe that’s what Johns does. He doesn’t craft anything particularly new but rather tries to make a better version of what’s come before?

Artistically, it’s hard to imagine something better than JUSTICE LEAGUE–especially this issue. In keeping with my above comments, the art, as I’m sure you know by now, isn’t doing anything bold or experimental, but is just exceptionally well done. I think I notice that more readily in this issue as I look for something to like, something to get excited about. The separation between writing and art is much more obvious this time around, with the team having to craft compelling scenes and moments to prop up expositional monologues and dialogue. 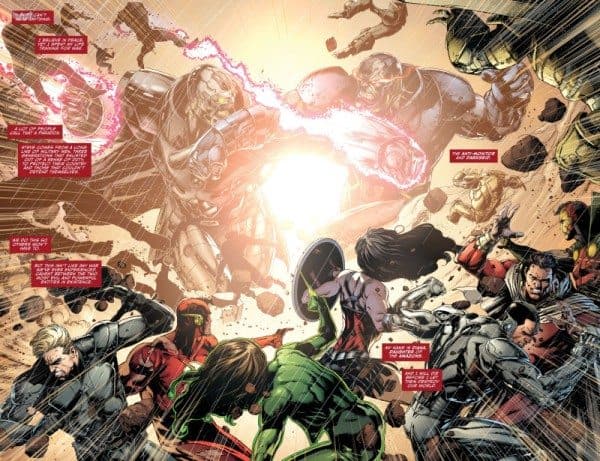 READ: THING’S ARE A BIT QUIETER IN GOTHAM CITY AS DICK GRAYSON RETURNS HOME IN GRAYSON #12!

There’s still something to enjoy in both Batman and Superman being jerks to their respective scene partners, and in the battle sequences, which are rendered viscerally, compellingly, and in many cases, stunningly.

It’s all flash, though (pun kind of intended). In no moment is that truer than the opening panels. Despite gorgeous visuals, the Joker’s presence, even just thematically, is curious. For fan service? To cash in on his recent resurgence in popularity? To promote the release of the “Endgame” trade paperback? It’s justified through some allusions to laughter on the battlefield and an inelegant visual transition to Batman, but it just encapsulates the issue’s, well, issue: look past the surface and there’s not much going on there.

Read my previous reviews and you’ll know I was very excited about this arc, but JUSTICE LEAGUE #44 is deflating. I feel like Johns let down the arc’s compelling opening and one of the best artistic teams working right now to just revisit something that barely made sense in the first place. Read JUSTICE LEAGUE #44 to find out what happens and appreciate the artwork, but don’t expect to be thrilled.

WE HAVE PLENTY MORE REVIEWS! CHECK ‘EM OUT HERE!