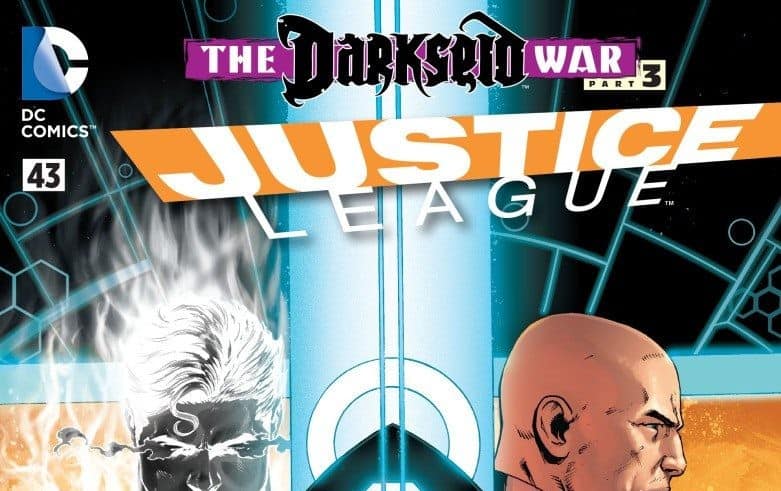 Darkseid arrives on Earth! His war with the Anti-Monitor begins! What chance does the Justice League have to save the planet?

Despite having access to all the information in the universe, the Bat-God can’t find a way to stop the Anti-Monitor from using Earth as the stage for his grudge match with Darkseid. Now joined by Miracle Man, the Justice League heads to the battlefield without their greatest hero: Superman is stuck on Apokolips with Lex Luthor. The League hopes to delay the battle between the Anti-Monitor and Darkseid until Batman and Green Lantern find answers while, despite being shot by his own sister, Lex Luthor’s day somehow gets worse…

It’s hard to follow an issue that gives us the Bat-God, and thankfully JUSTICE LEAGUE #43 doesn’t try to top that. It most certainly reads as an interlude issue, dealing with the events of #42 and setting up #44, but it doesn’t take those duties lightly. Each panel is crammed with characters, settings and visual cues, and each page pushes the story forward. That is no small task considering the sheer number of players, the scope of the story, and the pace at which it all unfolds. Geoff Johns is certainly putting his artistic team to the test, and they are rising to the challenge.

The best thing, for me, about the Justice League–about any big team story, really–isn’t the big-scale action (though that obviously has its appeal), but getting to watch the interpersonal dynamics at play. Keep in mind that the Justice League is comprised of characters that lead their own monthly issues, to say nothing of the fact that they’re all decades old. Even with their soft reboots in the New 52, these are some of the most sharply defined characters in all of popular culture, and they’re all in one place.

Thankfully, Geoff Johns appreciates that and, even though the touches are subtle, the distinctiveness of each character plays off the others perfectly. The comic book just wouldn’t work if it didn’t. From Batman’s omniscience manifesting as a logical extension of his arrogance, to Shazam’s ironic lack of gravity, to Superman and Lex Luthor’s adversarial camaraderie, the characters act the way we would expect them to, but in a way that’s at once amusing, compelling, and satisfying. Even with the (relatively) newer characters, their points of view and given circumstances are undeniable (the first three pages are a lesson in [re-]introducing a character). It’s of course not the first time something like this has been done, and it certainly won’t be the last, but it’s an important grounding aspect in an otherwise alienating story.

And the story is alienating. How can we mere mortals engage with a story of this kind beyond the fact that it takes place on our planet? Comic books obviously require a suspension of disbelief, but Justice League stories, especially Darkseid stories, tend to require a little more. Johns, again, doesn’t take that for granted. I’ve been wondering why Wonder Woman is the narrator for this story–not that I’ve minded–and her final monologue in this issue makes it abundantly clear she’s the right choice. Straddling the world between gods and mortals as she does, Wonder Woman’s the perfect choice for grounding this story in a context we can appreciate. While she’s always been a part of the Big Three, it’s sadly obvious she’s been third, behind Batman, behind Superman–despite the fact that she’s oftentimes more capable than either of them. With both Superman and Batman gone, she is undeniably in charge, and at a time when the Justice League is potentially at its most futile.

She stands on the battlefield watching the Anti-Monitor and Darkseid charge at one another, and she doesn’t know what good she and the League can do. That doesn’t stop her from leading her own charge, however, because she’s a warrior, a sworn protector of Earth, and even if she can’t win, it’s her duty to try.

It’s a human moment amidst an incredible story (“incredible” here meaning “difficult to wrap your head around”), and I’m grateful it’s allowed to happen. It unfolds subtly, through internal monologue and ultimately manifesting in one final panel of Wonder Woman’s look of determination, and it isn’t rushed. That’s the most remarkable thing about the three issues of this story so far.

That Jason Fabok, Brad Anderson, and Rob Leigh have managed to consistently craft such rich, detailed, and busy artwork without it ever feeling muddled or confusing is nothing short of an achievement. From the smallest panel to the biggest splash page, the events and sequences are clear. It makes sense that DC Comics would promote JUSTICE LEAGUE OF AMERICA over JUSTICE LEAGUE as the former launched recently with a #1 as part of their DC YOU campaign, but the work going on in JUSTICE LEAGUE demands attention.

No, the story doesn’t move as much as you would like for something that only comes out monthly, but when the craftsmanship and character work is this strong (especially in an “Event” issue in an “Event”-heavy climate), I can hardly be mad about it.

JUSTICE LEAGUE #43 is another strong entry in a strong series and, being the third part of this series, I’m willing and excited to call that a trend.

READ MORE OF OUR REVIEWS!

AND CHECK OUT MORE BY DANNY!