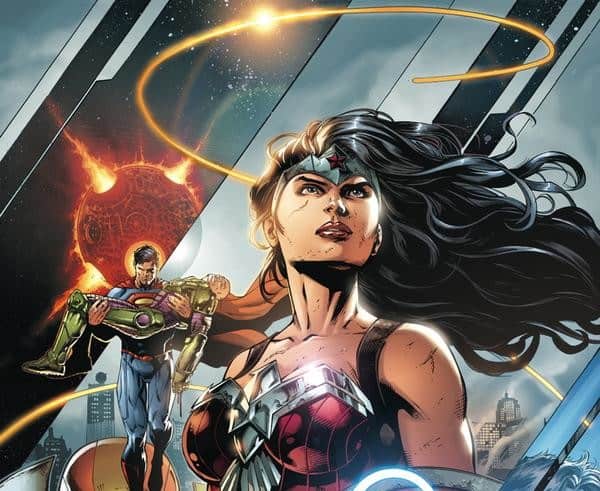 War! Darkseid vs. the Anti-Monitor, and Earth is their battleground! Can the Justice League intervene before BILLIONS perish?

A warrior claiming to be Amazonian comes out of nowhere at the end of JUSTICE LEAGUE #41, easily defeats the League, and uses their shadows to summon the Destroyer, the Anti-Monitor, whatever you want to call him. In JUSTICE LEAGUE #42, the League is rescued from destruction at the last moment by Metron, who informs them that war will consume the Earth and the League’s only recourse is to flee, or die. Darkseid and the Anti-Monitor are shoring up their forces and Metron seems to be telling the truth, but Wonder Woman refuses to back down and lassos Metron, demanding answers. We learn Metron isn’t the man speaking, but the chair he’s on. After Wonder Woman pulls him free, Batman climbs in the chair and the issue ends in such a way that had me laughing with glee.

Any plot involving Darkseid is DC Comics at its most unbelievable. I don’t mean that in a bad way, I just mean when you contrast the Darkseid stories with say, Marvel Comics’ Spider-Man or even their own Batman, intergalactic wars with gods and demigods and slave planets demand the largest stretch of the imagination. In lesser hands, it could be silly. In Geoff Johns’ hands, it’s not. He and his team (Jason Fabok on pencils, Brad Anderson on colors, and Rob Leigh on letters) are firing on all cylinders, lending maturity, dynamism, and pure fun to a story that could collapse under the weight of its own stakes while looking silly in the process. 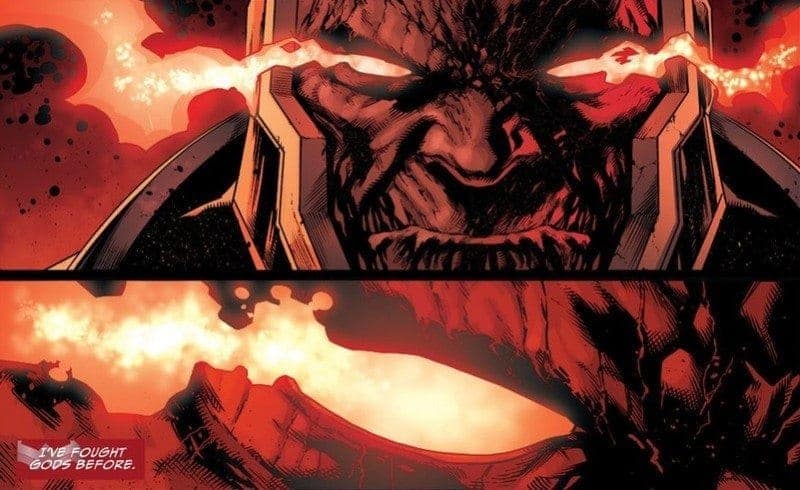 Johns’ stuff is not always necessarily new, or different, or bold, but he has to be one of the best writers DC has. The best exposition is invisible, and Johns’ is harder to see than J’onn J’onnz himself (a character notably absent from this series–so far). Refreshingly, his exposition (and writing as a whole) is all motivated by the characters: anything we learn is because a character needs us to know it so they can explain their actions. Most of the exposition is handled through internal monologues in boxes contrasted with action- and detail-filled panels, forcing you to engage with two narrative threads. Any exposition through dialogue is pieced out, tantalizing you, demanding your attention. You’re given just enough to be intrigued, devouring every scrap of information to piece together everything that’s happening.

And a lot is happening. # 41 was a little bloated, but that’s to be expected from the set-up of a new arc, especially one with so many players and so many circumstances. This issue settles down (a bit) and sets up the three main players: Darkseid, the Anti-Monitor, and the Justice League. Everyone’s points of view and wants are so clear that they act on them almost immediately, making the pages fly by. You close the issue almost grateful that you can breathe again. 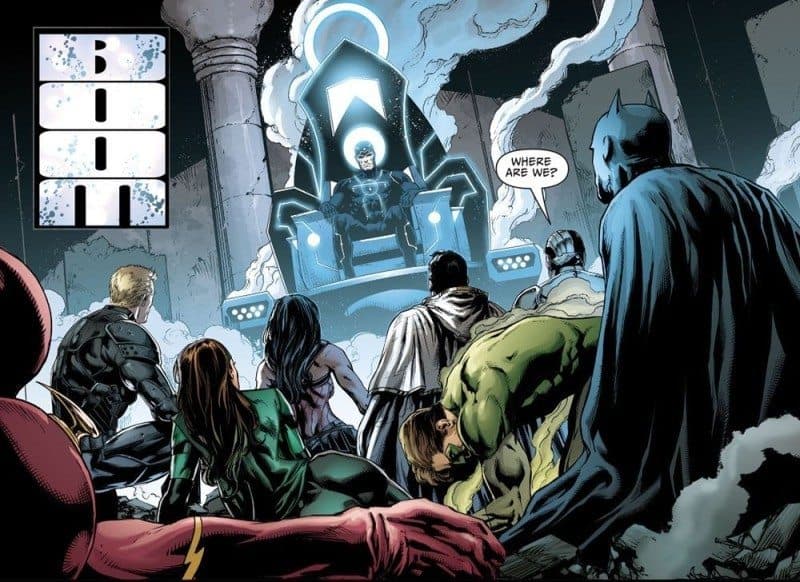 It’s a little disappointing that the art is so realistic, but given the stakes and heft of the story, anything different would’ve been just too much for the reader to handle. That isn’t to say the art isn’t outstanding. Fabok and Anderson never waste a panel, never waste an opportunity to give you all the information you need, never half-ass a character or a background. The world is lush and saturated and practically a blockbuster movie. There were moments in reading both issues that I had to go back because I missed something in the moment-to-moment action–I would laugh in enjoyment because the information I needed was in the panel, and I just missed it. It brings to mind movies like TINKER, TAILOR, SOLDIER, SPY in which a lot of the storytelling is visual. That seems an obvious thing to say in comic books, but JUSTICE LEAGUE takes it a step further.

I almost wish I had something actually bad to say about this run. Everything about its execution is top notch, allowing you to sit back, strap in, and let Johns’ story take you on a whirlwind of a ride. Especially after that last page (THAT LAST PAGE!), I cannot wait until next month.