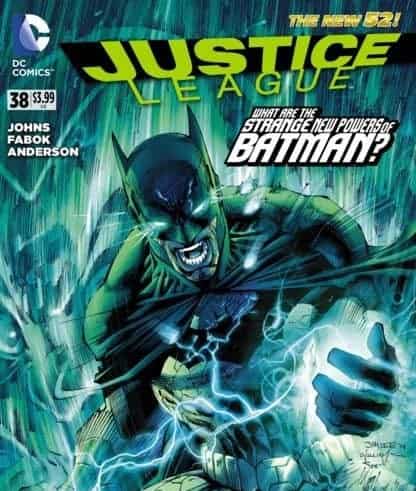 Apparently Damian isn’t the only member of the Bat-family getting super powers this week! This issue we find the only surviving members of the Justice League; Batman, Superman, and Wonder Woman, attempting to stop the Amazo Virus that threatens both superheroes and civilians. The heroes are forced to work with Lex Luthor in order to stop this virus, and in order to do so they have to bring in a metahuman known as Patient Zero. The trio attempt to take down Patient Zero, they are able to subdue him with the help of Super-Batman (I’m sorry, I had to).

It would appear that the Amazo Virus, which was created to rob a metahuman of their powers, has a reverse effect on humans. The virus causes Batman to have the powers of a bat; echo-location, sonic screeching, and being blind. These powers are only temporary, Batman describes three stages that infected victims go through and he is in the second stage. The third stage is the inevitable break down of the body, leading to death.

This issue featured some stellar artwork with plenty of dark overtones to reflect the stories situation. The page where Batman uses a sonic scream could only be defined as epic. Seeing the unlikely team-up of the villains and superheroes, although at this point it’s not that uncommon, was entertaining. Superman and company still have difficulty trusting Lex Luthor, especially after he reveals that he tried using the Amazo Virus on Superman to rid him of his powers. Tensions are high among the characters, but the comic still does a decent job at explaining the plot without derailing too much from the action. Throughout the comic we find the infected muttering the “Us” which ultimately leads to them rising and coming to attack the uninfected Walking Dead style.

The cliff-hanger ending entices me to read the next issue and I suggest you do as well, this is getting interesting.

Overall:
-The artwork certainly represents the story being told, dark yet very colorful
-The heroes being forced to work with the villains is a writing technique that is starting to lose its impact
-A good rising action comic that raises the stakes and leaves the reader wanting more