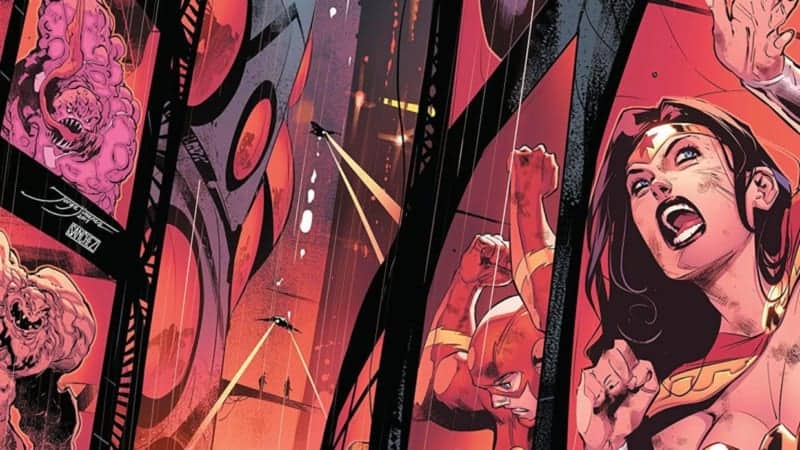 For two years, Doom and Justice have been on a collision course. Perpetua, the mother of the Multiverse and the embodiment of the forces of Doom, has been freed, and her children, as well as the Justice League, are desperate to stop her. The World Forger, one of her children, has decided to create a more ideal Multiverse. He hopes that it’s one that will seemingly pass the judgment of the beings above him. The Justice League tried to stop him, and in JUSTICE LEAGUE #23, Scott Snyder forces the League to face the dark reality of World Forger’s universe. A universe where every villain is imprisoned on Apokolips, alongside the League!

The Justice League find themselves prisoners on Apokolips, with Lois Lane as their warden. This Lois has been through a lot, due to multiple iterations of World Forger’s attempts at a new Multiverse. Lois has watched her son die multiple times in those universes, and she has lost her optimism and replaced it primarily with cold pragmatism. That happens because her husband (Superman) would not give up hope. She imprisons the League, who suddenly realize Batman is not among them.

Batman stayed behind with the World Forger because he is curious to see if his plan to replace the Multiverse will work. World Forger explains his plan. Mxyzptlk is being used to unmake the Multiverse. That will set off the Crisis Anvil. World Forger will then use the Anvil and his hammer to hammer this Multiverse into place. There’s only one problem. The problem is Superman.

Superman is trapped in a pocket universe. There’s a distant sun that provides just enough for him to live, but not to power up. Superman is valiantly attempting to escape — and being the Prime Superman, he might succeed where the others versions failed. World Forger asks Batman to make a tough choice: push the suns away and consequently let Superman die, but have his essence live on in World Forger’s body, or allow Superman to possibly succeed and ruin everything.

Back on Apokolips, the League looks for ways to escape, but with their powers dampened, it’s unlikely. Shayne, the son of J’onn and Kendra, is with them. J’onn encourages him to use a psychic blast and coaches him through it. Shayne displays remarkable power, obliterating their force field… and that of all the other prisoners as well! The League runs for their lives from the enemies their future selves imprisoned. The alternate Legion of Doom intercept the alternate League in a ship and tell them to climb on board. The League obliges and they set course with their former enemies.

Without saying too much about the end of the issue, Scott Snyder certainly took things to a much more dramatic place. Snyder has put the League in a desperate place, and they are making desperate decisions. Hopping on a ship with their sworn enemies, and also contemplating killing fellow team members… things are not looking great for our moral paragons.

The most moral of them all, Superman, is in the most trouble, seemingly. Superman is in one of his worst case scenarios. Without their biggest gun, the League is being tested, and Snyder is showing us interesting wrinkles in their personas. There’s also an interesting juxtaposition of Batman and Superman that Snyder makes in this book: Batman has the ultimate will to win and Superman has the faith that things will work out in the end.

The story itself, leading into YEAR OF THE VILLAIN, is captivating. Everything is a mad dash, a race between the Legion of Doom and the Justice League. It’s interesting to note that the “future” or alternate Legion only has Sinestro, Grodd, and Cheetah. Where are Lex and Brainiac in that version of the Legion? Snyder effectively keeps the reader on the edge of their seat with action and consequences but also weaves in little mysteries like the missing Lex and Brainiac.

The excellent Jorge Jimenez returns to art duties on JUSTICE LEAGUE #23. His artwork is beautiful when it needs to be like it is in the flashback sequence with Jon and Clark. It can also be moody and dark, like in the entire chase sequence on Apokolips with the League. Jimenez’s flair for the dramatic really shines in this issue, and it’s nice to see him back on the book. I’ve primarily enjoyed his SUPERMAN cover work back when Tomasi was writing the series, and I hope he stays in rotation on JUSTICE LEAGUE.

Credit also goes to Alejandro Sanchez for his work accentuating the mood with his color work. The bleakness of Apokolips comes through with his use of red, which also is reminiscent of DC’s CRISIS theme: red skies. He also does a great job keeping Superman’s flashback brightly colored, demonstrating the light and optimism Superman brings.

Can the League Stop the World Forger?

Batman has apparently decided where he stands, and the League is racing towards the World Forger with their once sworn enemies. Will their combined might be enough? Can the Legion of Doom of the main universe stop Mxyzptlk’s rampage? Above all, can they even stop Lex and Perpetua?

Snyder and Jimenez have raised the stakes about as high as they can, primarily with forces beyond what the League normally faces in Perpetua and World Forger. The entire multiverse may be rewritten, and we don’t know if the League can actually stop the World Forger. JUSTICE LEAGUE is turning out to be one of the most exciting and premiere books DC offers.