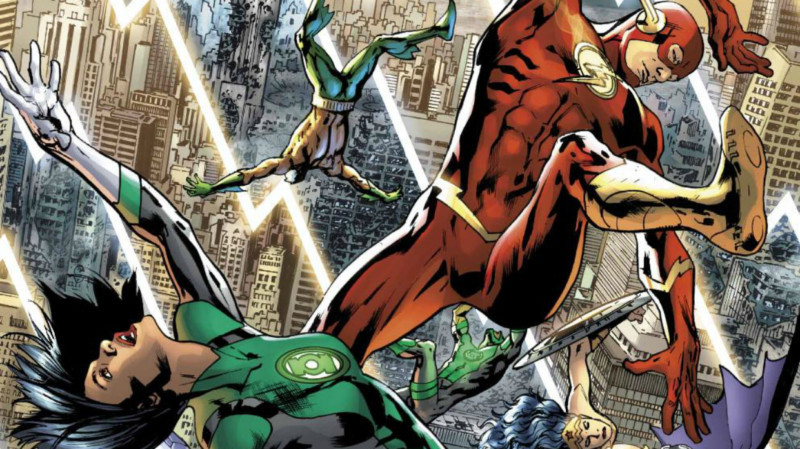 The Rebirth JUSTICE LEAGUE series has followed on a very standard story beat from the beginning. The scope of their stories has been grand, with a heavy focus on apocalyptic threats with minor segues into the grander undercurrents of the Rebirth storyline. In some ways, this is a nice change of pace from the heavily character-driven storytelling of each member’s individual series. The series’ greatest strength so far has been how it ties together these massive-scale incursion events with exploration into the League’s members. But in JUSTICE LEAGUE #20, Groundhog Day gets deadly serious. Does the League’s newest adventure stack up?

While JUSTICE LEAGUE #20 does reduce its scope from the apocalyptic, something feels off with the change of direction. The story starts on a city street that has been reduced to rubble. The Flash crouches over the limp form of Green Lantern Jessica Cruz, begging for her to hang on to life for as long as possible. Cruz is dying, and Barry can do nothing. This starts deep in media res. I firmly believed that I missed something crucial in the last couple issues of the series.

A two-page splash reveals our nameless villain, surrounded in a bubble of energy and wielding what can best be described as a high-tech jackhammer. This man (named Mr. Amazing due to a quip later in the issue) stands in the ruins of New York City. He states, “Why should you live when she didn’t? When they didn’t?” Flash, not knowing what Mr. Amazing is talking about, attacks, and on contact with the mysterious device, things get weird.

The contact with Mr. Amazing’s device spits Barry out into the near past. It’s portrayed as a sort of flashback at first but one that Barry has a severe case of deja-vu about. At coffee with Jessica, Mr. Amazing assaults the pair and the events play out exactly as before. This happens again and again, each time with Flash jumping slightly further back in time. At each time jump, Mr. Amazing attacks a little earlier than before, altering events slightly each occurrence. Flash realizes he has fallen into a time loop and brings in the rest of the League for aid. Here, they confront Mr. Amazing, but their involvement sets up a surprising twist origin for the supervillain.

A Heroic, if Not Confusing, Start

In some ways, JUSTICE LEAGUE #20 is a success. The opening visuals of the city destroyed and Flash cradling the dead body of his ally and friend are striking. It hooked me into the story even if I didn’t understand what exactly was going on. I almost would have preferred seeing the events at the coffee shop before being thrust into battle with Mr. Amazing.  I do have to applaud Brian Hitch for attempting to avoid a trope of Time Loop stories. By thrusting us into the middle of the battle instead of into the repeated events that came before, it allows us to unfold the events of the story instead of forcing us to reexperience the same story and dialogue constantly.

This story is on an adrenaline drip. Every page has some form of combat, and for an opening issue for a story, that does help keep me invested. It is a quick read, if not a deep read. There is the constant mystery surrounding the identity of Mr. Amazing, but outside of that, this is a battle issue.

READ: Why you should be catching up on the BOOM! Studios’ POWER RANGERS PINK series!

What strikes me about this issue is the aforementioned reduction of scope. This isn’t a combat with some alien army or even a group of superpowered baddies. JUSTICE LEAGUE #20 scoffs at that idea by giving us one normal, hurting human being that is messing with time. Mr. Amazing is targeting Barry Allen; anything else becomes collateral damage. So much of this story is packed up in the mystery of who Amazing is and why he is doing all of this, and for the first several pages, that is a really interesting and compelling narrative drive.

Before we even get to the final pages, all of that mystery dissipates. We find out who Mr. Amazing is, as well as the why and how behind his targeting of the Flash. This mystery kept me reading, but it felt lazy to just drop that narrative thread. The one story point that I deeply appreciated in these final pages was the League’s involvement in inciting this villain’s evil-doing. It leaves this story open to a lot of character growth in later issues, but I only wish that the characters were better explored here.

The Mr. Amazing mystery would have been acceptable if the story’s reduction in scope had taken the opportunity to really dig into the lives and minds of these characters. So much of the story finds Barry Allen confusedly questioning what is happening or suffering over the death of Jessica Cruz. It doesn’t dig into his personality, and much of the dialogue feels like Hitch ripped it straight from the pages of a police procedural drama. Mr. Amazing has the potential to be a really compelling villain because he feels like the least staged character, but even he is not interesting enough yet to carry the story on his own.

The art in this issue is not the strongest I have seen from Daniel Henriques and Brian Hitch. While the lighting and form were all there, it felt rushed and inconsistent. The big combat set pieces, with cars and stonework being thrown around, share some incredible composition and paint work. They definitely display the talent behind this creative team. The close-up moments, where detail needs to be spot-on, fall apart. Here, the issues are primarily subtle, just glitches in the anatomy or shading, but they become more and more obvious as the story continues on.

In total, JUSTICE LEAGUE #20 did not excite me in the way other Justice League stories have. With the reduced scope, I expected something closer to the “Graves” story arc from the New 52, where we got a deep examination of the histories and personalities of the League members. Even with a solo focus on the Flash as the protagonist, the inconsistent art and lackluster characterization make this a rather bland entrance into what could be an amazing story arc. The possibility exists, but the gears need to click into place.