JUSTICE LEAGUE #10, part three of the “Outbreak” storyline, reveals who’s behind the cyber attack against the Justice League (excluding Superman and Jessica Cruz). This mysterious enemy of the League is far from defeated, as writer Bryan Hitch further escalates the conflict with the addition of new threats. Despite the unimaginative plot reveal and unbalanced art, these new threats makes this a fun read while keeping you interested long enough for the next issue.

READ: The JUSTICE LEAGUE was faced with all sorts of trouble in the previous issue. Read our review of the cyber attack!

In previous issues, the mysterious hacker managed to take over the League’s Watchtower, the Batcave, and even Simon Baz’s Green Lantern ring. In JUSTICE LEAGUE #10, Hitch further complicates the plot with the reveal of the Genie, the main cause of the cyber attack on the League. Described as a search engine that can “figure out exactly what we want and just give us the right results every time,” this Google 2.0 seems to be granting and fulfilling wishes, specifically one from a child who lost his mother during the events of the Kindred Crisis (as seen in “The Extinction Machine” storyline). The Genie further transcends this boy’s imaginary scenario of what would have happened if his mother didn’t die and the League lost the battle by promising the fortunes of Lex Luthor and Bruce Wayne to whoever is able to destroy the Justice League. Cue the super villain ambush. 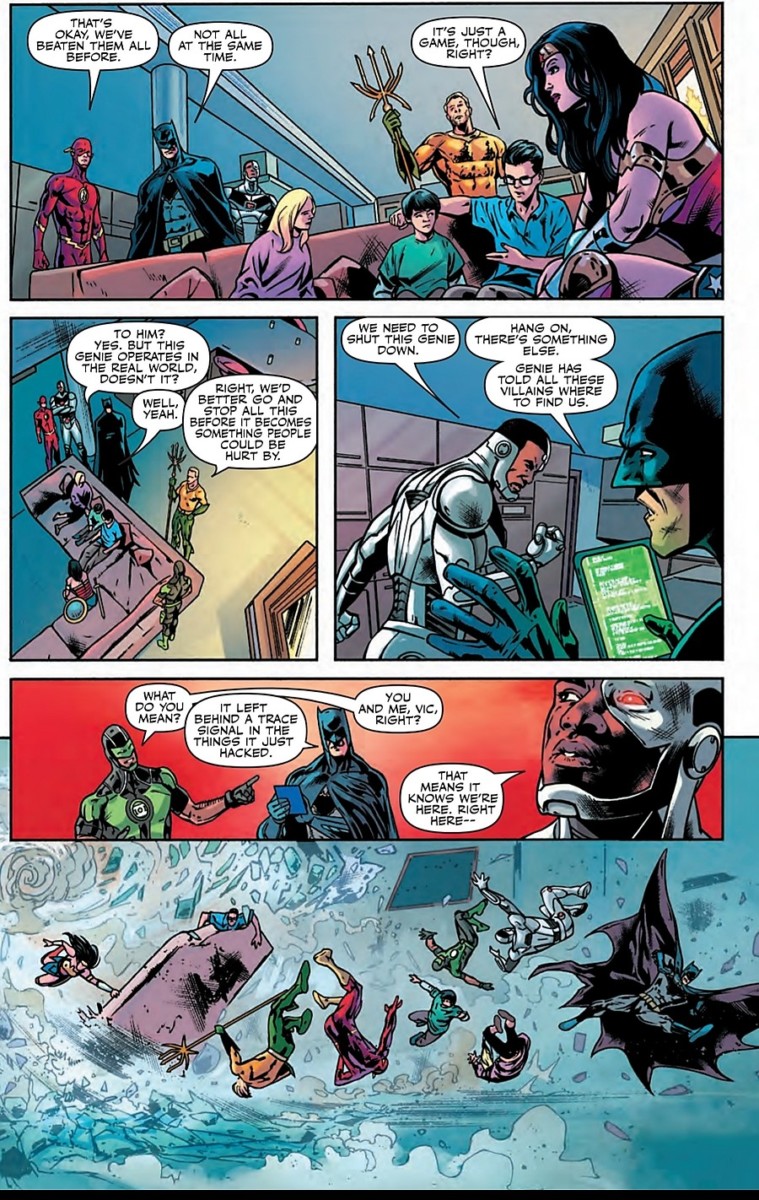 The League is outnumbered but not shaken by the C-list villains that emerge to attack. The Super Friends remain confident until Amazo appears for an epic cliffhanger. Amazo, known for his ability to duplicate metahuman powers, has given the Justice League all kinds of trouble in the past, so it’s exciting to see him return. The villains that appear in this issue also have some fun action scenes, so let’s hope Amazo’s presence will also lead to a promising fight against the Justice League.

The “Outbreak” story arc in JUSTICE LEAGUE #10 further establishes the fun, teamwork vibe seen in previous issues. However, the reveal of the Genie feels a bit misplaced, as if the writer was unable to come up with a proper reason for why the thing exists in the first place. It’s hard to believe a search engine, even with its complex coding, can potentially succeed where more powerful threats have failed. Hitch is retelling the League’s inability to save a mother during the Kindred Crisis, therefore resulting in their current situation. Yet, the Genie feels like a lazy plot device and an unnecessary callback to the Kindred Crisis. What works well are the types of trouble the Genie is able to manifest for the League, such as the cyber attack and even going far as putting a massive bounty on the heroes. It’s intriguing to read about a faceless villain and wonder how the League will stop it, but Hitch’s explanation behind Genie’s presence seems to lack creativity.

READ: Excited for the holidays? Then you won’t wanna miss BATMAN ANNUAL #1!

Hitch also does his best to showcase all the members of the League, but some costumed heroes outshine others. For example, Batman helps to further the investigation, thereby progressing the plot, while Aquaman and Baz are underutilized and mostly present for action scenes. The next issue wraps up the “Outbreak” storyline, so we’ll just have to wait and see how Hitch will further develop each hero and what other tricks this Genie might pull out from its… cyber lamp? 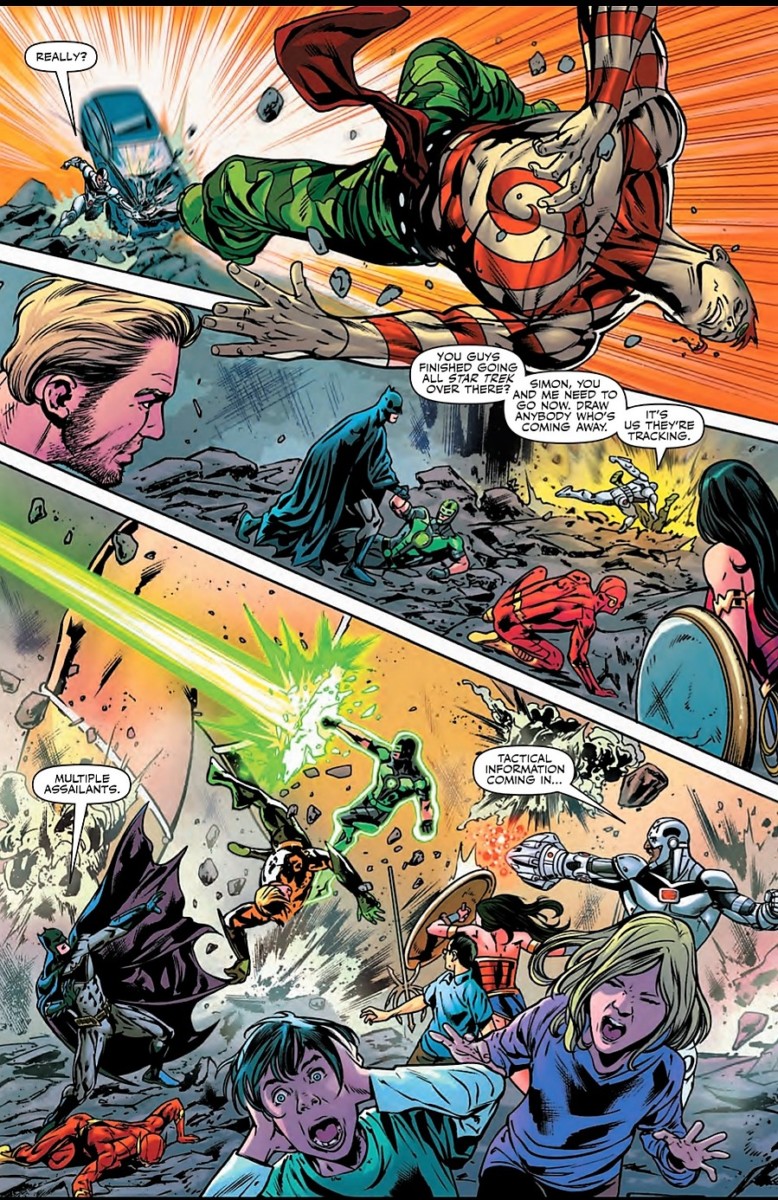 Neil Edwards’ linework and Daniel Henriques’ inking create intriguing artwork on certain pages of JUSTICE LEAGUE #10. The duo will dazzle you with close-ups of characters’ facial expressions and flashy fight sequences. Cyborg punches the hell out of Count Vertigo (as seen above), and the art really does make you feel the pain and impact as Vertigo pops out of the panel. The color work from Adriano Lucas is also noteworthy, as his use of vibrant colors helps distinguish characters during pivotal scenes as well as in crowded panels. While close-ups and action sequences possess exquisite detail, the designs of characters seen from afar in certain panels aren’t given the same treatment. When all six heroes are seen squished together in small panels, the character details and clarity begin to lack. This can make the overall art feel unbalanced, given how carefully the close-ups of characters and fighting scenes are handled throughout this issue.

While the coloring and designs were well-executed on certain pages, the layout of the panels just didn’t do these characters justice (pun partially intended). We don’t need to see all six of our favorite heroes in every single panel. This only seems to constrain certain panels by pulling so many characters together and muddling the artwork. Perhaps the use of mini, detailed panels featuring one or two characters could’ve improved the art and find a balance of showcasing all our costumed heroes.

For now, JUSTICE LEAGUE #10 will still manage to excite you with its action scenes and hopefully give us a memorable battle against Amazo in the next issue. From the looks of the cover of the next issue, it seems the Man of Steel and the other Green Lantern who were missing from this arc, will return to lend a hand. Make sure to keep on reading to find out what happens next to our beloved League and the case of a evil search engine.