Romance has always been a touchy subject in feminist circles. Within mainstream feminist spaces, which tend to be run by white women, the goal is to get as far away from the role of love interest as possible. This is because, in typical patriarchal media, the most overplayed female character is the love interest, the Good Girl, the prized possession that a male hero can obtain through virtuous actions and bravery. Once claimed, the goal of this woman is to play housewife and reproduce. Obviously, it is demeaning and dehumanizing to have to prioritize some potential dude over your goals, friendships, and identity.

A simple fix is to simply write female characters without any mention of romance. However, Boom! Studios’ ongoing comic JONESY, written by Sam Humphries and illustrated by Caitlin Rose Boyle, does not do this. This comic focuses on a punk Latina high schooler who is actually pretty obsessed with love. In fact, she has powers that allow her to make anyone fall in love with anyone and anything – except for herself! 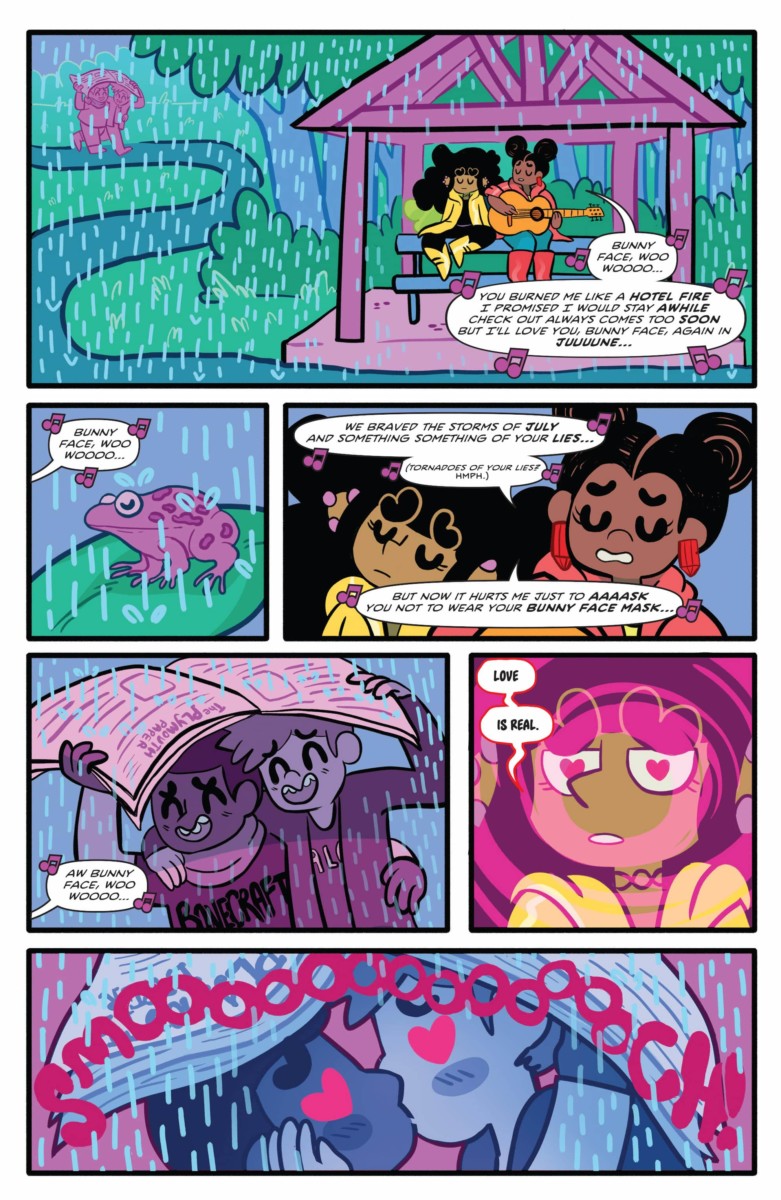 Well, that’s the thing. The romantic lead is NOT the role that all women are forced into. Intersectional feminists (i.e. feminists who don’t just focus on white women’s issues) will let you know that right away. Women of color tend to play the Bad Girl, the counterpoint character that tries to seduce the male hero away from his quest. These women don’t get to be a romantic lead. Instead, they get to be the Asian prostitute or the sassy black woman or the fiery Latina–side characters, lust objects, and foils to the more “pure” white women.

READ: Here’s how misogynoir affects the fandoms of THE VAMPIRE DIARIES and THE FLASH!

When we hear the phrase “strong independent black woman who don’t need no man,” to white women, it sounds inspiring, but to everyone else, it’s just another form of oppression. When you constantly hear that you can never be beautiful or kind or loved, it’s just as constricting as constantly hearing that you must be all these things all the time. 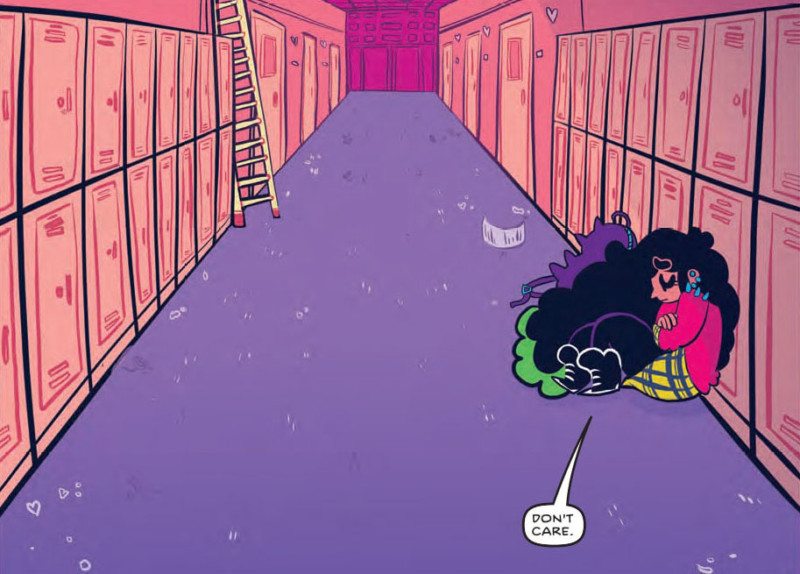 To comic writers, this may seem like a confusing conundrum. How can we write feminist women of color characters without denying them romance but without saying their lives are worthless without romance? Well, that’s where JONESY and it’s titular protagonist come in.

The teenager Jonesy straddles the line between romance and independence constantly. She craves love and attention, fangirling over her favorite singer in a trashy zine that she writes and sometimes using her powers for petty high school revenge. However, she also uses her bravado to mask her insecurities, going on hilarious rants critiquing Valentine’s Day and prom in order to secretly to justify her loneliness at these events–anyone who’s ever been that awkward weird girl who couldn’t get a date can easily relate. 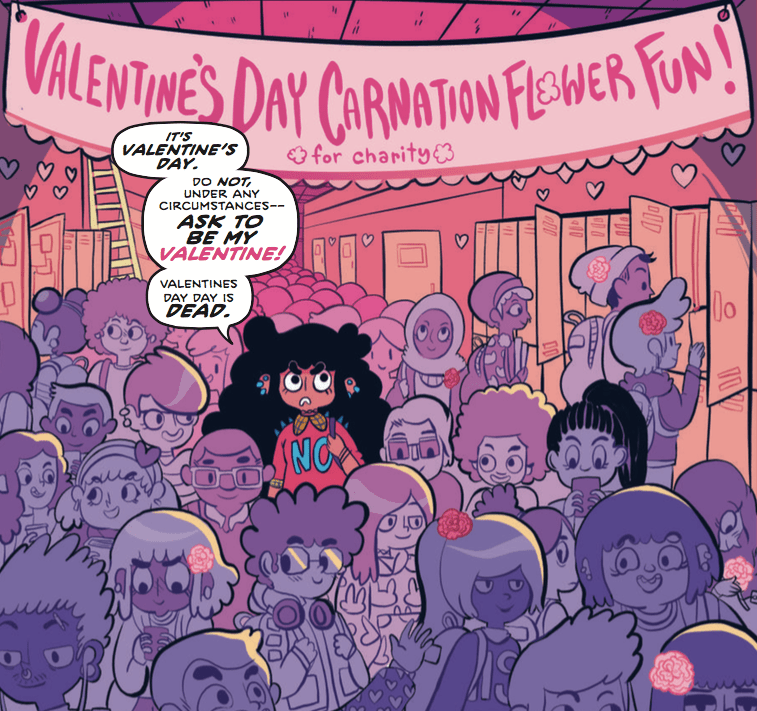 What’s interesting is that a lot of the time, when Jonesy uses her powers for romantic goals, she ends up learning about all sorts of other bonds that are just as important, if not more so. In the first issue, Jonesy ends up becoming best friends with a girl whom she was trying to compete against for male attention on Valentine’s Day. In the third issue, Jonesy attempts to manipulate her father into letting her get a tattoo of her favorite male celebrity, but she ends up getting matching tattoos with her dad instead.

READ: What Jaime Reyes as the BLUE BEETLE does for Latino representation in comics!

Most of her close friends and family are supportive of Jonesy’s desire for romance, but they will let her know when they think she’s hurting herself in the process. For instance, Jonesy’s grandma gives her a special dress to catch the attention of her crush. However, she makes sure to warn her not to change who she is just because a man wants her to. Later on, Jonesy finds herself in this exact situation, and confrontations from both her grandma and her best friend give her the courage to ditch the jerk. 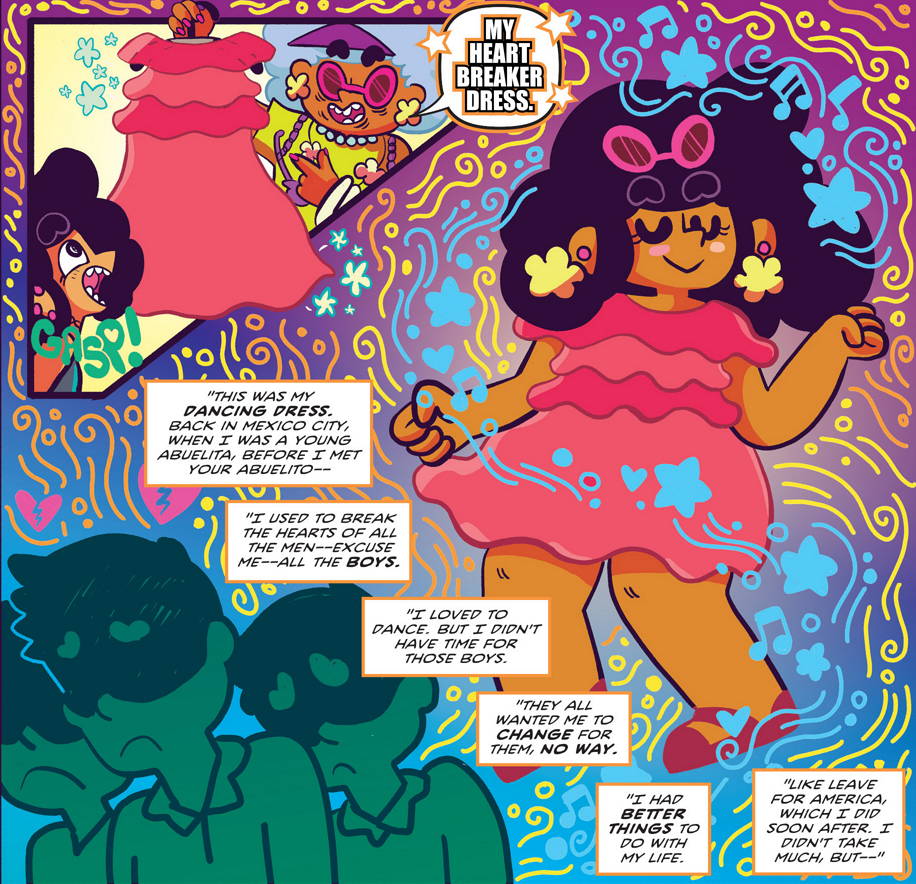 What’s nice here is that Jonesy is genuinely upset after the break-up. She mopes in the rain and asks if she’ll ever find love. However, by the next issue, she’s getting into more misadventures with her friends and improving her relationship with her mom. The story allows Jonesy to grieve a failed romance, but also lets her have a life outside of it and not be totally dependent on some dude for validation.

In general, JONESY is a feminist comic, not through ignoring romance altogether, but through exploring romantic agency. It listens to mainstream feminist critiques of the role of romantic lead while also listening to women of color’s feminist critiques about being denied that same role. In this way, the character of Jonesy is relatable to a much wider range of people. If you’ve ever struggled with balancing your own identity and balancing love, you probably have some Jonesy in you.