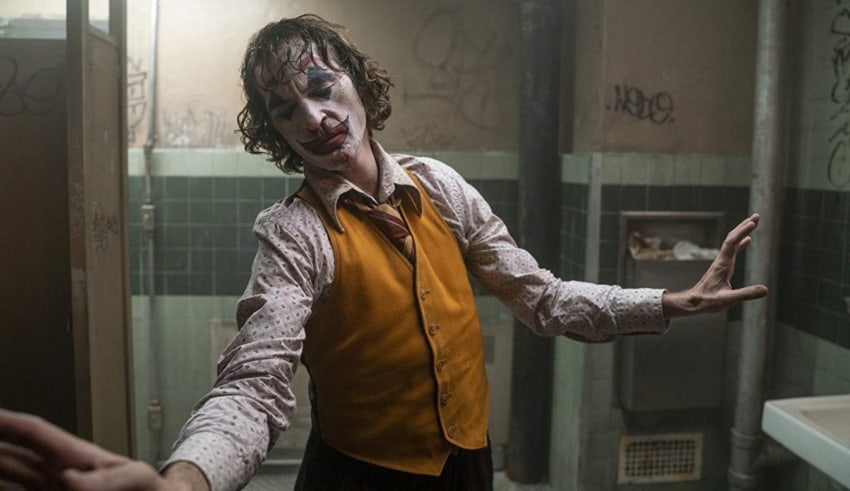 Look, we have been talking about JOKER since the moment it first got announced. We have heard hot takes a plenty, for and against. We have girded ourselves for this release. Now it is here. Let’s not waste time, shall we?

The Idea Behind JOKER

In broad strokes, JOKER tells the story of the birth of a version of Batman’s greatest villain.

To get more granular, it revolves Arthur Fleck (Joaquin Phoenix). A rent-a-clown by day, a wannabe stand-up comedian by night, Fleck wanders a Gotham that is basically NYC circa 1982. If he is not at work or trying to make the stand-up thing happen, he can be found tending to his mother (Frances Conroy).

He lives a life of a certain emptiness, but it seems to be a stable emptiness. However, things rapidly decline as, in short order, a group of teens taunt and assault him, social services cuts leave him adrift, and he loses his job. As even his mother betrays him, in his mind, he tumbles downward towards becoming the Clown Prince of Crime.

The script creates a strong sense of atmosphere and give Phoenix plenty of juicy material to dig into. As explained more below, however, it does little to populate the world around Joker with much besides atmosphere. Fleck is never given a worthy foil, be it a person or a situation.

The screenplay also suffers from being too didactic. For a movie that seems to want to play in the grey, it feels overtly black and white. There is little space for nuance or contradiction in Gotham, it seems.

Casting the Lead of JOKER

Everything you have read and heard is true. This movie exists as a showcase for Joaquin Phoenix’s commitment to the role to be put on full display. He absolutely embraces that offer. His gaunt physique registers everything as a physical assault. A rejection hits as hard as a punch. He shuffles and slouches through the world, only seeming to rise and straighten as he embraces his inner darkness. It is a kind of therapy by violence, something the comic book Joker would no doubt get a giggle out of.

The whirling dervish of content surrounding the movie — up to and including Phoenix’s on-set dressing down of a crew member — cannot obscure the work he does here.

Casting the Rest of the Callsheet

The only problem is that there feels like there is no room for anyone else.

JOKER has assembled a strong supporting cast in Fleck’s life with Conroy, Zazie Beets as Fleck’s neighbor and crush Sophie Dumond. The outside world has Robert DeNiro as Fleck’s talk show host idol Murray Franklin and Marc Maron as the Franklin’s producer. The law gets represented by Shea Whigham and Bill Camp, actors I could watch in everything.

The film, however, does not care about them. They exist with little to no inner life. Maybe it is a reflection of Fleck’s own perspective, they are bit objects, things he wants to act a certain way but never do.

As has been well documented by now, Todd Phillips has dived head first into early 80’s New York to give the film a decidedly Scorsese vision of urban rot. Although initially referred to by some wags as a covert sequel to KING OF COMEDY, it feels a lot more akin to TAXI DRIVER in practice.

It never really moves beyond that shadow. While the movie looks very good and the commitment to NYC recreation is absolute, it never graduates from pastiche. Every shot, every image, seems selected to say, “See! Scorsese!” I love Scorsese (wow, what a unique stance) but he’s made several movies. Homages are great, but one should offer than mere reproduction.

Look, I think you have to work pretty hard and make pretty outright terrible material for me to think a piece of art is inherently “wrong” to create. So take my opinion with that in mind.

JOKER, to me, does not feel like an incitement to violence. That does not mean some might not take it that way, but those that do were looking for a reason. Like video games, heavy metal, and so on, violence in film does not create violence in society.

It is also important to remember that just because a movie features a character, it does not follow that a film endorses said characters’ behavior.

Moreover, despite early buzz to the contrary, JOKER never feels particularly sympathetic to its lead. Even as we watch a litany of pain and humiliation befall him, the film has made Fleck so off-putting, so clearly dangerous even before he becomes Joker, that you never feel his pain. Not really.

That’s not to say JOKER outright condemns its protagonist, I do not believe it does that either. It wants its audience to feel a certain measure of empathy, to see how “society” contributed. It just never mounts a convincing argument.

Truth is, this is not really a groundbreaking exercise in making us sympathize with the Devil. It’s a story we have seen many ways in many other pieces of art. This is not a monster creator on a big screen, it’s just familiar plot in grease makeup.

Joaquin Phoenix delivers an excellent performance in the midst of a movie that is neither the masterpiece we hoped nor the destroyer of society we feared. After all the hype, all the “Just took a glance” takes, it turns out JOKER is just a movie. Not a bad movie, but not an incredible one either. It just feels too derivative, cares too little about most of its characters, to be anything more than just good.

Comic fans will likely feel off-put by the rather hamfisted attempts to connect to the larger Bat mythos rather than embrace the independent nature Phillips has insisted it has.

JOKER, in the end, gives us another indelible version of the Clown Prince of Crime while being a bit disposable as a complete project.