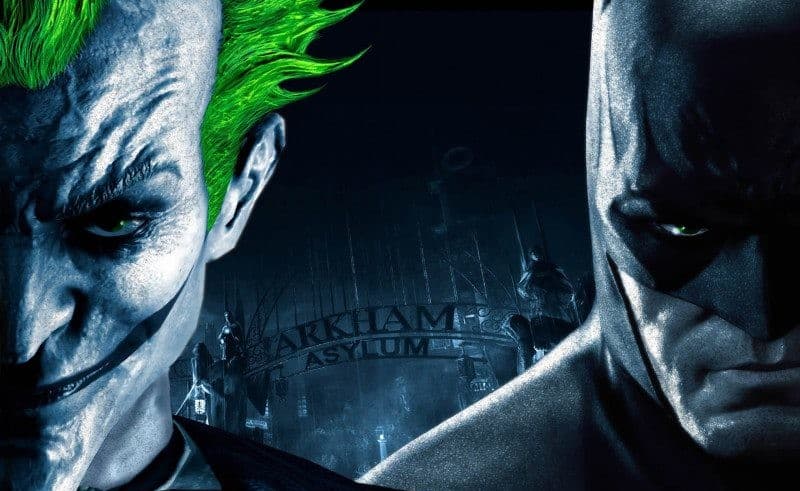 Batman #40 gave us a ‘final’ confrontation between the Joker and Batman – but here are five classic Batman / Joker battles that thrilled, chilled, and ended with a ‘punchline’ that left us gasping! 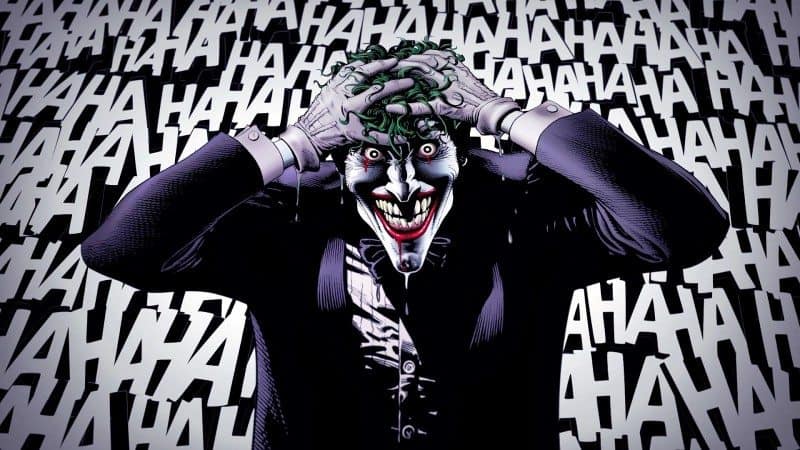 It’s only fitting that within one of Batman’s most iconic storylines lies one of his best clashes with the Joker. What made this clash so epic is that this graphic novel gave its readers its first glimpse into Joker’s past, how “one bad day” could absolutely change everything. This backstory almost humanized the Joker, who up until then was merely seen as a deranged homicidal maniac (which if you asked the Joker, would be taken as a compliment).  It made the experience of the novel even more harrowing to see how far Joker devolved from his once good natured persona.

Batman’s part in this novel comes to a crescendo as he chases down the Joker in a hall of mirrors after the Joker paralyzed Barbera Gordon, and mentally tortured her father, Commissioner Gordon.  As the reader, you really wanted Batman to lay into Joker, and it lept from the page how much Batman wanted to do the same. However, insistence from Commissioner Gordon to “bring him in by the book” forced Batman to remember his code and instead merely beat the living snot out of the Joker—a fair compromise.

Batman: Arkham Asylum was a masterpiece of a game. Finally, fans were able to “become the bat” stalking the night and fighting for justice- and what better way to complete the full “Batman experience” than to pit players against Batman’s greatest foe: the Joker. Borrowing heavily from Grant Morrison’s masterpiece “Arkham Asylum: A Serious House on Serious Earth” this tale saw Batman trapped in the madhouse of Arkham Asylum (and the surrounding island) with the inmates running amuck and the Joker at the helm of the madness.

The plot was enthralling, the characters true to their comic book counterparts, and the voice acting perfect (Mark Hamill is the best Joker in the eyes of this author) – but the best moment, and a large reason why this clash made this top 5 list was the fact that *SPOILERS* the final boss pits Joker doped up on Titan Formula against Batman on the roof of the asylum. I’ll be honest here, it felt amazing to beat the snot out of Joker, to land punch after punch knowing that the Joker could take it. It just wouldn’t have felt as good to beat up the scrawny clown rather than to literally rocket punch a giant Joker in the mouth so hard that his teeth shatter. Pure Bliss. 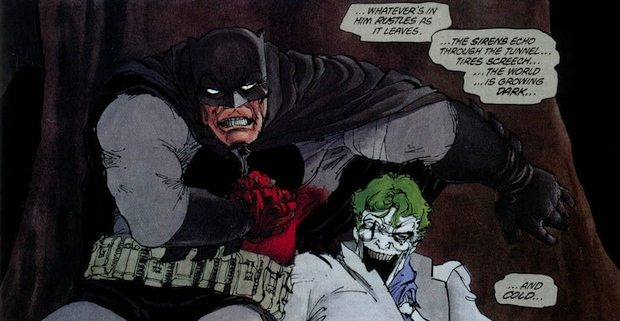 Arguably the “darkest” choice on this list, Frank Miller’s operatic mini series finds a 55 year old Batman forced out of retirement to fight mutants, the government itself, and eventually Superman himself. While the final battle between Supes and Batman is the most well known battle of this series, it’s Batman’s struggle against the Joker that showed how far down the rabbit hole Batman fell, and how much Joker relies on Batman.

In this miniseries, when Batman hung up his cape and cowl – the Joker did the same. Obviously the game wasn’t as fun single player for the Joker as it was with his “player two”, so when a benign Joker (known as only “Joe” in his mundane world) sees a news broadcast of Batman’s return, his trademark manic smile re surfaces and the game begins anew. Joker immediately springs into action killing an entire audience during the filming of a talk show, and takes the patrons of a carnival hostage so that he could get the attention of Batman.  This ploy works, and he and Batman spring into what is easily one of their most iconic battles.

Batman holds no punches as he pummels the Joker, going so far as to throw a batterang into Joker’s eye and snapping Joker’s neck paralyzing him. Just stopping at the precipice of downright murdering Joker, Joker takes the choice out of Batman’s hands, fully snapping his own neck, framing Batman for murder laughing as he dies. The most graphic Batman/Joker fight to date, this battle showed that even on his last nerve, Batman could never kill his arch nemesis. 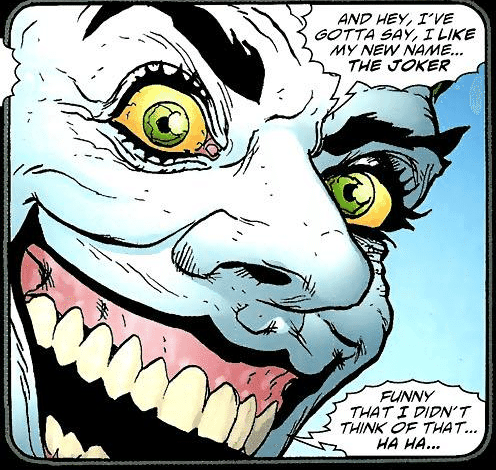 The Man who laughs, while not on every “Top 5 Batman/Joker” list, is nonetheless an important clash in their shared history  that solidified their relationship with one another. In this one shot comic, intended as a successor to “Year One”, Batman comes face to face with the Joker for the first time. Up until then (in the continuity of “Year One” and this book) Batman had only dealt with corrupt politicians, the GCPD, and a few assorted punks and thugs- nothing nearly as chaotic or villainous as the Joker.

The Joker, in this comic, poses a new threat to Batman, a threat which shook Batman to his core and gave him a challenge which he couldn’t intimidate or punch his way through. Though the storyline feels familiar (Oh no, Joker’s going to poison the reservoir and the leaders of Gotham!) the story itself feels fresh and gives Batman his first real moral dilemma as he (literally) holds Joker’s life in his own hands. Batman is faced with either vengefully killing the man who had murdered so many, or saving the Joker, and keeping to his own moral code. Of course Batman chooses the latter, but it’s still not an easy choice to make, but a choice which ultimately differentiated himself from the likes of Joker.

Rounding off the top 5 list comes Scott Snyder’s first Batman/Joker storyline, and boy was it a doozy. The crux of this story focused on the perverse love that the Joker has for Batman, how Joker saw Batman as his King, and he, Batman’s loyal jester. Believing that the Bat-Family (and poor Alfred) only slowed Batman down, impeding Batman from being the “best” foe for himself, Joker creates a plot to rid Batman of them once and for all so that they two may together dance their macabre tango until they both perish. Arguably the most chilling portion of this saga (aside from Joker’s severed face, or the moment where it seems that Joker had ripped the faces off of the rest of the Bat-Family and served them on ice) was the coda where Batman admits to Alfred that after his first encounter with the Joker, he had gone to Arkham to visit him as Bruce Wayne.

As he held up Joker’s calling card to the incarcerated Joker, making it clear his secret identity to the clown prince, Batman recounts that the Joker failed to acknowledge him as Batman, revealing that Joker truly didn’t care who was under the mask. It is Joker’s perverse “Love” turned sour which fuels the “Endgame” storyline and leads both he and Batman towards their demise.

What do you think? Were there any Batman/Joker clashes you think should have been included in the top 5 that weren’t? Are you glad that the Joker and Batman were finally put to rest in “Endgame”? Feel free to let us know in the comments below, and as always- keep laughing.