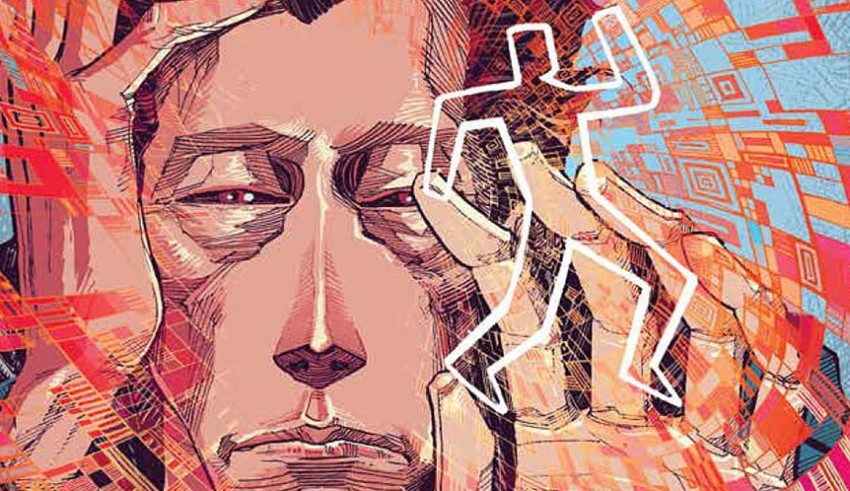 JOHN FLOOD is a lighthearted and compelling introduction to a great character. This 6-issue run is written by Justin Jordan with art by Jorge Coelho. If you have ever, for some strange reason, wished that quirky detectives like Dr. House or Monk were perpetually sleepy, this is the book for you.

After an ill-fated experiment, John Flood no longer needs to sleep and gains supernatural abilities. The detective is in a constant, debilitating “dream-like” state where he can make strange connections that allow him to solve impossible cases. If BBC’s Sherlock’s brilliant brain is a “mind palace,” John Flood’s broken brain is a mind warehouse rave. The unhinged, but prolific, detective recruits a morally conflicted ex-cop, Berry, to help him hunt down a vicious serial killer and track down some lost cats.

For a detective story, JOHN FLOOD is light on any actual detecting. The ambiguous nature of Flood’s dream-state abilities makes it so that neither he nor we are ever really sure if he is indeed deducing the case or just frantically making random connections and getting lucky with the results. Jordan and Coelho have created an almost anti-detective story, where the procedural aspects of the case are irrelevant. We get all of the fun quirks and frazzled genius aspects of classic detective stories, without the lets-pull-off-the-mask and see-how-we-did-it, SCOOBY-DOO cliches. JOHN FLOOD is such an unusual take on the detective genre because he is an incredible detective, yet he has no idea exactly how. 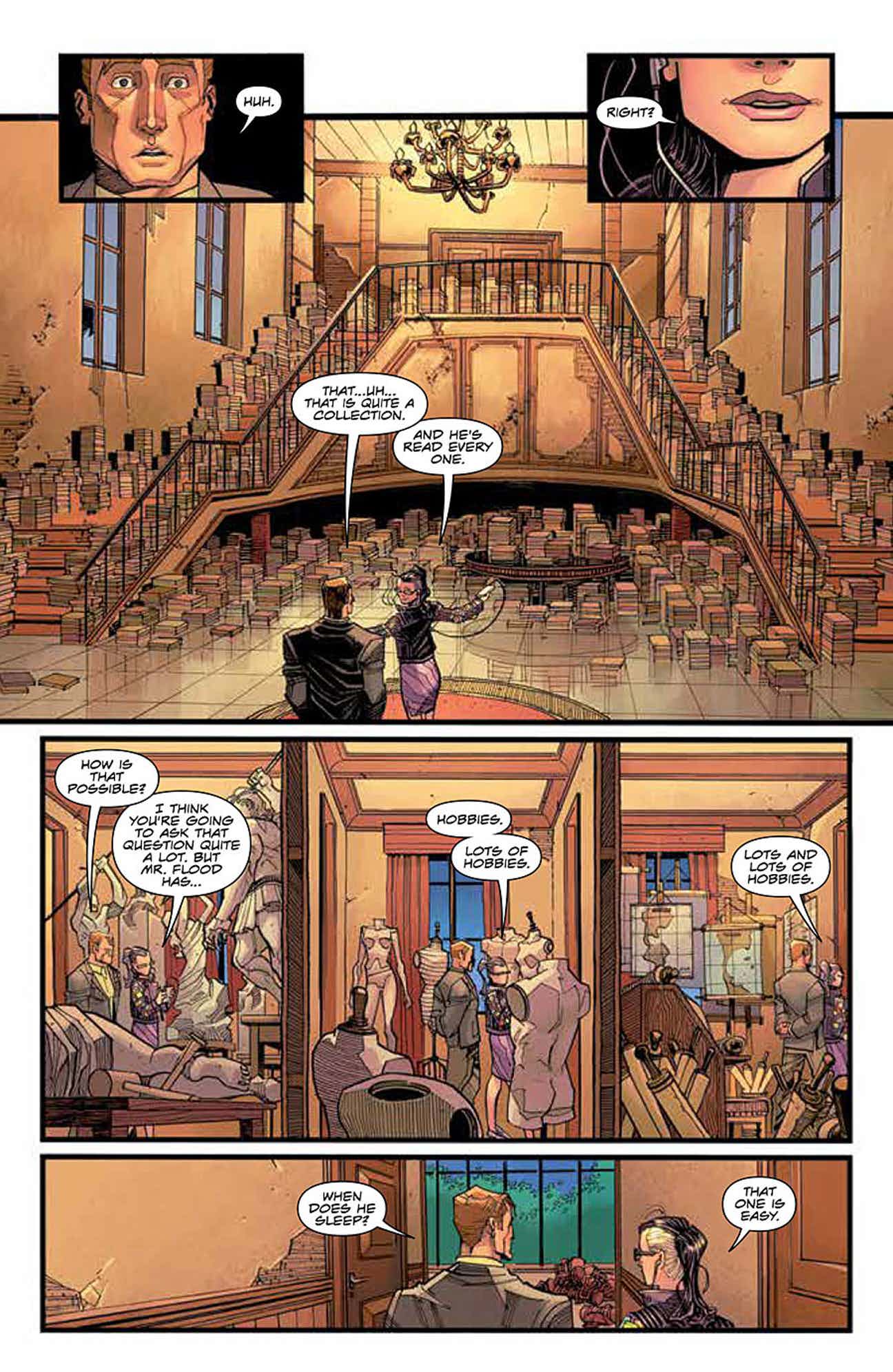 The plot is zany and convoluted in a way that perfectly reflects Flood’s mindset. Point A leads to Point G, which leads to Point Q. The story is surprisingly plot-heavy, considering that he also needs to introduce an entirely new cast of characters. A vicious serial killer is murdering his way across the country, and for some reason sets his sights for John Flood. We follow Berry from the first time he meets Flood to a series of smaller cases, and then eventually to a final confrontation with the big bad and the revelation of a grand conspiracy. The subplots never feel unnecessary or tangential. Through a series of wacky and entertaining machinations, Jordan connects these seemingly unrelated threads and wrap the story up into a neat package at the end.

Jordan’s writing is quippy and light. This book has a Marvel Cinematic Universe vibe to it: nothing is taken too seriously, and the characters take precedent over the plot. Once Flood is introduced, he is instantly memorable. Jordan’s ability to shift Flood from master detective to a bumbling burnout to sympathetic victim of his own supernatural abilities is astounding. Small touches, including his constant usage of the word “like” and questioning of his own plans, make the character seem fully formed. The humorous aspects do not outweigh the harmful realities of Flood’s conditions. Jordan and Coelho constantly keep the reader guessing as to whether Flood is gifted, lucky, or cursed. 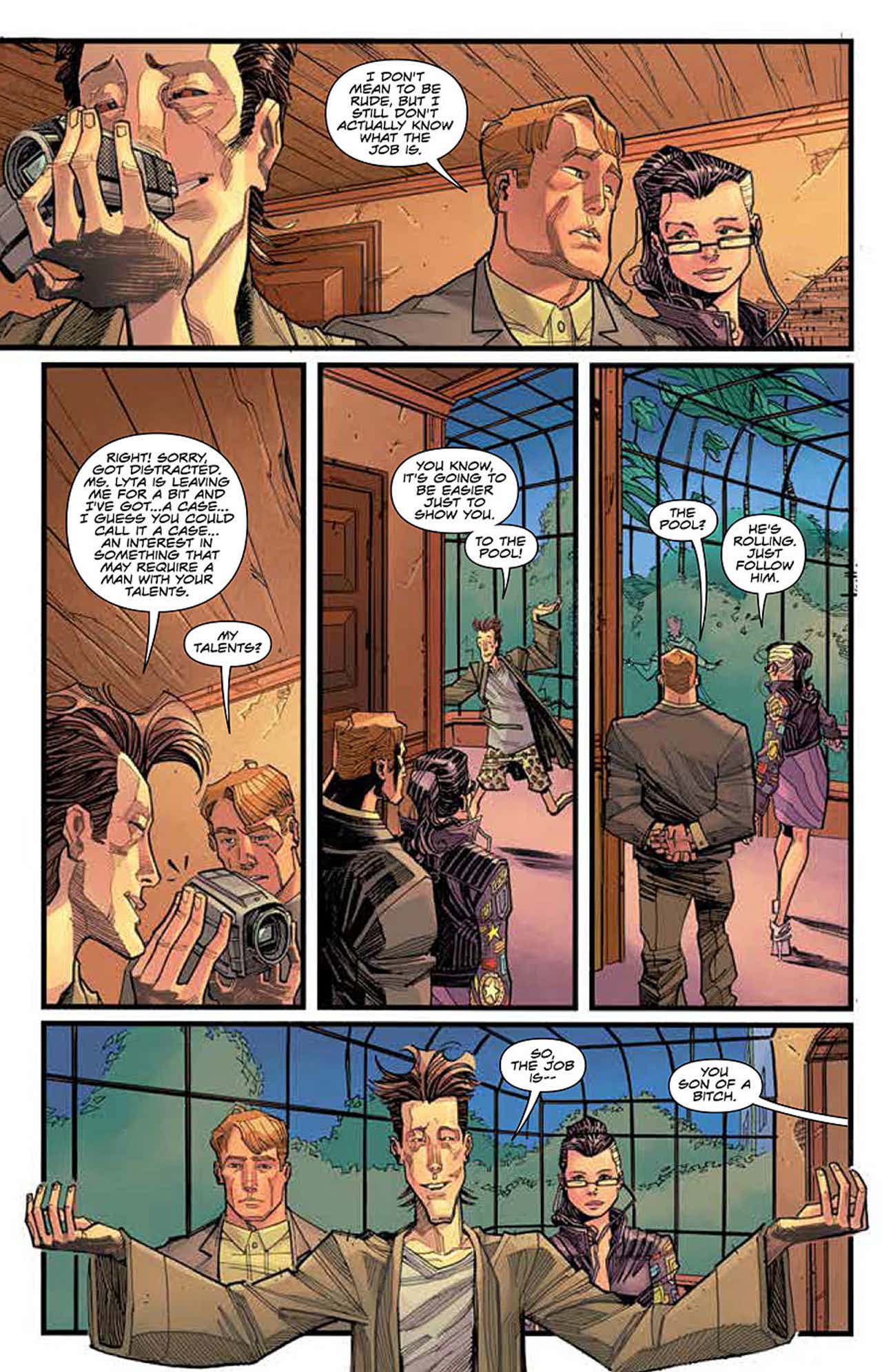 However, like many of the Marvel Movies, the villains and side characters usually take a backseat. Berry is a run-of-the-mill tortured cop character with a dark past. The cops are sufficiently bumbling. The serial killer villain is equal parts brutal and generic. Despite trying to connect the villain to Flood’s backstory, Jordan is never able to make the villain feel like anything more than a platform for Flood’s jokes to bounce off.

Read: Interested in more Boom! Comics? Take a look at our article Why Aren’t You Reading: GOLDIE VANCE

Coelho’s art is perfectly suited for this fun, cartoony story. His big blocky figures and expressive faces perfectly capture the frantic events of the book. The villains are bulky and monstrous, and Berry is always slumping and haggard. The depiction of John Flood is sufficiently gangly and off-balanced. I especially appreciated how he depicted Flood’s face. It is glassy-eyed and confused, without appearing vapid. Coelho’s greatest feat is layering signs of exhaustion onto every emotion Flood has. The body language, facial features, and clothing are all meticulously aimed at portraying the character’s tenuous mental state. 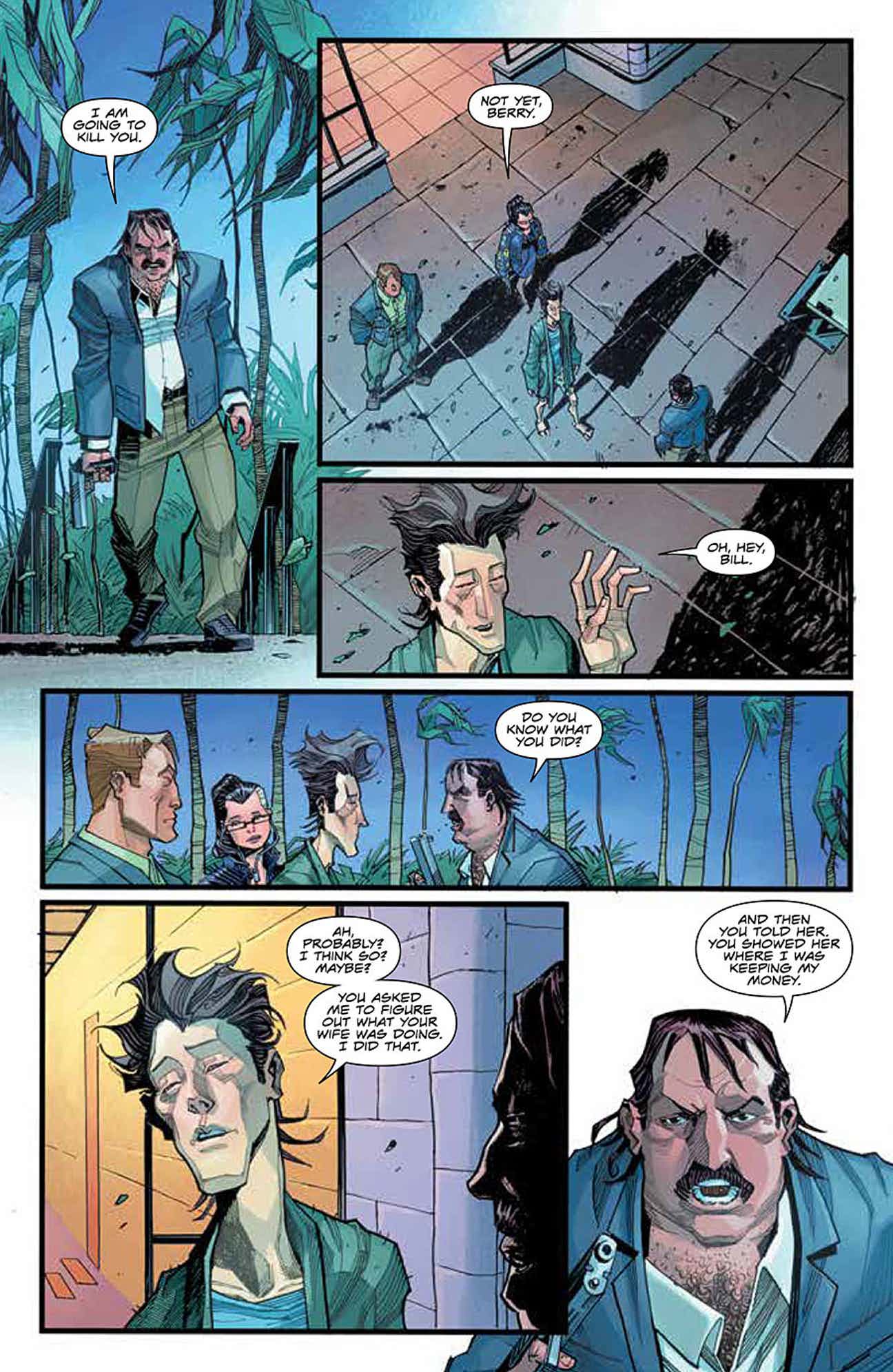 Coelho missed an opportunity with one aspect of the art. Much of the book is told through Flood’s eyes, and we get glimpses into how he perceives the world. Coelho simply crops the art and gives it a red hue. I would have loved to see this talented artist strive for a more creative and vibrant dreamscape, similar to the FX’s LEGION or even FEAR AND LOATHING IN LAS VEGAS. For such a trippy and outlandish concept, the art is tame.

Read: Curious about other offbeat detectives? Here are 5 Things We Want to See in BRITANNIA: WE WHO ARE ABOUT TO DIE

Despite those problems, JOHN FLOOD is a spectacular introduction to a gripping character. While there don’t appear to be plans for more books with him, I’m hoping that one day we might get a deluge of comics starring John Flood.