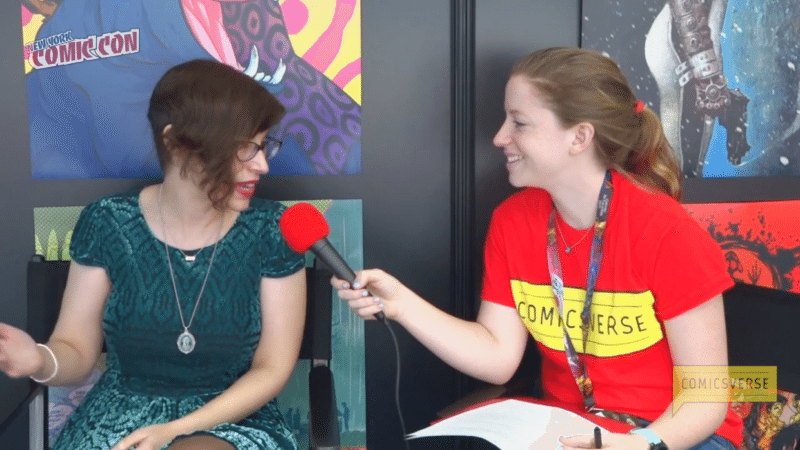 New York Comic Con 2016 was packed with phenomenal artists and writers. Jody Houser is one writer who stood out from the crowd and who we were lucky enough to speak with!

Jody Houser is the writer of many incredible comics like FAITH, MAX RIDE: ULTIMATE FLIGHT, AGENT MAY, ORPHAN BLACK, and the upcoming MOTHER PANIC. For those who don’t know, MOTHER PANIC follows the newest vigilante of Gotham City, Violet Paige, a celebrity heiress who takes revenge on her fellow members of the wealthy elite.

In the interview, Houser explains how she knew she wanted to be a writer at age eight and how she became involved in comics. With experience in two very different forms of writing, Houser compares the art of writing comics to that of writing screenplays. She explains the unique challenges of writing comics, stressing the importance of figuring out how to depict time passing through the use of panels. For aspiring comic book writers, Houser advises looking to your favorite comics to see how the action is paced.

WATCH: Want to see more videos from NYCC 2016? Check out our interview with Bob McLeod!

In addition, Houser discusses collaborating with Tommy Lee Edwards, whose art she claims is reason enough to buy the comic! She also explains how Tommy Lee Edwards and Gerard Way brought the concept of MOTHER PANIC to DC’s new imprint, Young Animals. We then talk about the character of Mother Panic (please forgive me for accidentally calling her Mother Gotham once) and what sets her apart from other vigilantes. Speaking of vigilantes, Houser contemplates the possibility of Mother Panic meeting Batman. She also compares writing FAITH to writing MOTHER PANIC, and whether she prefers writing one over the other.

With as talented a writer as Jody Houser on board, you aren’t going to want to miss MOTHER PANIC when it comes out November 9th!