The long-awaited sequel to Jim Henson’s 1982 fantasy epic THE DARK CRYSTAL is finally here in the form of Boom Studios’ 12-issue comic series. The book, THE POWER OF THE DARK CRYSTAL, which is based on an unproduced screenplay, takes place 100 years after the original film. It tells the story of THE DARK CRYSTAL’s original Gelfling (muppet/elf hybrid) heroes, Jen and Kira, now elderly rulers. A mysterious Fireling, a combustible version of the usual Geflings, needs their help to save her dying home. The book is written by Simon Spurrier and drawn by Kelly and Nichole Matthews.

THE DARK CRYSTAL is technically a children’s movie, but viewers have always appreciated it for the creepy visuals and dark tone. The original film’s world was gloomy, dank, and grimy. Even the good guys were outrageous and distorted. THE DARK CRYSTAL and its spiritual successor, LABYRINTH, are still fondly remembered today as the reason so many millennials needed nightlights. 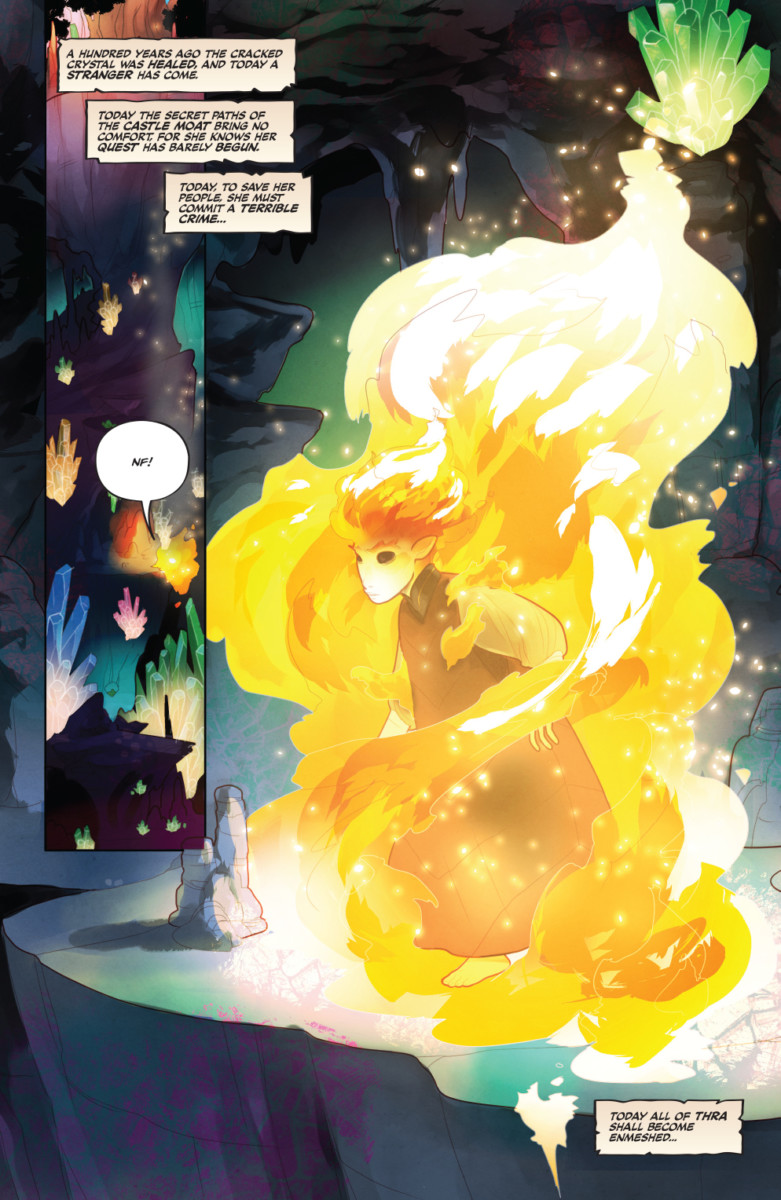 Simon Spurrier’s writing is epic and reminiscent of the film. He easily juggles introducing a new plotline while paying homage to the film and world-building. The films were sparse and limited to a few characters, but Spurrier fleshes out this world and makes it feel lived-in. The politics of the castle, roles of citizens, and events since the film are all laid out in a way that does not seem overly explanatory.

Like most epic fantasy, the story is simple, and the most enjoyable aspect is just being a tourist in its world. Spurrier has always been skilled at world-building (as seen in his work on THE SPIRE, SIX-GUN GORILLA, and JUDGE DREDD), and it will be interesting to see how he further expands on this simple tale. As of now, Spurrier is embracing the lighter fantasy elements of the story and not the more macabre aspects of the film. Hopefully, he will be able to blend the two in future issues.

Spurrier spends the majority of the first issue introducing us to the Fireling Thurma, a mysterious flaming creature who has traveled to the land of the Dark Crystal from another world. We see her backstory, motivations, and small glimpses into who she is as a character. There is nothing groundbreaking to report just yet, but Spurrier has set up a solid foundation.

READ: Looking for more of Spurrier’s work? Read our review of CRY HAVOC #1-6 !

The X-factor of the original films was Jim Henson’s imaginative and grotesque puppets. However, the art by Kelly and Nichole Matthews is more reminiscent of modern, light children’s fantasy, like ADVENTURE TIME and STEVEN UNIVERSE. The colors are bright and saturated, and the illustration is slightly cartoony. The loose, rounded figures and thick outlines give the issue an almost anime-vibe. While, I enjoy the art and think it’s vivid and interesting, it is definitely not what I thought would be in a DARK CRYSTAL adaptation. The art services the story well and does reflect the more positive upturn that the kingdom has taken in the book, but I would like to see the Matthews(es) tear into the creepy roots of the source material. 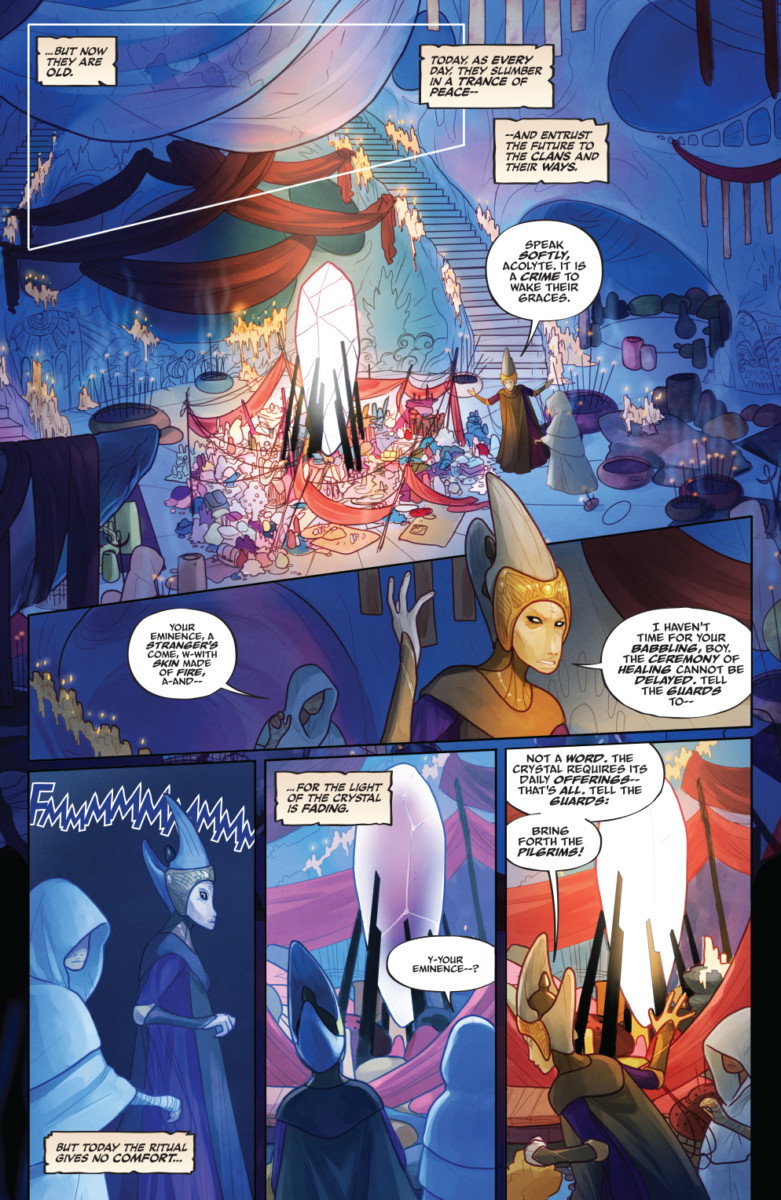 It was also interesting to see how the artists dealt with the fact that the original film 1) Only featured puppets and that 2) These puppets were the most iconic aspect of the source material. It would have been very easy for them to merely rely on Henson’s phenomenal designs. The figures the Matthews use are more lifelike, agile, and expressive, which I really enjoy. In certain adaptations, artists try to copy the source material exactly. I appreciate Kelly and Nichole Matthews putting their spin on these creatures and not drawing a puppet show.

Read: Looking for more magic and fantasy? Read our review of CURSE WORDS #1!

THE POWER OF THE DARK CRYSTAL #1 is a good beginning to what will likely be a fun fantasy epic and homage to the original film. The writing is sharp, and the art is imaginative and new. I am excited to see how this team progresses.