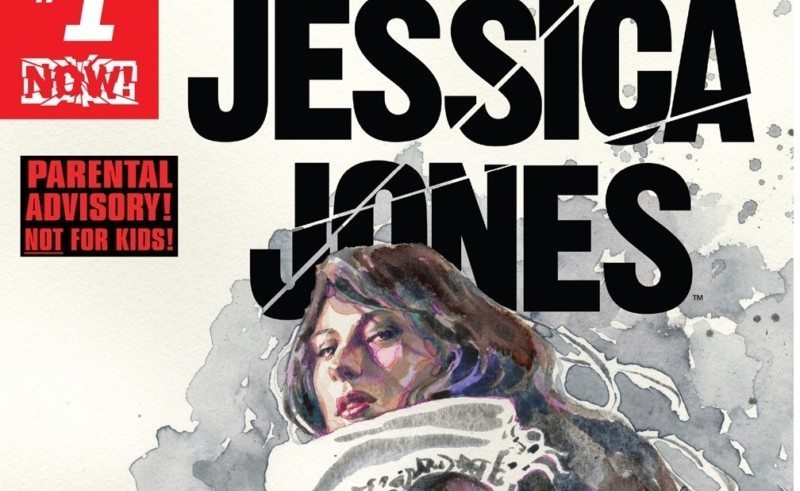 JESSICA JONES #1: THE SEARCH FOR NORMAL starts off with the titular heroine being released from jail. After going through the long procedure of release, she is led to the exit and does what every  prisoner dreams about doing once they get out–leap miles away from jail and land on free ground. 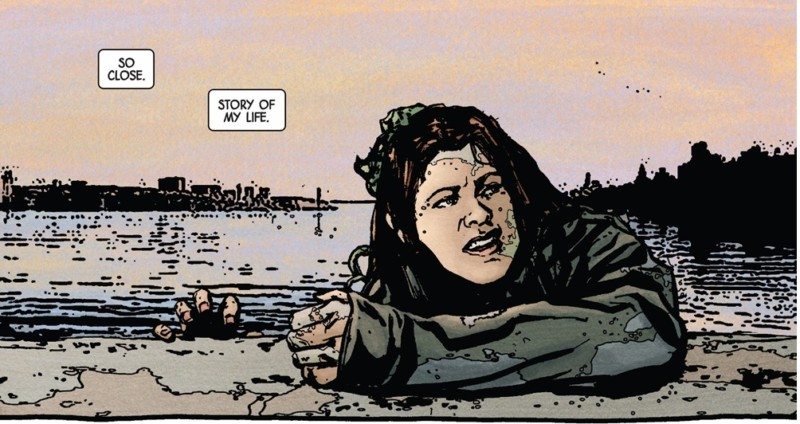 It doesn’t quite work.

But that’s really what this first issue is about–the journey of Jessica Jones trying to find some normalcy and seeing just how impossible that is in the insane world of superheroes. It’s a theme that ties the issue heavily into the Netflix version of JESSICA JONES, as if Marvel wanted to ease the fans raised on the show into the comic book world. It does function well in that regard- the dialogue and interactions with characters like Misty Knight, Jessica Drew, and Carol Danvers mirror the rough, gritty feel of the show. Jessica herself is once again embittered and unwilling to talk to anyone. But for readers that have known Jessica as a wife and mother, it’s a bit disconcerting to see her emulate her earlier days/TV counterpart, almost as much as it must for those TV fans to see so many characters questioning Jessica on the whereabouts of baby Danielle. 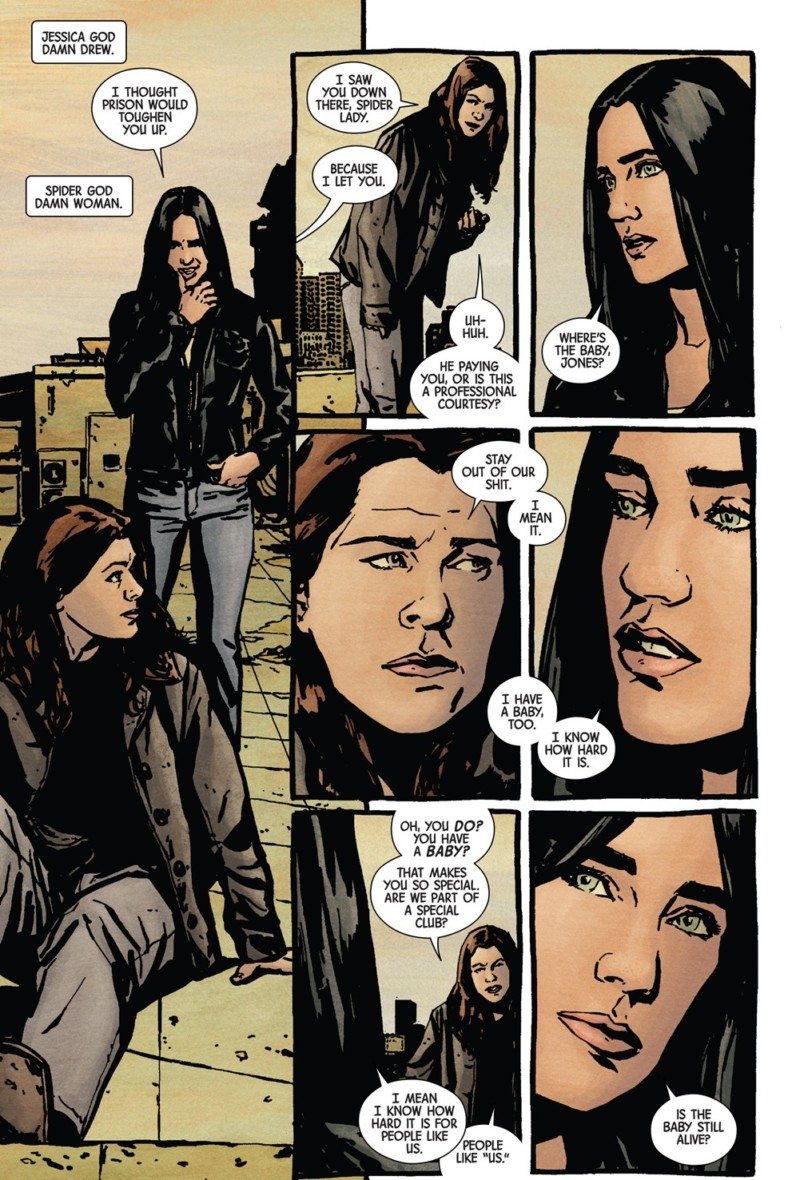 But that’s only a part of the story, as Jessica, desperate for any semblance of normalcy, takes on a new case… which turns out to be a woman who thinks her husband has been replaced with a doppelgänger from another universe. The ‘oh’ from Jessica says multitudes–that’s she’s used to such insanity and that she can’t completely escape it (which is made even more apparent as Ms. Marvel, Miles Morales, and Nova strut on by in the background).  The great artwork of Michael Gavdos shines here, as the gritty noir style showcases the sheer insanity of super-powered teenagers in bright costumes. Brian Michael Bendis keeps up the pace too, as Jessica’s attempts to rationalize things to her client just fall flat when the client reminds her of the world around them. 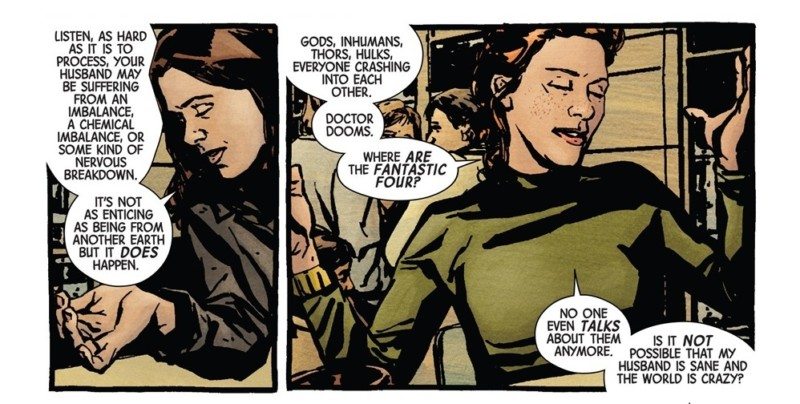 It’s a reminder of what makes Jessica Jones so compelling: that’s she’s a metahuman who willingly walked away from the superhero world and yet can never truly escape it. It’s amazing she can even sit and listen to claims of doppelgängers when all she wants is some sane moments of distraction after all her time in prison and her family problems. But that’s clearly not in the cards, as Jessica can’t even find solace in her P.I. work. The issue ends with us wondering how Jessica will face up to her problems, and pulls the reader in, both the mystery of Danielle and the psyche of her mother.

JESSICA JONES has plenty of potential; there’s the search for a normal life in an abnormal world, Brian Micheal Bendis’s hand on the wheel, the classic ALIAS  style artwork, and the questions that will drive the issues forward for some time (especially when Luke Cage shows up). It still feels like Marvel rolled back the wheel somewhat for the Netflix fans, but this story has the legs to progress from here. 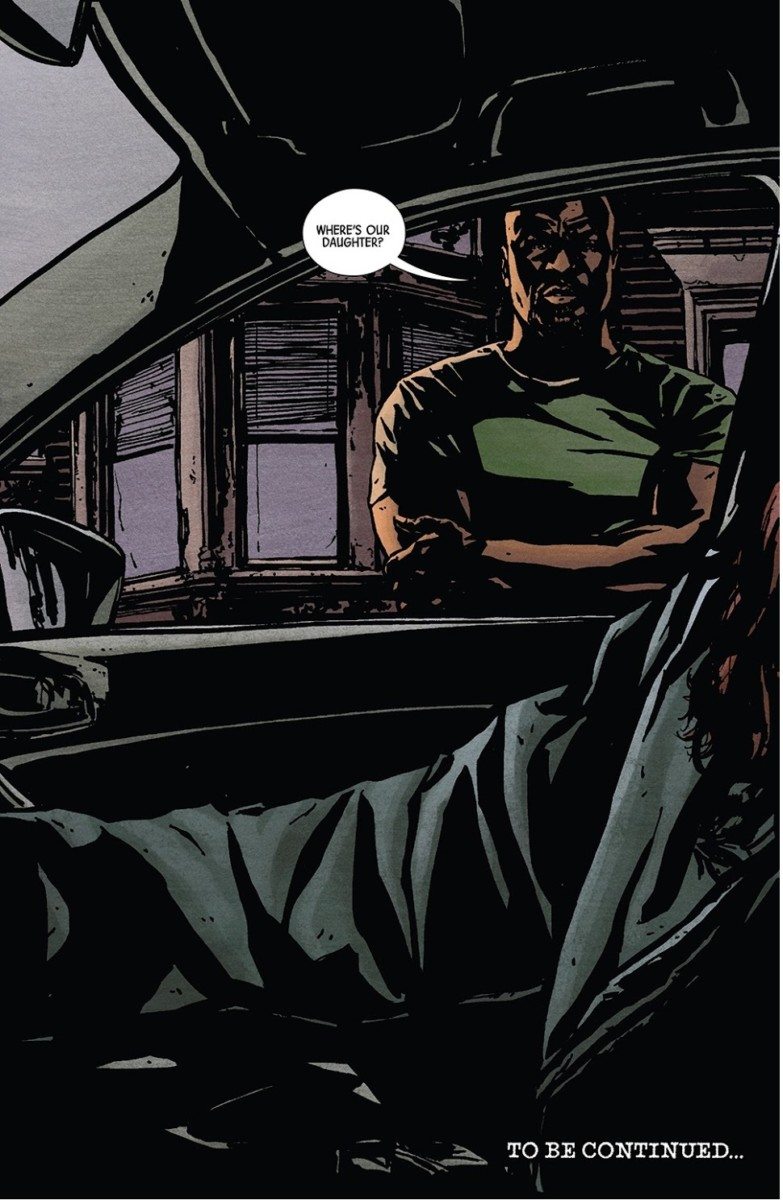