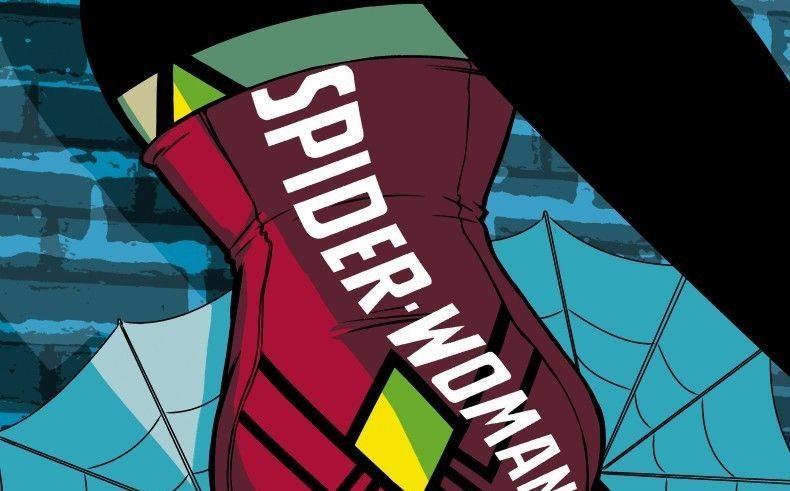 This is the first of a two-part series focused on the two most recent runs of SPIDER-WOMAN, preceding the upcoming SPIDER-WOMEN event.

I picked up the first issue of 2014’s SPIDER-WOMAN because the first four issues of the series were listed on the SPIDER-VERSE checklist, and as it was the first big Marvel event that I was invested in, I approached it with a very completionist mindset. Before even picking up the first issue of SPIDER-WOMAN I had decided to sever my ties with the series after the SPIDER-VERSE event, as I didn’t think I cared about Spider-Woman. Then I read Dennis Hopeless’s run.

READ: For more on SPIDER-WOMAN, check out our article on her issue of TRUE BELIEVERS!

Maybe it isn’t fair to place all of my investment in the title on the creators rather than the characters themselves, but the voice Hopeless lends to Jessica Drew made her instantly relatable and enthralling. She’s sarcastic, just barely put together, and not completely adjusted to life outside of the Avengers. As a second-year college student at an institution that places crippling pressure on its students, I understood why she’d just want to up and leave. 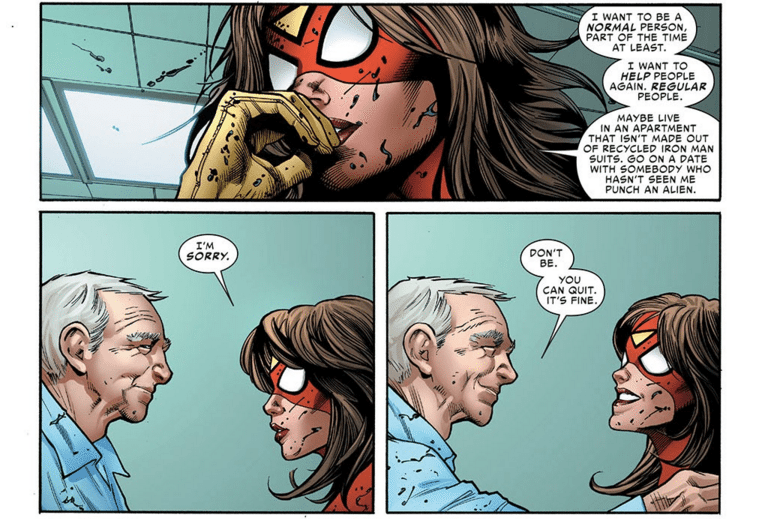 In the post-SPIDER-VERSE/pre-SECRET WARS lull, SPIDER-WOMAN truly stood out. The creative team put together a book accessible to both older fans of Jessica Drew and those like myself who had just been introduced to her. In the midst of a multiverse fraught with time travel, magic, and sprawling space odysseys, SPIDER-WOMAN took Jessica Drew closer to her roots as a street-level hero. After her involvement in the SPIDER-VERSE, Jessica Drew quit the Avengers in order to lead a more ‘normal’ life, and help people directly once again. At first though, Drew has some trouble transitioning away from the heroic lifestyle she led during her tenure with the Avengers. Her first return to solo-heroics resulted in her interrupting a SWAT training mission, landing Spider-Woman in jail with dampened spirits. 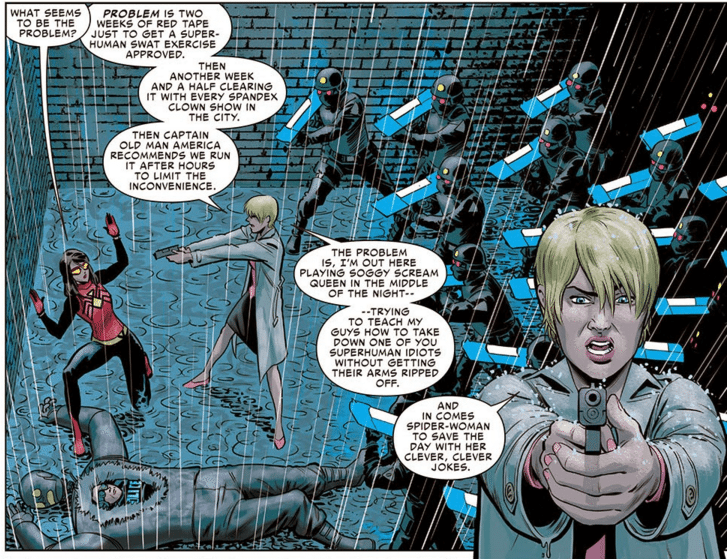 Jessica thought she was doing the right thing, yet was treated as a criminal nuisance. Her reaction, naturally, was anger and confusion. This frustration resonated greatly with me. As of now, I am twenty years old and have spent the vast majority of my life preparing for ‘success’ once I inevitably enter the working world. Throughout my adolescence I held myself to a wildly destructive regimen of studying, often allotting myself less than four hours of sleep in order to cover all of my extracurricular and academic bases. Sure, as I finished high school and entered college I slowly shaped the path that my life would take, weeding out math and science classes as I went along. But the interests I pursued were still confined within the boundaries set forth by what is considered ‘successful’. I was set on going to law school, despite being repulsed by the cutthroat and often corporate nature that going into law entails. Responsibility to outside influences had at some point become more important than the responsibility I had to myself.

During my second year of college, when this run of SPIDER-WOMAN launched, I was in the middle of questioning the path I was on in life. To many of my more traditionally ambitious peers, and to my grandmother this may sound strange, but a comic book helped me make one of the most important decisions in my life. If Jessica Drew could walk away from the immense responsibility that is the Avengers in order to contribute positively elsewhere, I could certainly do the same.

READ: For more firsthand testimony on the impact of comics, check out this letter by the president and founder of ComicsVerse!

I’ve been writing short stories and poetry as long as I’ve had the ability to do so. In my opinion, narrative is one of the most powerful tools that humans have at their disposal.  Though government officials draft and institute laws, change finds its root in ideas, meaning that progress begins with artists, writers, and musicians. Somewhere along the line I was made to forget this. But just as Spider-Woman rediscovered her desire to be closer to the people she was helping, I found something that made me excited to get up every morning. The decision to treat academia as more of what it is meant to be, a learning experience, instead of a means to an end has allowed me to incorporate my love of narrative into my education. I would never have believed it if I had not taken the risk, but doing what you love, even in a professional setting, never feels like work. I am currently pursuing a joint BA/MA in English focused on mental illness in superhero comics, and I couldn’t be happier! And it’s all because of Spider-Woman.