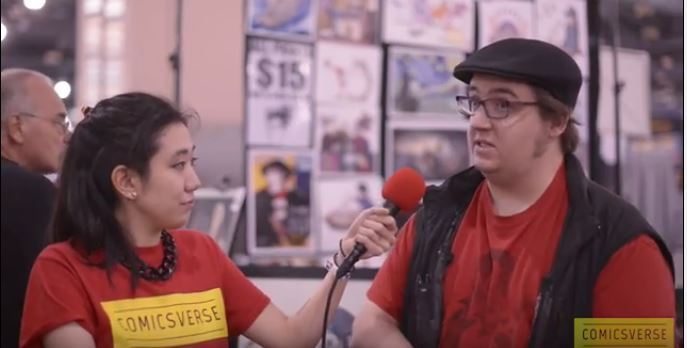 Comic book conventions are an amazing hub for not only comic book creators, but also fans of all artistic forms and storytelling. Wizard World Philadelphia 2016 is no exception! We’re joined by prolific and fun artist, Jesse Rubenfeld, to take a look at a different side of comic book conventions. Not only is he nice enough to let us interview him at his booth and take a look at his pieces, but also kind enough to donate a beautiful “Nausicaa” print for the art raffle we hold at our own booth!

WATCH: Don’t stop now! Watch a bunch of our other video interviews from Wizard World Philadelphia 2016 and more!

Through conversation and showcased work, Jesse Rubenfeld expressed an intense love for both classic cartoons and the great Masters’ work of art history, like Michelangelo and Da Vinci. He’s able to combine the two things in a mix of true artistic skill and genuine enjoyment. While he enjoys making comics, he found that his parodic works were more enjoyable to make and more successful. In many ways, Jessen Rubenfeld stands out as a comic book creator that not only enjoys comic book art, but appreciates all forms and kinds throughout art history.

LISTEN: Want to get into cartoon history? Listen to our Podcast on THE BEST CARTOON HISTORY OF THE UNIVERSE!

Jesse Rubenfeld’s unique artistry can be seen in a Muppets parody of The Last Supper, as well as a commissioned DC-styled Sistine Chapel. His sincere appreciation of the old Masters and art in general can be seen in his oft comedic reinterpretations of old masterpieces. Watch the video to hear what sparked the artistic compulsion, what his specific process is, and what his personal creative preferences are.