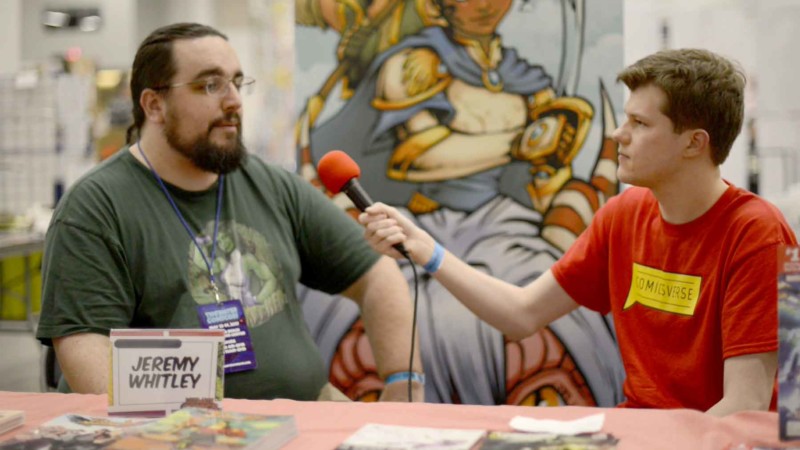 At Tidewater Comicon 2017 in Virginia, ComicsVerse was fortunate enough to speak with comic book writer Jeremy Whitley. In this interview, Whitley spoke with us about his current series at Marvel, THE UNSTOPPABLE WASP, as well as his future aspirations with both Marvel and possibly DC. He also talked about working with the Infamous Iron Man (Victor Von Doom) in the latest issue of THE AVENGERS. Additionally, he gave us some advice about working in the comics industry.

The interview starts out with Jeremy Whitley discussing THE UNSTOPPABLE WASP and his inspiration for writing it. Enjoying the character’s portrayal in Mark Waid’s run on THE AVENGERS, Whitley explains how he wanted Nadia Pym to embody an archetypical type of fun, scientifically minded character that he felt the superhero genre was lacking. He then talked about the unique experience of writing the recently reformed Victor Von Doom and how he interacts with the latest iteration of the Avengers.

Jeremy Whitley on his Favorite Female Characters in Comics

Whitley then told us about the female characters he’d be interested in writing for in the future; including Marvel superheroines that he’s worked with before, such as Misty Knight and Ms. Marvel, as well as DC characters, like Wonder Woman and Bumblebee, that he’s yet to write. After some helpful tips about breaking into the industry, with a focus on persistence and self-promotion, Whitley transitioned to talking about his upcoming work with THE UNSTOPPABLE WASP, PRINCELESS, as well as PRINCELESS: RAVEN THE PIRATE PRINCESS.

Jeremy Whitley on PRINCELESS and MY LITTLE PONY

While Whitley might be best known amongst the mainstream comic book audience for his work with THE UNSTOPPABLE WASP, he got his start in the industry with the creator-owned series PRINCELESS in 2014. The popularity of the title resulted in the spin-off PRINCELESS: RAVEN THE PIRATE PRINCESS in 2016, prior to which Whitley became a regular writer for the IDW MY LITTLE PONY: FRIENDSHIP IS MAGIC series as well as individual issues of various Marvel titles.