In the ’80s television show JEM, more commonly known as JEM AND THE HOLOGRAMS, the Misfits were the rivals and main antagonists of the titular band. They were the ultimate group of bad girls: rude, egotistic, lazy, and sometimes criminal. With the exception of Stormer, being both the sweetest of the group and the “gal pal” of Jem’s band mate, Kimber, there was nothing particularly redeemable about them.

Enter the JEM AND THE HOLOGRAMS comic. This reboot presented a much more sympathetic take on the Misfits. They’re still poorly behaved, cut-throat, and feature an edgier look and musical style than the Holograms. However, the Misfits are also presented as passionate individuals with their own distinct personalities–not just one-dimensional villains. This humanization of the Holograms’ rival band continues as they star in a new spin-off series. 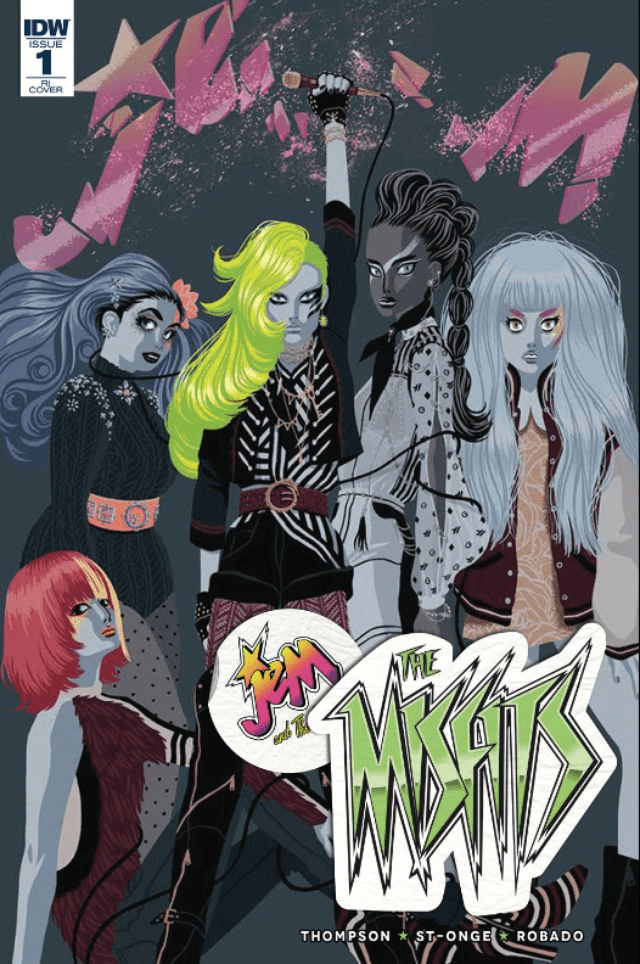 JEM: THE MISFITS is created by an all-female team comprised of Kelly Thompson, Jenn St-Onge, and M. Victoria Robado. In JEM: THE MISFITS #1, the band finds out they have been dropped by their label, 5×5, and no other label is willing to sign them because of their reputation as trouble-makers. Pizzazz, the band’s leader, reluctantly agrees to have the group star in a reality television show to keep the band in the limelight. THE MISFITS #1 also provides the first look at the never-before-explored origin story of this notorious band.

READ: Find out what the ComicsVerse team thought of JEM AND THE HOLOGRAMS: THE OUTRAGEOUS ANNUAL!

As part of the effort to humanize them, THE MISFITS #1 opens with each band member’s rider request. Stormer and Blaze’s requests are pretty reasonable, which compliments their personalities as the softer and least rowdy of the group. On the other hand, Jetta and Pizzazz’s requests come with a note warning not to screw their requests up, or there will be hell to pay. Roxy’s rider is not only the lengthiest but also the most unusual, establishing her as the quirkiest (and hungriest) member of the Misfits. Not only does this provide a humorous introduction to all of the characters, but it also establishes each character as an individual with her own personality. Hopefully as JEM: THE MISFITS continues the audience will be provided a look into each of these characters’ backgrounds.

The origin story in THE MISFITS #1 provides specific information on the band’s leader, Pizzazz, including her upbringing and how her childhood shaped her into both a talented musician and a diva. We see how despite her economic privilege, Pizzazz did not have a perfect life. Her music career is a product of the turmoil of her parents’ divorce and subsequent emotional neglect. Despite her personality flaws, Pizzazz deals with a negative event by throwing herself into a constructive activity. Ultimately, her father’s financial assistance is not the key to Pizzazz’s success as a musician. The key to her success is her tenacity.

The origin story also shows how Pizzazz poached musicians from other bands whose talents she felt weren’t being entirely utilized. Pizzazz is not intimidated or afraid of being overshadowed by these other talented women. She views her bandmates as equals and assets to the success of the band as a whole, not vehicles for her own self-promotion. She ultimately forms a group of strong-willed and obstinate women with huge egos who are determined to succeed at all costs.

READ: Miss the 80’s? Then this analysis of PAPERGIRLS and the politics of nostalgia is for you!

In THE MISFITS #1, we see Pizzazz as a true leader–not the tyrant she’s shown as in the television series. At one point, Blaze approaches Pizzazz and expresses that as the new member, she fears she might be responsible for getting the band dropped from their label. Pizzazz assures her that this is not the case. Furthermore, through a conversation Pizzazz has with the Misfits’ manager, Eric, she expresses that she blames both her rivals and herself personally for what’s happened. However, Pizzazz never once blames her fellow Misfits. 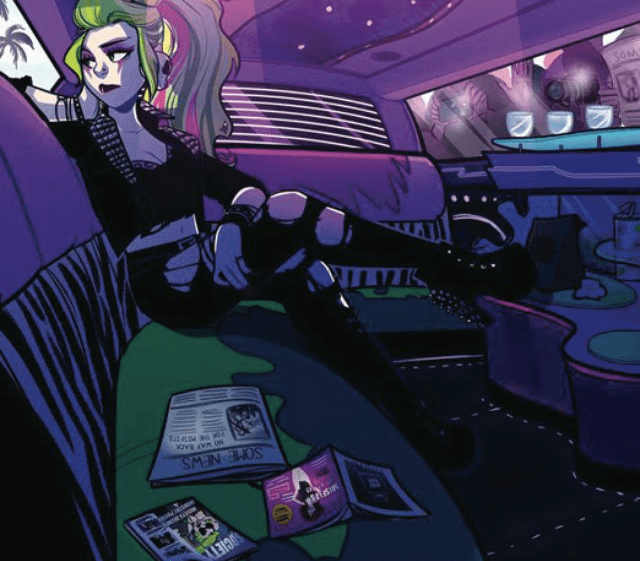 I have to specifically applaud the characterization of Pizzazz in this series, and the JEM AND THE HOLOGRAMS comic in general. Unlike her characterization in the television show, where she is the arch-villain and a vindictive sociopath, Pizzazz is a complex character in THE MISFITS. She cares deeply about her bandmates and her band’s success. Loyalty means everything to her. MISFITS #1 shows Pizzazz as not only the band’s fearless leader but also the “ride or die” kind of friend that everyone needs. Despite still being the primary antagonist of JEM AND THE HOLOGRAMS, Pizzazz is actually a likable and relatable character.

JEM: THE MISFITS #1 offers not only the most sympathetic iteration of the band but also the coolest. The character design demonstrates an understanding of what alternative fashion actually looks like in 2016: nose chains, bleached white hair, and athleisure. THE MISFITS features a more punk rock look and less of the dated 80’s glam rock look featured in the main comic. The Misfits actually, dare I say it, look much cooler than the Holograms ever have in JEM AND THE HOLOGRAMS.

The undeniable coolness of the Misfits might seem like a bad thing, given that the band members are still technically the villains in JEM AND THE HOLOGRAMS. However, given the well-rounded characterization of the band in the main comic and this spin-off, they’re actually not terrible role models for young women. Yes, the Misfits are rowdy and demanding. After all, they are rock stars. Still, THE MISFITS #1 hammers home that the band is comprised of talented and driven women who will not be pushed around or settle for less recognition than they deserve. Although both Pizzazz and her bandmates are not enthused by the idea of starring in a reality show, they all agree to do it since it’s in the band’s best interest. Their determination and camaraderie are definitely admirable.

THE MISFITS #1 provides an in-depth and much-desired look at the Holograms’ notorious rivals. It offers not only a humanizing look at their leader, Pizzazz, but also features the relevant alternative fashion that the main comic sometimes lacks. JEM: THE MISFITS is a must-read for fans of the JEM AND THE HOLOGRAMS comic and fans of strong female characters in general. Admirably, the Misfits are able to defy the concept that stereotypical “bad girls” can’t be good role models. Still, I offer a quick warning to parents: your kid is definitely going to want to dye their hair lime green after reading this.